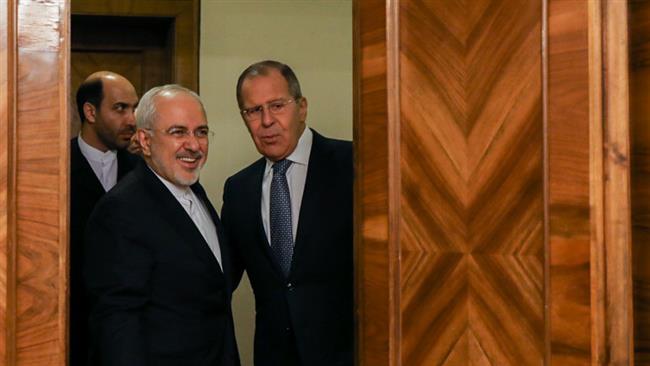 Zarif: “The problem is the US”

Official statements were limited to implementation of the Joint Comprehensive Plan of Action. Iran is facing not only the continuation of US sanctions but their expansion, hampering Tehran’s economic recovery.

Zarif put out the template remarks that Iran, Russia and other parties should closely coordinate efforts for implementation, and that the International Atomic Energy Agency had verified Iran’s commitment to the deal on numerous occasions. He said of the US: “Unfortunately, one of the parties to the JCPOA has not only failed to fully live up to its commitments, but it has also pursued destructive policies in this regard.”

With the Trump Administration threatening more restrictions — possibly cancelling a sanctions waiver on Friday — Iran is trying to separate European countries from Washington.

Lavrov propped up Zarif’s effort, “We will continue to defend the viability of this program and its major importance in securing regional stability and solving the issues of non-proliferation of weapons of mass destruction.”

Returning from Moscow, Zarif answers the question, “How was negotiations with Russians?”:

Negotiating with Russians is always good. Tommorow’s [with European Union] will be good too. The problem is the other one [US].

The Line on Syria

With Russia and Iran continuing to back the Assad regime as it threatens to overrun opposition areas, Zarif preferred to talk about a political process. He said Iran will continue to work with Russia and Turkey through talks in the Kazakh capital Astana and Russia’s repeatedly-delayed proposals for discussions on a “national congress” in Sochi in southern Russia.

The Foreign Minister added that “mutual cooperation on regional issues” served the interests of both countries and international peace and security, and that it had played an instrumental role in the “fight against terrorism and extremism”.

Lavrov pushed the Sochi talks, claimed that complemented rather than superseded UN-backed talks in Geneva, since
“the fraction of radical opposition that is constantly coming up with pre-conditions” might “be disciplined by those who control it”.

Scattered protests continue, almost two weeks after they escalated and spread across Iran.

Footage from outside Evin Prison in Tehran on Wednesday night:

The regime has officially said that it detained 1,800 people at some point during the demonstrations. Activists and a reformist MP say the number is more than double that, with scores still behind bars.

At least two detainees have died in custody. The official account is that they committed suicide.