How UN Failed Over Assad’s Chemical Attacks — Head of Inspectors 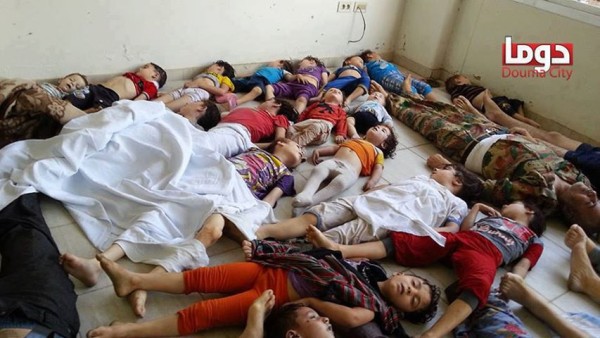 Edmond Mulet, the head of the group investigating chemical attacks in Syria, writes for The New York Times:

On Aug. 21, 2013, a Damascus suburb called Ghouta was attacked with sarin gas, resulting in the deaths of hundreds of civilians.

President Barack Obama had warned that the United States would take military action if President Bashar al-Assad of Syria used chemical weapons. The attack on Ghouta crossed Mr. Obama’s “red line” but he chose coercive diplomacy instead of military action.

Syria acknowledged that it had chemical weapons. The United States and Russia reached a deal in mid-September 2013 under which Syria had to destroy its chemical weapons program.

The Syrian government hurriedly acceded to the Chemical Weapons Convention and turned over what it said was its complete chemical weapon arsenal to a team of experts from the United Nations and the Organization for the Prohibition of Chemical Weapons, which monitors adherence to the convention.

In mid-August 2014, the organization announced that the destruction of the chemical weapons declared by Syria was complete.

Yet the Syrian government has continued using chemical weapons in Syria. Between December 2015 and last November, the organization recorded 121 alleged incidents. In 2016, it confirmed 23 uses of chemicals as weapons between April 2014 and August 2015; its investigations continue.

The Security Council responded by creating in August 2015 a Joint Investigative Mechanism between the United Nations and the chemical weapons organization to identify perpetrators of these atrocious crimes.

From August 2015 to October 2016, a team of investigators looked into eight cases of the use of chlorine as a chemical weapon and one case involving the use of sulfur mustard. Three attacks were attributed to the Syrian government and one to the Islamic State. The Security Council failed to reach agreement on any consequences for these crimes.

A few weeks after an April 4 sarin gas attack on Khan Sheikhoun, Syria, which killed approximately 100 and injured at least 200, I accepted the job to lead the investigative team.

Sarin, a colorless, odorless liquid nerve agent with extreme potency, had been used in Khan Sheikhoun. Its production and use require advanced technical expertise. Exposure to sarin kills within minutes.

Forensics and chemistry were instrumental in the investigations. A Syrian government aircraft was flying over Khan Sheikhoun at the time of the attack, an aerial chemical bomb was launched over the town, and its residents began dying within minutes.

In another incident, in September 2016, Islamic State militants fired a mortar containing sulfur mustard blistering agent from one of their positions. Two women in the village of Umm Hawsh were seriously sickened when they tried to clean the chemical off their homes. The incident showed that the Islamic State retained the ability to produce and use sulfur mustard.

The next day Japan proposed a compromise extension of 30 days to buy time to find a way to ensure continuity of our work. Japan’s proposal also asked the United Nations secretary general for ideas on the structure and methodology of my team.

Despite their differences, members of the Security Council agreed that what we were was doing was important and should be continued. Yet again, Russia and Bolivia rejected the Japanese proposal, effectively ending our work.

By Nov. 17, Russia had cast three veto votes to block the Security Council from extending our authorization.

Russia singled me out as “an instrument of the West” and demanded that my team visit the “crime scene,” which is under the control of Qaeda affiliates. Russia also wanted us to collect samples from the Shayrat air base in Syria. The United States hit the air base with missiles after American intelligence found out that the aircraft that dropped sarin gas over the Syrian town had taken off from there. As the air base, which is spread over about four square miles, had been a former storage site for chemical weapons, sampling would not have proved anything.

Despite our rigorous, technical and scientific work, the Joint Investigative Mechanism came to an end on Nov. 17 after the Security Council failed to extend our mandate. These investigations are critical to ensure that those responsible for the use of chemical weapons, a war crime, face their day in court.

Security Council action is equally important to deter any use of chemical weapons in the future. We owe this to the victims, who have yet to see justice and assistance as they cope with the consequences of these prohibited weapons. The international community has a moral responsibility to act and ensure that their use is stopped forever.