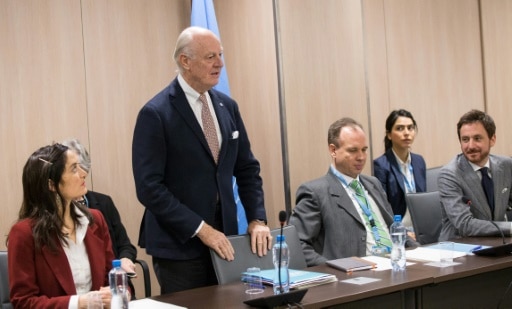 UN envoy Staffan de Mistura has pursued indirect talks between the Assad regime and Syria’s opposition in the third day of discussions in Geneva.

De Mistura moved between the regime and opposition delegations for several hours on Thursday. The two sides were never in the same room, let alone speaking to one another, and the heads of the groups — the regime’s UN ambassador Bashar al-Ja’afari and Nasr al-Hariri of the High Negotiations Committee — left without comments to reporters.

One “Western diplomat” tried to maintain optimism, saying that there will be “fireworks” if the two sides are at the same table, but that countries backing the talks — including Russia and the US — will then release pressure by forcing the delegations into productive discussions.

Formally the talks are over elections, governance, a new constitution, and “fighting terrorism”. However, they have been convened with what may be an irreconcilable division over the future of Bashar al-Assad.

While the reformed High Negotiations Committee includes factions favored by Assad ally’s Russia, it has reasserted that the Syrian ruler must step aside in a political transition. The regime delayed the arrival of its delegation by 24 hours in protest, until Russia assured that Assad’s position would not be on any agenda.

A “European diplomat” said that, while he expected the opposition to be “pragmatic and flexible”, there was little chance of a significant advance:

I think we need baby steps, and we’ve made such little progress in the years gone by, largely because of the regime’s reluctance to engage in this, so to make some small steps now and develop some momentum would be very helpful indeed.

Rebels have claimed the downing of a regime Mi-25 helicopter in southwest Syrian, killing two brigadier generals and a lieutenant colonel.

The helicopter crashed in the Beit Jinn area, where pro-Assad forces have been trying for weeks to overrun rebels, despite the de-escalation zone proclaimed by Russia and the US.

The UN has repeated its call for the Assad regime to allowthe immediate evacuation of civilians from the besieged East Ghouta area near Damascus.

Jan Egeland, the UN’s humanitarian adviser for Syria, said the situation is a “humanitarian emergency”, with nine people had died in the last few weeks while awaiting regime permission to be moved to hospitals only 40 minutes away from the capital.

He called on world powers to help arrange the immediate transfer of 500 people, including 167 children:

Men with power are sitting with lists of children who urgently need to be evacuated in east Ghouta and we still don’t have green light from the government.

Eastern Ghouta, next door to Damascus, is the eye of the hurricane, it is the epicentre of this conflict. At the moment there are 400,000 people there.

For more than four years, the regime has tried to cut off East Ghouta, tightening the siege since March with the closure of tunnels and the last checkpoint for supplies. It has refused almost requests for aid, only allowing in convoys on days when talks have opened in the Kazakh capital Astana or Geneva.

“Our not being able to reach eastern Ghouta for many months in most of the areas has now led to an undoubtedly catastrophic situation,” Egeland said.

Acute malnutrition rates among children there is nearly 12%, above the 10% emergency threshold, and a five- or six-fold increase since January, he added.

Musaab had congenital heart disease with pulmonary hypertension and needed urgent heart surgery that is available 10 km in Damascus but not in besieged #Ghouta. Musaab the 6 months boy passed away this morning.#breakGhoutaSiege pic.twitter.com/Tw3Cweb2Zn

The regime has also stepped up attacks on the area in the past three weeks, despite a Russian agreement with rebels for a de-escalation zone. More than 150 people are estimated to have been killed.

Amnesty International reported on Thursday that the regime has used banned Soviet-made cluster munitions in its latest assaults, killing at least 10 civilians.

The organization interviewed five people in the area, including activists and medical professionals, who described a “severely deteriorating situation”.

Amnesty’s director for the Middle East, Philip Luther, concluded, “The Syrian government is committing war crimes on an epic scale in Eastern Ghouta. Using its familiar, brutal strategy of siege and bombardment of civilians – already employed to devastating effect in Aleppo, Daraya and other rebel strongholds – the population is being forced to surrender or starve.”