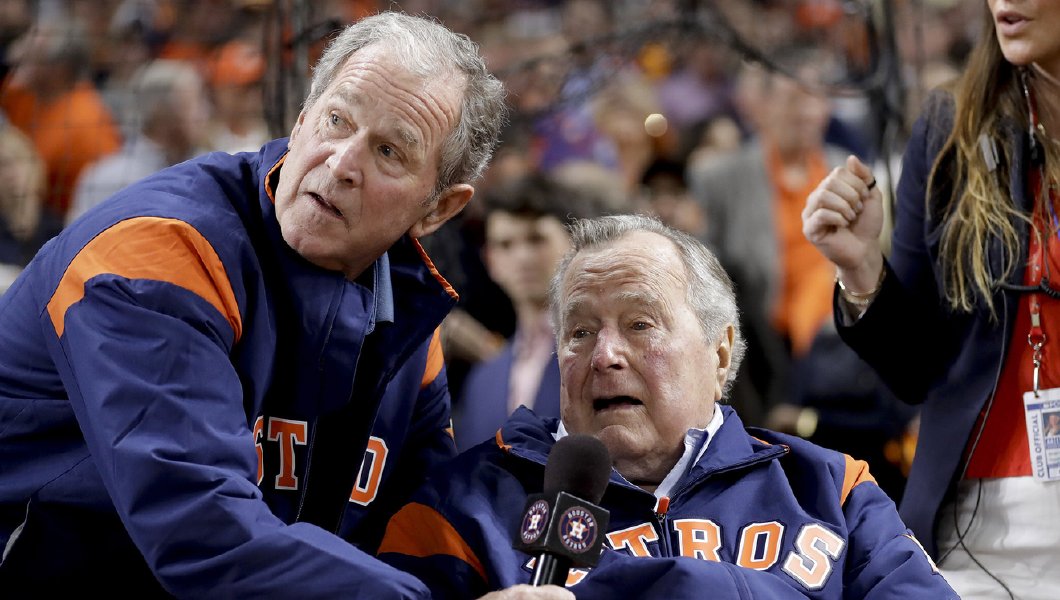 Developments on Day 289 of the Trump Administration:

In the latest criticism of Donald Trump by a former President, George H.W. Bush says in a new book that Trump is a “blowhard”.

Bush’s son, George W. Bush, added to his recent warnings about Trump escalating division, bigotry, and hatred in the US: “This guy doesn’t know what it means to be President.”

The White House struck back quickly:

If one Presidential candidate can disassemble a political party, it speaks volumes about how strong a legacy its past two Presidents really had. And that begins with the Iraq war, one of the greatest foreign policy mistakes in American history.

President Trump remains focused on keeping his promises to the American people by bringing back jobs, promoting an ‘America First’ foreign policy and standing up for the forgotten men and women of our great country.

En route to Japan on Saturday, Trump was uncharacteristally restrained: “I’ll comment after we come back. I don’t need headlines. I don’t want to make their move successful.”

The book, titled The Last Republicans, featured a series of comments from 2016 from the Bushes, father and son of Trump’s Republican primary opponent Jeb Bush. George H.W. Bush said in May 2016, “I don’t like him. I don’t know much about him, but I know he’s a blowhard. And I’m not too excited about him being a leader.”

He said he thought Trump could unite the country, but it would require “humility”, which would be a challenge for Trump.

George W. Bush said, “As you know from looking at my family, (humility) is a certain heritage. That’s what they expect, and we’re not seeing that (in Trump).”

The published comments reinforce more recent concerns of the Bushes and other former and current senior US politicians. In mid-October, George W. Bush used a New York ceremony to denounce misguided nationalism and defended immigration and free trade while bemoaning the “casual cruelty” of political discourse. Barack Obama called for a rejection of the “same old politics of division” that had marked the US in the past, while John McCain — who has repeatedly been insulted by Trump — took issue with “spurious, half-baked nationalism”.

Trump Makes Special Hawaii Stop…to Promote One of His Hotels

During a stopover in Hawaii on the way to Asia, Donald Trump makes a special appearance to promote one of his hotels.

Trump’s scheduled Hawaii visit included appearances at the Pearl Harbor National Memorial and with US troops. However, he reportedly delayed his flight to Japan to see staff at the Trump Hotel in Waikiki.

White House Press Secretary Sarah Huckabee Sanders read a statement that the hotel “has been a tremendously successful project and he wanted to say hello and thank you to the employees for all their hard work”.

Specialists said the promotion of Trump’s business may constitute an ethics violation.

Trump said on assuming office that he would separate himself from business interests but has shown little inclination to do so, continuing to promote Trump hotels and resorts through numerous visits.

6 Weeks Later, Most of Puerto Rico Without Electricity

Six weeks after Hurricane Maria, the large majority of Puerto Rico is still without power.

Island leaders are claiming that almost 40% of electricity generation has resumed, but it is unclear how much power is reaching homes, schools, and hospitals.

CNN tried to establish the situation by calling each of the 78 municipalities. Only 36 responded. Of those, 10 said they had no power restoration. Others estimated from 1% to 20%.

Only four regions reported more than 50% restoration: Ponce and Guayanilla with 60% of residents with power; San Germán, where 75% of buildings have electricity; and Culebra — an island off Puerto Rico that’s home to just fewer than 2,000 people — where the mayor said 90% had power.

Federal authorities have released a 10-year-old immigrant girl with cerebral palsy, after detaining her following her gall bladder surgery.

Rosa Maria Hernandez was taken away by Border Police, who awaited outside her hospital room as she recovered. She was initially taken into custody as she was transported through a checkpoint on her way to a hospital in southern Texas for the emergency surgery.

The American Civil Liberties Union filed a lawsuit seeking her release to her parents, who are undocumented immigrants.