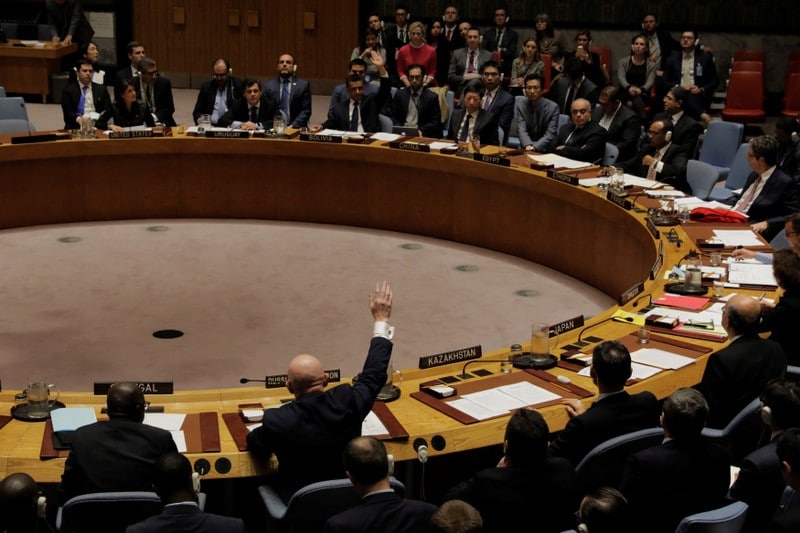 Trying to protect the Assad regime from blame, Moscow vetoed a Security Council resolution extending the mandate of the Joint Investigative Mechanism, established in 2015 for the UN and the Organization for the Prohibition of Chemical Weapons for conclusions of responsibility.

The Russian veto was spurred by a UN-OPCW report last month finding that the Assad regime carried out the April 4, 2017 sarin attack on Khan Sheikhoun in northwest Syria, killing at least 92 people and wounding hundreds.

Since the day of the assault, Moscow and the regime have put out a series of unsupported, contradictory explanations — or even President Assad’s “100%” assertion that the sarin assault was a “fabrication” — to deflect any focus on Damascus’s responsibility. But the October report systematically dissected those scenarios as it concluded that the regime carried out the operation with a Su-22 jet dropping a munition with a sarin canister.

The JIM’s mandate did not extend back to the Assad regime’s August 2013 sarin attacks near Damascus that killed at least 1,400 people. However, it has also found the regime responsible for three of its numberous chlorine attacks since spring 2014, and has blamed the Islamic State for attacks with mustard agent in northern Syria.

The extension of the JIM mandate, which expired at midnight on Thursday, was supported by 11 Security Council members. Russia and Bolivia voted against and China and Egypt abstained.

Russia’s veto was its 10th of a Syria-related resolution since the conflict began in March 2011. Four of the resolutions have concerned chemical weapons.

Russian Ambassador Vassily Nebenzia accused the JIM, an independent body, of being in the service of unnamed Council members, “We need a robust, professional mechanism that will help to prevent the proliferation of the threat of chemical terrorism in the region and you need a puppet-like structure to manipulate public opinion.”

Russia withdrew its rival draft resolution after the Council insisted that it had to be considered before the US-drafted resolution for the JIM’s extension.

After the vote on the US draft, Bolivia requested a vote on the Russian text. That version was supported by only four members. It was rejected by seven, with four abstentions.