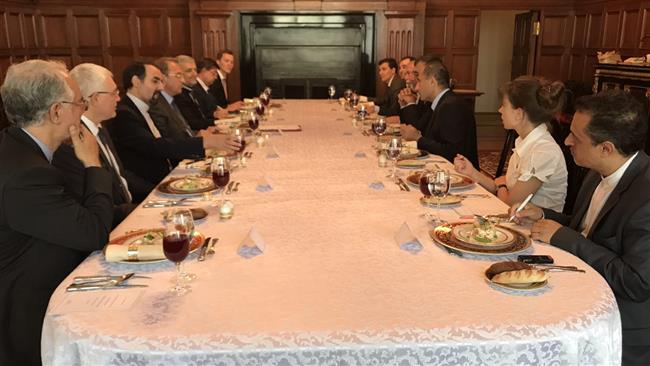 Senior Iranian and Russian diplomats conferred in Moscow on Monday about the Syrian crisis.

Deputy Foreign Minister Hossein Jaberi Ansari led the Iranian delegation. He and his Russian counterpart Mikhail Bogdanov called for the continuation of political and technical talks, which began in January, in the Kazakhstan capital Astana.

No further details were given of Monday’s discussions.

In early May in Astana, Russia, Turkey, and Iran declared four “de-escalation zones” across Syria. However, Iran has been concerned about the continued existence of opposition-held territory in areas such as Idlib Province in the northwest of the country, and its initiative with Moscow is now facing a parallel US-Russian initiative for de-escalation zones, including in southern Syria.

Iran also may be concerned about de facto Russian acceptance of a Syrian rebel base, backed by US special forces, in eastern Syria near the Iraq border. The base at Tanf blocks the establishment of an Iranian ground force for personnel and supplies from Iraq into Syria.

The US has carried out three airstrikes since May, including on Hezbollah and Iranian-backed foreign militias, to maintain a 55-km (34-mile) exclusion zone around the base.

On Tuesday, Iran’s Jaberi Ansari declared the need for delivery of aid, despite the Assad regime’s continued blockage of assistance to hundreds of thousands of besieged civilians in opposition areas. The Deputy Foreign Minister also called for the “formation of a post-crisis political outlook” and the return of displaced Syrians to their home areas.

We are very interested in such vigorous, productive exchange of views and assessments based on trust, the joint analysis of what is going on in the region.

The most important thing is the forecast of agreeing specific steps on how to help the peoples in that region, above all the Syrians, to develop optimal specific solutions concerning security, the cessation of hostilities, while effectively fighting terrorists and tackling humanitarian issues.

He praised Iran’s contribution to the “two important platforms” of talks in Astana and in Geneva.