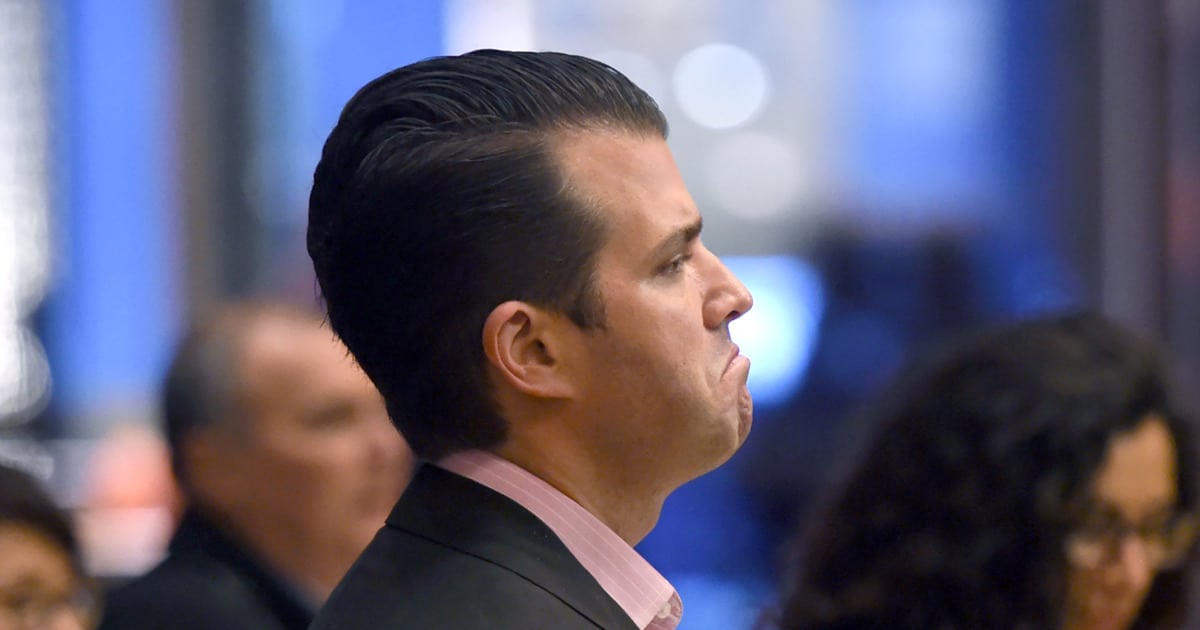 Trying again to play down his meeting with a Kremlin-linked lawyer, Donald Trump Jr. (pictured) has admitted that he was pursuing an offer by the Russian regime to supply material damaging Democratic nominee Hillary Clinton.

Trump Jr. has tried a series of shifting explanations since Saturday to counter the escalating story — first replacing his denial of any contact with Russian officials with a statement that the chat in Trump Tower in June 2016 with lawyer Natalia Veselnitskaya was about “adoptions”, and then saying that Veselnitskaya had surprised him by raising the topic of anti-Clinton material.

But on Tuesday morning, The New York Times established that Trump Jr. knew in advance of the meeting — also attended by Donald Trump Sr.’s son-in-law Jared Kushner and Trump campaign manager Paul Manafort — about the proposal to supply anti-Clinton information. In the afternoon, Times reporters told Trump Jr that they were going to publish e-mails establishing the extent of his knowledge.

Instead of offering a commment, Trump Jr. posted a four-page statement on Twitter, including the e-mails:

Here is page 4 (which did not post due to space constraints). pic.twitter.com/z1Xi4nr2gq

Far from exonerating Trump Jr. over possible collusion with Russian officials, it proves his complicity beyond doubt.

On June 3, six days before the meeting with Veselnitskaya, former British tabloid reporter Rob Goldstone e-mails Trump Jr. that “Emin [Agalarov, son of billionaire real estate developer and Trump associate Aras Agalarov]…asked me to contact you with something interesting”:

The Crown Prosecutor of Russia met with his father Aras this morning and…offered to provide the Trump campaign with some official documents that would incriminate Hillary and her dealings with Russia and would be very helpful to your father.

This is obviously very high level and sensitive information but is part of Russia and its government’s support for Mr. Trump — helped along by Aras and Emin.

Goldstone asked about “the best way to handle this information”, adding that he could “also send this info to your father via Rhona [Graff, Donald Trump Sr.’s assistant at the Trump Organization], but it is ultra senstive so wanted to send to you first”.

Trump Jr. replied, “If it’s what you say, I love it.” He suggested that he “speak to Emin first”. Goldstein replied accordingly, “Let me know when you are free to talk with Emin personally about this Hillary info.”

Three days later, Trump Jr asked, “Could we speak now?” Goldstone replied that Emin, a well-known pop singer, was on stage but could speak in about 20 minutes.

The following day Goldstone reported that Emin asked for a meeting with “the Russia Government attorney who is flying over from Moscow for this Thursday”.

Trump Jr suggested, “How about 3 at our offices? Thanks rob appreciate you setting this up.”

He wrote an hour later, “It will be Paul Manafort (campaign boss) my brother in law and me.” The final e-mail in the chain, dated June 8, is copied to Manafort and Kushner.

Putting out the e-mails, Trump Jr said that he thought the information was “political opposition research”. Directly contradicting the e-mail chain, he insisted, “The woman, as she has said publicly, was not a government official.”

He did not explain why he never reported the meeting — it only came to light last weekend when Manafort and Kushner’s belated confidential filing was described to The New York Times — or why he did not notify the FBI of the approach by the agent of a foreign power.

On Tuesday afternoon, Donald Trump Sr. issued a statement, through White House Deputy Press Secretary Sarah Huckabee Sanders, “My son is a high-profile person and I applaud his transparency.”

Trump Jr. will speak to Fox presenter Sean Hannity, a fervent supporter of the Trump family, on Tuesday night.