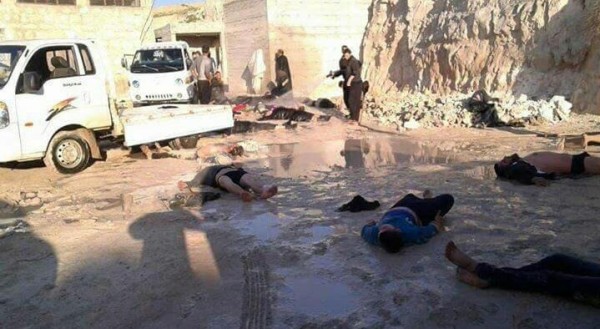 Seymour Hersh on his collapsed explanation of the Khan Sheikhoun nerve agent attack: “I learned just to write what I know, and move on”

For months, defenders of the Assad regime have tried to wish away an assault with “sarin or a sarin-like substance” on April 4 on the town of Khan Sheikhoun in northwest Syria.

Amid contradictory but widely-spread — thanks to Russian and Syrian State media and their backers on social media — statements, President Assad has said the attack which killed at least 92 people and wounded almost 600 was “100% fabricated”. Moscow has tried different scenarios such as rebels carried out a “false flag” attack or a regime jet hit a rebel warehouse filled with chemical stocks.

Seymour Hersh, once a prominent investigative journalist, offered another line of support. Hersh — who also tried to deny regime responsibility for the August 2013 sarin attacks near Damascus that killed more than 1,400 people — said that no sarin was present and that instead medicines and decontaminants had released toxic gases when a rebel building was bombed.

But now Hersh’s portrayal, largely based on a single unnamed American source, has also collapsed following the inquiry of a team from the Organization for the Prohibition of Chemical Weapons.

Following the July 4 publication of the OPCW fact-finding mission report on the April 4 Khan Sheikhoun Sarin attack in Syria, questions were raised about claims made by the veteran journalist Seymour Hersh in his June 25 article in Welt, “Trump‘s Red Line“.

The OPCW FFM report flatly contradicted claims made in Hersh’s article, namely how a Syrian SU-24 supposedly fired a precision-guided munition at a jihadi command-and-control center in the north of Khan Sheikhoun, with the resulting explosion inadvertently releasing toxic gases from “medicines and chlorine-based decontaminants” stored in the basement of the building, along with unspecified weapons and munitions.

Hersh’s claim contradicted the OPCW FFM report, which stated that sarin had been detected in environmental samples and in tests on the victims of the attack. Not only that, but Hersh’s reporting also contradicted claims made by the US, French, Syrian, and Russian governments.

Until July 26, both Welt and Hersh have been quiet about the obvious contradictions between their claims and the OPCW FFM report. This changed when Charles Davis, editor at ATTN.com, emailed Hersh and asked him to comment on the fact the OPCW FFM report contradicted his claims published in Welt.

Hersh offered no defence of his work, stating that he had “learned just to write what I know, and move on”, and recommended that Davis contact two individuals: Ted Postol, and former UNSCOM inspector Scott Ritter.

With Hersh now offering up Postol and Ritter, it is worth reviewing their statements on the chemical attack, and seeing if they offer any information that supports the claims made by Hersh in Welt.

Ted Postol, professor emeritus of Science, Technology, and International Security at the Massachusetts Institute of Technology (MIT), has become rather notorious among those who follow the conflict in Syria after his work with the late Richard Lloyd on the August 21st, 2013 Sarin attacks. During his work on the attacks with Lloyd, he analysed the ranges of the rockets used in the attacks, and came to believe, based on maps published by the White House of areas of control in Damascus, that the range of the rockets would have required them to have been launched from rebel territory, the implication being that the attack was therefore a false flag carried out by the rebels to blame the Syrian government.

While open source evidence clearly showed government forces would in fact have been in recently captured territory within the 2-2.5km range Postol and Lloyd proposed for the rockets, Postol continued to promote his theories. He gained particularly notoriety when he sought expertise on chemical weapons not from the MIT chemical engineering department or experts in the field of chemical weapons, but from Maram Susli — also known as Partisangirl or Syrian Partisan Girl — a chemistry student in Australia best known for her YouTube videos detailing conspiracy theories and her support of the Syrian government.

Following the attack in Khan Sheikhoun, Postol released a series of reports. These were widely cited by conspiracy websites and Russian news sites, such as Russia Today and Sputnik. They were even referenced by Alexander Yakovenko, Russian Ambassador to the United Kingdom, in his attacks on the OPCW FFM report. However, despite Postol’s publication of nearly a dozen articles on the subject, there was little interest in them from the mainstream media.

While many of Postol’s supporters claimed this lack of interest was just another sign of the mainstream media’s bias against Syria and Russia, it is more likely that the poor quality of his work — both with the August 21 Sarin attack and the Khan Sheikhoun attack — was responsible for the lack of coverage.