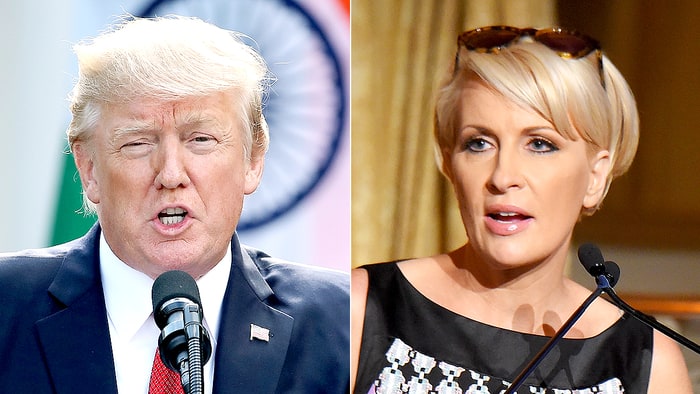 GOP Senator Lisa Murkowski: “Do you want to be remembered for your tweets or your accomplishments?”

Developments on Day 161 of the Trump Administration:

Apparently angered by an item on MSNBC’s Morning Joe, hosted by Brzezinski and her husband Joe Scarborough, Trump posted:

…to Mar-a-Lago 3 nights in a row around New Year's Eve, and insisted on joining me. She was bleeding badly from a face-lift. I said no!

As soon as Trump’s tweets appeared, readers responded with anger, satire, and remorse over the current occupant of the White House. The incident highlighted issues over Trump’s attitudes towards women, after a series of revelations during the 2016 campaign of his denigration, harassment, and sexual aggression towards women.

Some observers noted that Trump might have jeopardized any hope for the troubled Senate healthcare bill. Two women — Susan Collins of Maine and Lisa Murkowski of Alaska — are among the GOP Senators whose reluctance to support the mesaure led to a delay in a final vote scheduled for Friday.

Both Collins and Murkowski reacted to Trump’s attack on Brzezinski:

This has to stop – we all have a job – 3 branches of gov’t and media. We don’t have to get along, but we must show respect and civility.

Stop it! The Presidential platform should be used for more than bringing people down.

@POTUS, do you want to be remembered for your tweets or your accomplishments?

Collins later said in an interview:

My first reaction was that this just has to stop, and I was disheartened because I had hoped the personal, ad hominem attacks had been left behind, that we were past that.

I don’t think it directly affects the negotiation on the health care bill, but it is undignified — it’s beneath a President of the United States and just so contrary to the way we expect a president to act. People may say things during a campaign, but it’s different when you become a public servant. I don’t see it as undermining his ability to negotiate legislation, necessarily, but I see it as embarrassing to our country.

Other Republican Senators joined the Twitter criticism. Ben Sasse said Trump’s tweeting “isn’t normal and it’s beneath the dignity of [his] office”. James Lankford cautioned, “The President’s tweets today don’t help our political or national discourse and do not provide a positive role model for our national dialogue.” And Lindsey Graham of South Carolina wrote:

Mr. President, your tweet was beneath the office and represents what is wrong with American politics, not the greatness of America.

Trump’s wife Melania Trump, who had proclaimed that she will lead a campaign against cyberbullying — said through a spokeswoman: “As the First Lady has stated publicly in the past, when her husband gets attacked, he will punch back 10 times harder.”

[UPDATE: On Friday morning The Washington Post published a column by Brzezinski and Scarborough, “Donald Trump is Not Well”: “Our concerns about his unmoored behavior go far beyond the personal. America’s leaders and allies are asking themselves yet again whether this man is fit to be President.”]

State officials from Virginia, California, and Kentucky say they will refuse a request for voter roll data from Donald Trump’s commission on election integrity.

The commission has sent letters to all 50 states asking for voters’ names, birthdays, the last four digits of their Social Security numbers, and their voting history dating back to 2006.

Virginia Governor Terry McAuliffe, saying he has “no intention” of fulfilling the request, declared that it is based on the “false notion” of widespread voter fraud in the November Presidential election.

Donald Trump has made the unsubstantiated claim that millions of people, including undocumented immigrants, voted illegally for Hillary Clinton.

“At best this commission was set up as a pretext to validate Donald Trump’s alternative election facts, and at worst is a tool to commit large-scale voter suppression,” McAuliffe stated.

Kobach is the vice chairman of the voter fraud panel, whose first meeting is scheduled for July 19 in Washington.

The President created his election commission based on the false notion that “voter fraud” is a widespread issue – it is not.

Indeed, despite bipartisan objections and a lack of authority, the President has repeatedly spread the lie that three to five million illegal votes were cast in the last election. Kentucky will not aid a commission that is at best a waste of taxpayer money and at worst an attempt to legitimize voter suppression efforts across the country.