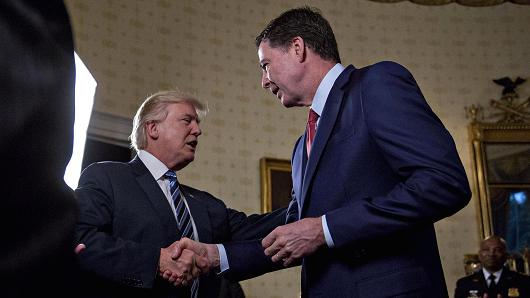 Developments on Day 110 of the Trump Administration:

Also: Top GOP Senator Hatch “Public Wants Every Dime They Can Be Given”

Donald Trump has fired FBI Director James Comey, days after Comey testified for the second time before the House Intelligence Committee on possible links between Trump associates and Russian officials.

The sudden dismissal of Comey is being compared by analysts to Richard Nixon’s dismissal of Special Prosecutor Archibald Cox during the Watergate investigation in 1973.

Comey was scheduled to appear before the Senate Intelligence Committee as it opened its Trump-Russia hearings on Thursday.

FBI officials said they were not immediately aware of Comey’s dismissal. The letter was apparently hand-delivered to the FBI by Trump’s long-time bodyguard and the Director of Oval Office Operations, Keith Schiller. Comey learned the news from TV as he spoke at the FBI office in Los Angeles.

While I greatly appreciate you informing me, on three separate occasions, that I am not under investigation, I nevertheless concur with the judgment of the Department of Justice that you are not able to effectively lead the bureau.

It is essential that we find new leadership for the FBI that restores public trust and confidence in its vital law enforcement mission.

A White House statement said, “The FBI is one of our nation’s most cherished and respected institutions and today will mark a new beginning for our crown jewel of law enforcement.”

Deputy Attorney General Rosenstein gave the rationalization that Comey usurped the power of the Attorney General on July 5, 2016 when he announced that an initial investigation of Hillary Clinton’s e-mail servers had not found criminal activity:

I cannot defend the director’s handling of the conclusion of the investigation of Secretary Clinton’s emails, and I do not understand his refusal to accept the nearly universal judgment that he was mistaken.

Then in late October, when Comey announced the reopening of the inquiry — a step that Hillary Clinton believes cost her the November 8 election — Trump was effusive in his praise.

Only last week, Trump was pressing Comey to continue the investigation, accusing the FBI Director of giving Clinton “a free pass for many bad deeds” by deciding not to recommend criminal charges in the case.

Earlier Tuesday, the FBI notified Congress that Comey overstated findings involving the Hillary Clinton e-mail investigation during his testimony last week, saying that only a “small number” of Clinton’s e-mails had been forwarded by her assistant Huma Abedin to disgraced Congressman and Abedin’s husband Anthony Weiner.

Comey has said “hundreds and thousands” of e-mails were forwarded.

The White House line that Russia had nothing to do with Comey’s dismissal was soon undermined by the revelation that Trump considered the firing for more than a week.

Two White House advisors said Trump was enraged by the Trump-Russia investigation and frustrated by his inability to control the narrative. He repeatedly asked aides why the inquiry would not disappear, sometimes screaming at television reports.

The sources reinforced last week’s prediction, made by a purported anonymous White House insider, that Trump would soon remove Comey:

Pres just can't help himself re: Comey. Keeps kicking the hornets nest. "I really should fire him. He's been so terrible to me."

After despatching the letter, Trump made called Senators, asking for support. White House officials believed the move was a “win-win” because Republicans and Democrats have both raised issues about Comey, “one person briefed on their deliberations” said.

But the Democratic leader in the Senate, Charles Schumer, quickly dispelled that optimism. He told Trump that the step was a mistake, and the President seemed “taken aback”.

Cryin' Chuck Schumer stated recently, "I do not have confidence in him (James Comey) any longer." Then acts so indignant. #draintheswamp

Throughout Tuesday evening, the President watched TV coverage, frustrated that no one was defending him. Two White House officials said there was no communications strategy for the firing, with given talking points late Tuesday for hastily-arranged media appearances.

A White House official said no plans had been made for a replacement: “If there’s a list, I haven’t seen it.”

The White House fired Comey with no replacement set, with no clear messaging and no legal experts or surrogates lined up.

As Democrats denounced the firing, senior Republicans — including the chair of the Senate Intelligence Committee, Richard Burr — expressed concern.

“I am troubled by the timing and reasoning of Director Comey’s termination,” Burr said in a statement.

Dir. Comey has been more forthcoming w/ information than any FBI Director I can recall in my tenure on the congressional intel committees.

John McCain said he was “disappointed” by the incident, while Bob Corker, who chairs the Senate Foreign Relations Committee, said, “[Comey’s] removal at this particular time will raise questions. It is essential that ongoing investigations are fulsome and free of political interference until their completion.”

Representative Justin Amash said he will introduce legislation forthe creation of an independent commission to investigate the Trump-Russia links.

Top GOP Senator Hatch: “Public Wants Every Dime They Can Be Given”

Orrin Hatch, the longest-serving Republican in the Senate, has said that those who are seeking assurances about health care are trying to grab money from the State:

The public wants every dime they can be given. Let’s face it, once you get them on the dole, they’ll take every dime they can. We’ve got to find some way of getting things under control or this country and your future is going to be gone.

Hatch is the chairman of the Senate Finance Committee, which has jurisdiction over Medicaid and other health care issues.