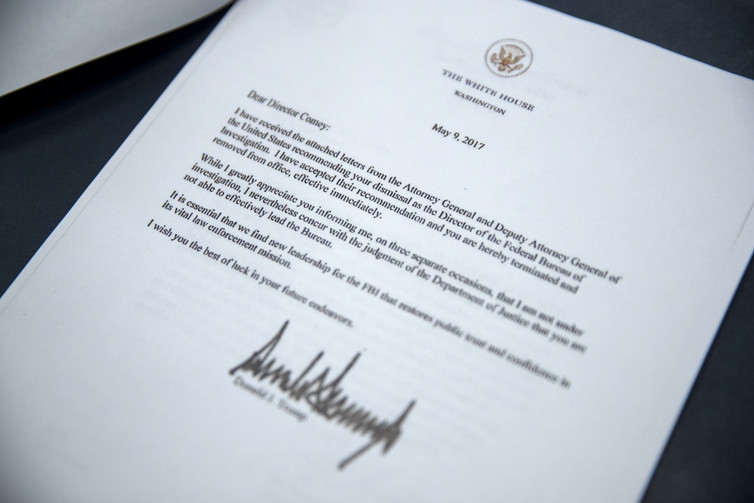 Luca Trenta of Swansea University writes for The Conversation:

Ever since Donald Trump took office amid revelations of Russian meddling in the 2016 election and his team’s connections with the Kremlin, a monumental political time-bomb has been steadily ticking. But things took an extremely ominous turn on May 9 when Trump suddenly fired the director of the FBI, James Comey.

Even by the standards of the Trump administration so far, this move is deeply shocking. For starters, the White House does not have a credible justification for firing Comey. Trump and his team claim Comey was dismissed for mishandling revelations about Hillary Clinton’s use of a private email server: the Deputy Attorney General, Rod Rosenstein, wrote a letter saying that he could not defend the “director’s handling of the conclusion of the investigation of Secretary Clinton’s emails”. White House spokesperson Kellyanne Conway took to the airwaves to state unequivocally that the firing has “nothing to do with Russia”.

This is ludicrous. Trump repeatedly praised Comey’s treatment of Clinton throughout the Presidential campaign, especially when he announced the probe had been reopened just days before the vote – an announcement that some (Clinton included) credit with assuring Trump’s victory. After taking office, the new President saw that Comey was kept on as FBI Director. The e-mail affair is now a dead scandal involving a vanquished opponent; the idea that it somehow triggered Comey’s removal is bizarre.

Perhaps indicating that even Trump knows how transparent this is, a clumsy line in the letter he sent to Comey on May 9 attempts to dismiss the all-too-clear connection between Comey’s firing and the Russia investigation: “I greatly appreciate,” the president wrote, “you informing me, on three separate occasions, that I am not under investigation.” Indeed, Trump is so keen to dispel any suspicion of collusion with Russia that he recently posted one of his tweets on the topic as his Twitter account’s header, a gesture for which he was widely mocked.

The firing also comes hot on the heels of a new round of controversies and revelations surrounding the Russia investigation. Just a week before he was fired, Comey testified to the Senate Judiciary Committee, where he confirmed that the FBI is still investigating not only Russia’s role in hacking the elections, but possible collusion between the Kremlin and members of the Trump team. He had also tried to justify his behaviour during the campaign while adding that he felt “nauseated” at the thought that he might have influenced the election result.

Trump’s behaviour since has been remarkably neurotic. On May 9, he fired off a series of inaccurate tweets meant to discredit the former acting attorney general, Sally Yates, and her testimony regarding Trump’s disgraced former National Security Advisor, Michael Flynn, who resigned in February when it transpired that he’d lied about meetings with the Russian ambassador.

Trump also tried to pin the blame for the Flynn debacle on the Obama Administration, but that backfired when former members of the Obama team revealed that Obama had personally warned Trump about Flynn in their Oval Office meeting after the election.

On top of all this is a critical problem of accountability. In March, Trump’s Attorney General, Jeff Sessions, recused himself from the Russia investigation when it emerged that during his Senate confirmation hearings, he too had failed to disclose that he had met with the Russian Ambassador. But despite the implicit acknowledgement that he is too close to the FBI’s investigation for comfort, Sessions played a prominent role in pushing for Comey’s dismissal.

Trump’s shocking decision intersects with the Russian collusion saga at several points: Russia’s meddling in the elections, collusion between the Trump team and the Kremlin, and meetings between administration officials and the Russian ambassador. And as if it wasn’t shocking enough, it’s worth remembering that firing an FBI director is almost unprecedented in US history.

The only other president to do this was Bill Clinton, who fired William Sessions in 1993 for a range of ethical and financial abuses. At the height of the Watergate scandal, Richard Nixon asked the CIA to try and obstruct the FBI’s investigation – but as the Richard Nixon Presidential Library tweeted, even he didn’t go so far as to fire the bureau’s director.

Comey was only three years into a ten-year term, whose length is designed to outlast even a two-term president and guarantee the political impartiality of the office. In spite of Trump’s suggestion that the firing was an effort to restore the bureau’s credibility, it can more properly be interpreted as a step towards politicising it – one of its agents’ greatest fears.

So has Trump at last gone too far? This question has dogged him at every turn since the very day he announced his campaign, and so far, the answer has always been a regretful “no”. There are signs that this time could be different.

As Politico reported, in what is the latest example of the President’s naivety and incompetence, Trump badly miscalculated the reaction to Comey’s firing, somehow believing that both Republicans and Democrats could agree on it. Several senators and representatives quickly criticised the president’s decision, including Republicans such as John McCain, Jeff Flake, and Richard Burr, chair of the Senate Intelligence Committee. Democrats, meanwhile, have called on the Justice Department to appoint a special prosecutor to run an independent investigation into the Trump-Russia connection.

It is so far unclear whether any such step will be taken, or whether Comey’s abrupt dismissal will seriously damage Trump’s presidency. But as veteran journalist Dan Rather pointed out, this is an extremely dark time in American history.

When he took the oath of office after Nixon’s resignation, Gerald Ford assured the American people: “Our long national nightmare is over. Our constitution works. Our great republic is a government of laws and not of men.” But now, the question of whether a president can operate above the law is at issue once again – and a new national nightmare may already be in full swing.