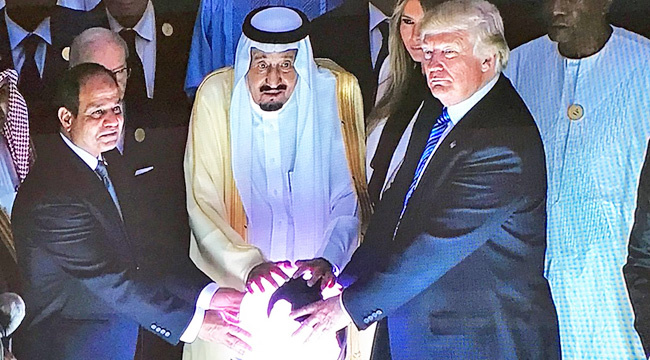 Developments on Day 121 of Trump Administration:

Trump Plays Up Anti-Iran Coalition as Saudi Gets Full Support

Donald Trump and his advisers use the second day of a trip to Saudi Arabia to bolster the announcement of $350 billion in arms sales and a declared shift in US policy with the portrayal of an anti-Iran coalition.

The centerpiece of Trump’s second day, following the declaration of the arms sales and Saudi investment in the US on Saturday, was the President’s speech calling for unity against extremism.

The speech was light on specifics for that effort. Trump avoided the pitfalls of a statement seen as alienating all Muslims — although he slipped by referring to “Islamic” rather than “Islamist” extremism and terrorism — with the sweeping invocation of “a battle between good and evil”.

Far more substantial than Trump’s references to the Islamic State and Al Qa’eda was his attention to Iran as an enemy uniting the US and Arab countries:

From Lebanon to Iraq to Yemen, Iran funds arms and trains terrorists, militias, and other extremist groups that spread destruction and chaos across the region. For decades, Iran has fueled the fires of sectarian conflict and terror. It is a government that speaks openly of mass murder, vowing the destruction of Israel, death to America, and ruin for many leaders and nations in this very room.

Trump referred to Iran’s support of the Assad regime in the Syrian conflict before turning to domestic matters in the Islamic Republic:

The Iranian regime’s longest suffering victims are its own people. Iran has a rich history and culture, but the people of Iran have endured hardship and despair under their leader’s reckless pursuit of conflict and terror. Until the Iranian regime is willing to be a partner for peace, all nations of conscience must work together to isolate it, deny it, funding for terrorism, cannot do it, and pray for the day when the Iranian people have the just and righteous government they so richly deserve.

Some analysts noted the uneasy tension between Trump’s words and Friday’s election in which almost 75% of the Iranian electorate. They also raised the tension between the Trump Administration’s statements earlier this month that human rights are no longer a priority in US foreign policy — an emphasis highlighted by the involvement not only of the Saudis but of Egyptian strongman leader Abdel Fattah el-Sisi in Sunday’s summit — with the invocation of human rights concerns over the Islamic Republic.

It was also noted that, far from being all aligned behind the US lead, some Arab States might not join in the approach. Even Oman, a Gulf Cooperation Council member alongside Saudi Arabia, is not necessarily on board — the kingdom has been keen on brokering an effort for reconciliation between the US and Iran.

The most striking juxtaposition was the sentence immediately following Trump’s criticism of Iran, which returned to what may be his primary concern:

The decisions we make will affect countless lives. King Salman, I thank you for the creation of this great moment in history and for your massive investments in America and its industries and its jobs.

A Blank Check for the Saudis

While Iran was the rhetorical center of Trump’s speech, the immediate significance is not likely to be any direct action over Tehran.

That lies instead in a US blank check to Saudi Arabia to pursue its military intervention in Yemen’s civil war, despite the killing of thousands of civilians and the escalation of humanitarian crisis. While Trump only referred to Yemen twice in the speech, one of the lines invoked the Iran pretext for action (see above) and the other was a decisive affirmation: “Saudi Arabia and a regional coalition have taken strong action against Houthi militants” — the Ansar Allah movement, which controls the capital Sana’a and much of the country — “in Yemen”.

Trump also used a passing reference to indicate full US support for Saudi ally Bahrain, despite the monarchy’s suppression of protests since 2011 with mass detentions — including of political and religious leaders — banning of political parties, and the killing of scores of demonstrators: “Our long- standing partnership with Kuwait and Bahrain continue to enhance security in the region.”

Iran continues its hegemonic activities in this region in Yemen, in Iraq, in Syria, and its support of Hezballah in Lebanon. And until Iran shows its willingness to be a good neighbor…that shows its willingness to cease its enablement of the kind of destabilizing activities that go on, their payment of foreign fighters, their payment of militias to go into other countries and destabilize those countries, then Iran will not have a place around this table that was set today.