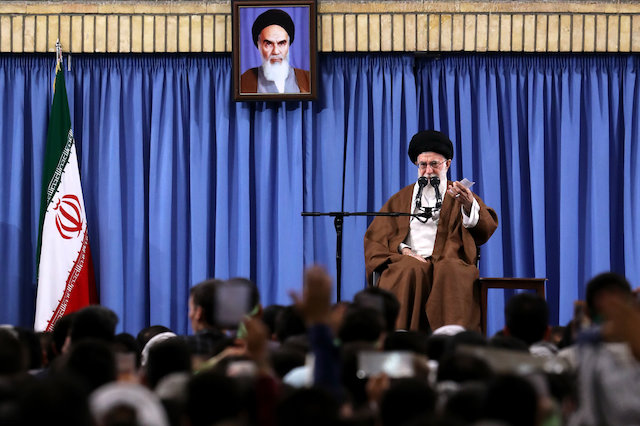 Mousavi has requested that security forces bring a mobile ballot box to his residence, where he has been under strict house arrest since February 2011.

Mehdi Karroubi, a fellow candidate in the disputed 2009 election and also under house arrest, has also endorsed Rouhani.

Crowds at Rouhani’s rally have loudly chanted the names of the two men as well as former President Mohammad Khatami, whose quotes and image are banned in Iranina media.

ORIGINAL ENTRY: In a high-profile intervention less than two days before Iran’s Presidential election, the Supreme Leader has warned of fraud in the vote.

Ayatollah Khamenei told an audience on Wednesday, “Some may seek to commit fraud in this [election]. The Iranian people have enemies. In the face of the enemy, the people’s countenance should indicate will power, conviction, self-confidence, calm and equilibrium.”

On the surface, Khamenei’s declaration is curious as it draws attention to the manipulation of the 2009 election to ensure a first-round victory for President Mahmoud Ahmadinejad, and the subsequent repression of mass protests with detentions, cutting of communications, and banning of political parties.

Two of the candidates in the 2009 ballot, Mir Hossein Mousavi and Mehdi Karroubi, have been under strict house arrest since February 2011. Iranian media are banned from quoting or showing any image of Mohammad Khatami, President from 1997 to 2005.

The Supreme Leader’s statement on Wednesday appears to be an attempt to shift the burden of any claims of fraud in this contest, given the likelihood of a close outcome between President Hassan Rouhani and the choice of Khamenei’s office, hardline cleric Ebrahim Raisi.

In 2013, Khamenei accepted a first-round victory for Rouhani, following the disqualification of the candidacy his mentor, former President Hashemi Rafsanjani. The upset came when conservatives and hardliners failed to agree on a single candidate, with three men splitting their votes.

This time, Tehran Mayor Mohammad Baqer Qalibaf — one of the 2013 candidates — withdrew to give Raisi, the choice of the Supreme Leader’s office, a clear run versus Rouhani.

Beyond his fraud warning, the Supreme Leader repeated standard lines on Wednesday about the vote demonstrating Iran’s supremacy and the regime’s legitimacy: “Regional nations have pinned their eyes, with praise and envy, on people’s turnout in the Friday election to once again witness the grandeur of the Iranian nation, the freedom in the Islamic establishment and the religious democracy.”