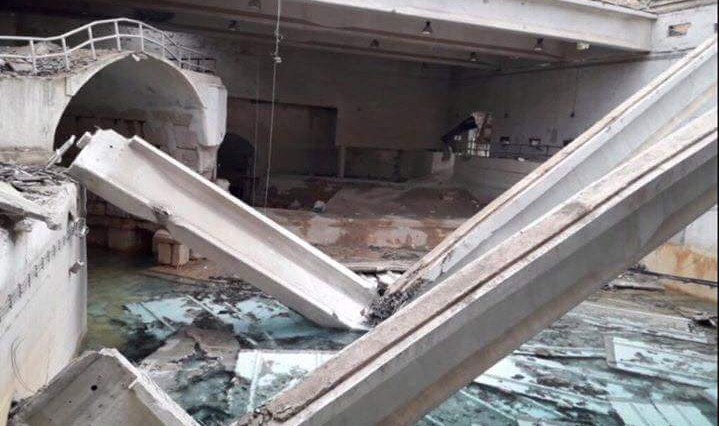 A UN report has concluded that the Assad regime bombed the main water supply to Damascus, during an offensive to occupy the Wadi Barada area northwest of Syria’s capital, in an attack constituting a “war crime”.

The latest findings of the Independent International Commission of Inquiry, given to the UN Human Rights Council, is clear: “On the second day of the offensive, 23 December, an aircraft bombed the al-Feijeh [al-Fija] spring”, which provides more than 60% of Damascus’s water.

On the same day, the Damascus Water Authority announced it had cut off water supplies because rebels had contaminated the water with diesel fuel, leaving 5.5 million people in and near the capital without regular access.

But the Commission says the regime excuse was a cover-up, and pins resonsibility squarely on the airstrikes:

[We] investigated the allegation that the water was deliberately contaminated as well as the bombing of al-Feijeh. Regarding the first, there are no reports of people suffering from symptoms of water contamination on or before 23 December nor other indications that the water was contaminated prior to this date. On the contrary, interviewees say that Wadi Barada residents used water up until the bombing of 23 December and no one experienced any symptoms of contamination. Several interviewees, including a person who went to al-Feijeh after the bombing, recalled that shrapnel damaged the storages of fuel and chlorine, which contaminated the water.

The information examined by the Commission confirms that the bombing of al-Feijeh spring was carried out by the Syrian Air Force. A review of videos of the attack, photographs of the weapons used and damage to the facility, as well as pre- and post-strike satellite imagery confirm the damage was caused by at least two airstrikes. Some entry holes in one of the facilities as well as physical damage to the structure are all consistent with high-explosive aerial bombs. Public reports that armed groups destroyed the facility with demolition charges are inconsistent with observable physical evidence. Witness testimony also supports the conclusion the attack was the result of airstrikes.

The inquiry is just as clear that the attacks were not accidental: “The al-Feijeh spring was struck multiple times by the Syrian Air Force, which indicates the spring was purposely targeted.”

And it concludes: “The attack amounts to the war crime of attacking objects indispensable for the survival of the civilian population, and further violated the principle of proportionality in attacks.”

Regime forces and Hezbollah continued their assault on the air and the ground until the end of January, when Wadi Barada finally capitulated with rebels and their families removed to northwest Syria.

The Wadi Barada attacks are not the only “war crime” documented in the report. The Commission summarizes, “Government and pro-Government forces continue to attack civilian objects including hospitals, schools and water stations.”

It specifically cites regime airstrikes on a complex of schools in Haas in Idlib Province — “amounting to war crimes” — that killed at least 35 people in late October 2016.

The UN team cites abuses by the jihadists of Jabhat Fatah al-Sham, including executions; “numerous indiscriminate attacks” by rebels; executions and destruction by the Islamic State; and displacement of civilians and forced conscription of men and boys by the Kurdish militia YPG.

However, the bulk of its report concentrates on the regime and its allies, detailing the air and ground attacks on key civilian sites and infrastructure to destroy essential services:

The number of remaining doctors, nurses, and first responders is now so grossly inadequate to meet the needs of the population that many injured civilians die due to lack of access to adequate medical care. In besieged areas, the lack of access to medical supplies, including anaesthetics, surgical equipment, and medication, makes it impossible for hospitals and clinics to provide even the bare minimum care to patients….

The Commission re-confirms the deadly regime airstrikes on a UN convoy near Aleppo on September 19, enforcing a cut-off of supplies to opposition areas of the city, and continues with more documentation — in areas such as al-Wa’er in Homs city — of “the war crimes of intentionally directing attacks against humanitarian relief objects and intentionally directing attacks against humanitarian relief personnel”.

There is also substantial detail of ongoing chlorine attacks, beyond the four already officially cited by the UN, and of the extensive bombing with cluster munitions: “These weapons were used exclusively by Government and pro-Government forces, in areas of the country subject to concentrated government offensives, causing extreme harm to civilians therein.”

Damage to the al-Fija pumping station from regime airstrikes on Wadi Barada, northwest of Damascus, December 23, 2016