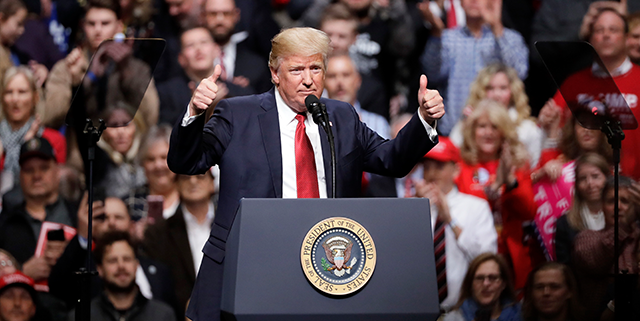 Developments on Day 55 of the Trump Administration:

A federal judge blocks implementation of Donald Trump’s revised ban on travel to the US by citizens of six mainly-Muslim countries.

Hours before the “Muslim Ban 2.0” was to come into effect, Judge Derrick Watson of the federal district court in Hawaii imposed a nationwide temporary stay.

Watson found the ban in violation of the US constitution because of religious discrimination. He cited provocative statements by Trump, throughout and after the 2016 campaign, and his advisors as “significant and unrebutted evidence of religious animus”.

The response of the Hawaii Attorney General welcoming the decision against the “over-assertion of powers”, “The President is not the king. He is not a dictator”:

The US Circuit Courts of Appeals, upholding the ban on the initial order in early February, cited the inadequacy of the Administration’s claim of national security and the violation of due process of law under the 5th Amendment. While it said these conditions meant it did not have to rule on religious discrimination, it said there were grounds to raise this challenge as well.

The Administration had hoped to deal with the possibility by removing a clause favoring admission to the US by members of “religious minorities” in the six countries. In practice, this would have given a preference to non-Muslim, including Christians, over Muslims.

The revised ban covers Syria, Libya, Yemen, Somalia, Iran, and Sudan. It blocks any processing of visa applications for 90 days and ban refugees for 120 days.

Echoing his Twitter attack on the “so-called judge” who suspended the initial executive order, Trump accused Watson of acting for political reasons. He told a rally in Tennessee of “the bad, sad news”: “We’re going to fight this terrible rule, we’re going to take this case as far as it will go, including the Supreme Court. We’re going to win.”

As the crowd loudly booed the court, Trump postured that he might “go back to the first [executive order] and go all the way”, rather than try to sustain the “watered down” revision.

The Justice Department said late Wednesday that it “strongly” disagreed with the ruling, calling it “flawed both in reasoning and in scope”: “[We will] continue to defend this executive order in the courts.”Come

TOP PHOTO: Donald Trump at a rally in Nashville, Tennessee on Wednesday night

Top GOP legislators and even his own Attorney General turn against Donald Trump’s claims that President Obama wiretapped Trump Tower in 2016.

The chairman of the House Intelligence Committee, Devin Nunes, told reporters, “I don’t think there was an actual tap of Trump Tower”, adding tat Trump’s words are taken literally, the President is “wrong”.

Two Republican senators, Charles Grassley and Lins threatened to block Trump’s nominee for Deputy Attorney General until they get clarity from the FBI about the accuracy of the President’s assertions.

And Attorney General Jeff Sessions said he gave no information to Trump that might have been the basis for the claims, put out by the President amid pressure for an enquiry into links between his associates and Russian officials.

The House Intelligence Committee had given the White House until March 13 to back up Trump’s tweets from nine days earlier, but the Justice Department asked for more time.

The Committee’s hearing is scheduled for March 20, with FBI Director James Comey scheduled to testify.

The top Democrat on the committee, Adam Schiff, said, that if no evidence backs up his claim, Trump should “explain himself”: “You can’t level an accusation of that type without retracting it or explaining just why it was done.”

Pressed by Fox News over his “proof” of wiretapping, Donald Trump gives a convoluted explanation about what he has read and seen:

I’ve been reading about things. I read in, I think it was Jan. 20th, a New York Times article where they were talking about wiretapping. There was an article. I think they used that exact term. I read other things. I watched your friend Bret Baier [on Fox News] the day previous where he was talking about certain very complex sets of things happening, and wiretapping. I said, wait a minute, there’s a lot of wiretapping being talked about. I’ve been seeing a lot of things. Now, for the most part, I’m not going to discuss it, because we have it before the committee and we will be submitting things before the committee very soon that hasn’t been submitted as of yet. But it’s potentially a very serious situation.

Trump offered no substantial evidence for the series of tweets he put out on March 4 accusing Obama.

Asked by interviewer Tucker Carlson why he investigate before tweeting — “You’re the president. You have the ability to gather all the evidence you want” — Trump put out a confused response evading the point:

I do. I do. But I think that frankly we have a lot right now. And I think if you watch—if you watched the Bret Baier and what he was saying and what he was talking about and how he mentioned the word “wiretap,” you would feel very confident that you could mention the name. He mentioned it. And other people have mentioned it. But if you take a look at some of the things written about wiretapping and eavesdropping… and don’t forget I say wiretapping, those words were in quotes. That really covers — because wiretapping is pretty old-fashioned stuff—but that really covers surveillance and many other things. And nobody ever talks about the fact that it was in quotes, but that’s a very important thing. But wire tape covers a lot of different things. I think you’re going to find some very interesting items coming to the forefront over the next two weeks.

The top-secret FISA Court approved a warrant in October for the FBI and other agencies to carry out surveillance of Russian targets, including banks, over suspicion of Moscow’s intervention in the 2016 campaign. However, it has not been established that communications were covered by the order.

Republicans Elise Stefanik of New York, Carlos Curbelo of Florida, and Ryan Costello of Pennsylvania introduced the legislation in the House of Representatives, pledging to “study and address the causes and effects of measured changes to our global and regional climates” and to seek ways to “balance human activities” that contribute.

“This issue was regrettably politicized some 20 or so years ago and we are in the process of taking some of the politics out, reducing the noise and focusing on the challenge and on the potential solutions,” Curbelo said.

A spokesman for the White House declined to comment.

The new Environmental Protection Agency administrator, Scott Pruitt, said last Thursday that he did not believe carbon dioxide was a major contributor to climate change.

“The head of the EPA’s comments were disconcerting,” Curbelo said. “What he said was akin to saying the earth is flat in 2017. We must insist on evidence-based and science-based policies.”

Attorney General Jeff Sessions relaunches the War on Drugs in a speech to law enforcement personnel in Richmond, Virginia.

After reasserting that police brutality is a myth driven by social media and that the US is riddled with crime, Sessions declared:

I realize this may be an unfashionable belief in a time of growing tolerance of drug use, but too many lives are at stake to worry about being fashionable. I reject the idea that America will be a better place if marijuana is sold in every corner store. And I am astonished to hear people suggest that we can solve our heroin crisis by legalizing marijuana — so people can trade one life-wrecking dependency for another that’s only slightly less awful. Our nation needs to say clearly once again that using drugs will destroy your life.

Sessions resurrected the much-derided slogan of the Reagan White House, promoted by the First Lady: “I think we have too much of a tolerance for drug use ─ psychologically, politically, morally. We need to say, as Nancy Reagan said, ‘Just say no.'”

Experts responded with scepticism. Daniel Raymond of the Harm Reduction Coalition assessed, “[Prevention] should not be about hammering that drugs are bad, but that some people have vulnerabilities, and need to be given skills to get through life without relying on illicit drugs.”

The Justice Department indicts two Russian operatives and two hackers over the breach of 500 million Yahoo user accounts in 2014.

The US criminal cyber-charges against Russian government officials target two members of the intelligence agency FSB and the two hackers they hired. Charges include hacking, wire fraud, trade secret theft, and economic espionage, according to officials.

The FSB, Russia’s Federal Security Service, allegedly sought the information for intelligence purposes to target journalists, dissidents, and US Government officials. However, they allowed hackers to use the e-mail cache for the officials’ and hackers’ financial gain through spamming and other operations.