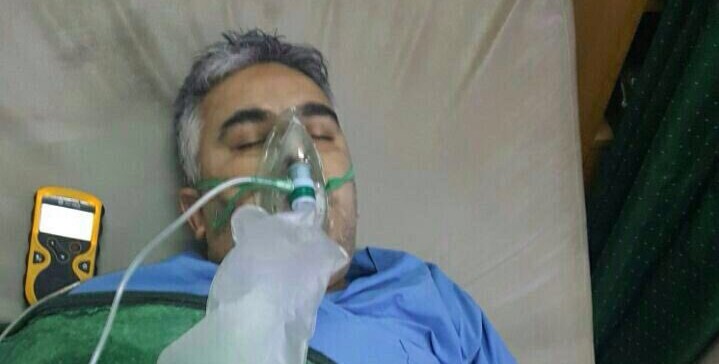 Gas from airstrike traps doctors and patients in underground hospital

A suspected chlorine gas attack on an underground hospital in rebel-held north Hama killed three people and injured dozens on Saturday as regime forces fight to drive back a rebel offensive in the area, local medical personnel tell Syria Direct.

A helicopter dropped a large yellow canister through the concrete roof of the Latamna Surgical Hospital at 1:30pm on Saturday afternoon, Abadah al-Mansour, the hospital’s spokesman told Syria Direct on Sunday.

Chlorine gas was then released, he claims, spreading throughout the rooms of the underground hospital. Without sufficient ventilation for the gas, 35 people were injured — 14 of them medical personnel—and three were reportedly killed, including a surgeon.

Aircraft monitors had informed the hospital that it could be hit, spokesman al-Mansour said, but “because the hospital is in a cave, we thought we would be safe”, and the staff and patients were not evacuated.

When, as medical sources and rescuers claim, chlorine gas was released into the entryway of the hospital, it spread throughout the underground facility. The medical staff and patients inside — 35 people in all — inhaled the gas “because there was not enough ventilation in the cave to clear it,” said hospital spokesman al-Mansour….

A report released earlier this month by the United Nations’ Independent International Commission of Inquiry on the Syrian Arab Republic covering human rights abuses by all parties from July 2016 to February 2017, found that “Government and pro-Government forces continued to target civilian areas deliberately with improvised chlorine munitions” in both aerial and ground attacks.

“The use of chlorine, which causes superfluous injury and unnecessary suffering, is inherently indiscriminate because its effects cannot be limited in time and space,” read the report, concluding that its use against civilians amounted to war crimes.

Chlorine is a choking agent. As a gas, it is heavier than air, sinking into basements and underground shelters. Mild exposure causes irritation of the respiratory tract and eyes, while the effects of severe exposure include coughing, nausea and a buildup of fluid in the lungs, potentially causing death.

The Surgeon Killed as He Operated

In Saturday afternoon’s attack on the Latamneh hospital, “most of the injured suffered from fainting, red eyes and shortness of breath”, the Hama Civil Defense reported.

Orthopedic surgeon Doctor Ali al-Darwish was operating on a patient when gas reportedly entered the hospital. “He refused to leave so he could save the patient,” said al-Mansour. “He paid the price for that with his life, and the operating technician and anesthesiologist are still in critical condition.” The patient al-Darweesh was operating on also died.

The worst-injured — Darweesh and four others in critical condition — were moved to the Bab al-Hawa Hospital, near the Turkish border with Idlib province after the attack, according to a statement posted online Saturday by the Hama Health Directorate.

Bombings have intensified in rural, rebel-held northern Hama province and neighboring Idlib in recent days, as regime forces and their allies fight back an offensive launched by rebels in the area last week.

Syrian state media agency SANA reported that warplanes had carried out “a series of raids” on convoys and positions belonging to the Islamic State and Jabhat a-Nusra (the previous name of Jabhat Fatah a-Sham) in Hama towns, including Latamneh.

The Latamna Surgical Hospital, located in a cave roughly 2km outside the town of Latamna, was set up in November 2016, one month after the town’s sole medical clinic was destroyed by a reported Russian airstrike, Syria Direct reported.

That strike, too, was part of increased airstrikes by Syrian regime forces and their allies during a rebel offensive north of Hama city.

During times of displacement and bombardment, the Latamneh hospital serves 4,000-5,000 people, Doctor Abdullah al-Darwish, the director of the Hama Health Directorate told Syria Direct on Sunday. “When things calm down, it serves 20,000 people,” he said.

The hospital is currently out of service, “not because it has been physically damaged,” said Darweesh, “but because the medical staff has been injured.” Most of those injured in the reported chlorine attack are still in hospitals in the surrounding area for observation and treatment, Darweesh said. “We don’t know when the hospital will be back up and running.”

Ali a-Darweesh, the doctor killed on Saturday, was one of two orthopedic surgeons serving northern Hama province. “Without Doctor Ali, there is now only one surgeon, and he can’t meet the need,” said the Hama Health Directorate head.

For now, the closest medical facility to Latamneh is a second underground hospital, in Kafrzita, 5km away. The Kafrzita hospital does not have surgical facilities, however, and the Latamna hospital regularly performs 30-45 operations per month, according to spokesman al-Mansour.

Orthopedic surgeon Ali al-Darwish, killed as he operated on Saturday