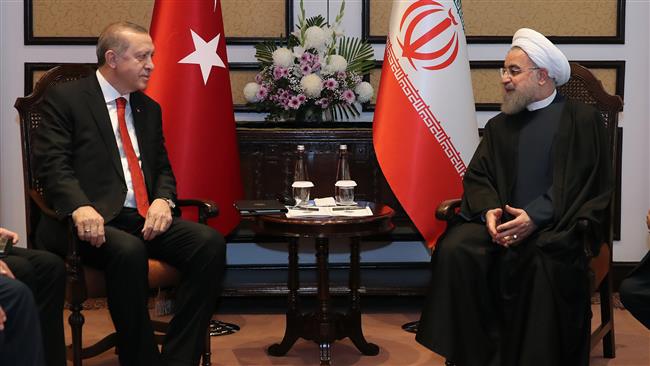 Amid tension between Iran and Turkey over the Syrian conflict, President Hassan Rouhani has met Turkish counterpart Recep Tayyip Erdoğan.

Rouhani and Erdoğan spoke on the sidelines of the Economic Cooperation Organization’s 13th plenary session in Pakistan’s capital Islamabad.

The Iranian President indirectly referred to Tehran’s concerns over a Turkish-rebel offensive that has taken much of Aleppo Province, in northern Syria, from the Islamic State. Turkey and Iran have also divided over the approach to political discussions, with Ankara backing the opposition-rebel priority of a substantive ceasefire and Tehran still working with the Assad regime to take more territory from the opposition.

He added, “We should make efforts to immediately put an end to war, bloodshed and foreign interference in the region.”

Rouhani also referred to Iran’s hope for economic recovery through a significant increase in trade and investment with Turkey, calling for cooperation in all sectors and expansion of ties in energy, transportation, and banking, including joint ventures.

Iranian State outlet Press TV limited its summary of Erdoğan’s remarks to “Tehran-Ankara cooperation is essential to the settlement of regional woes and anti-terror fight” and an embrace of “the promotion of ties with Iran”.