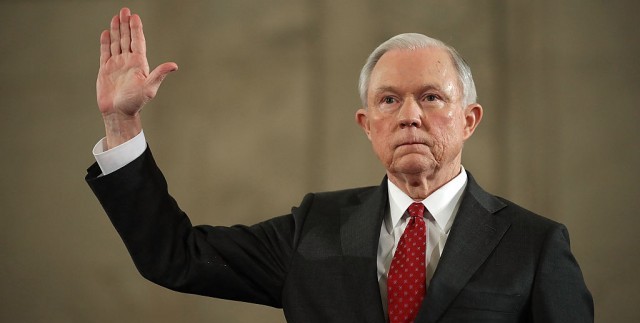 Developments on Day 41 of the Trump Administration:

See also US Podcast: Trump, Sessions, and the Russia Problem

The Justice Department reveals that Attorney General Jeff Sessions withheld information, at his confirmation hearings, about contacts with the Russian Ambassador to the US.

Sessions, who joined the Trump campaign in February 2016, met twice last year with Sergei Kislyak; however, he did not mention this to Senators when asked.

Sessions saw Kislyak in July on the sidelines of the Republican National Convention, and in September in his office when Sessions was a member of the Senate Armed Services Committee, as US intelligence officials were investigating Russian intervention in the US election to damage Donald Trump’s opponent Hillary Clinton.

At his January 10 confirmation hearing by the Senate Judiciary Committee, Sessions was asked by Senator Al Franken what he would do if he learned of any evidence that anyone affiliated with the Trump campaign communicated with the Russian Government during the campaign.

“I’m not aware of any of those activities,” he responded and added, “I have been called a surrogate at a time or two in that campaign and I did not have communications with the Russians.”

Here’s the video of Sessions denying **under oath** that he had communications with the Russians. pic.twitter.com/YFxCgqjQo6

Kislyak’s contacts with Trump associates led to the dismissal last month of National Security Advisor Michael Flynn, after only 24 days in his office. Flynn reportedly discussed US sanctions on Moscow with Kislyak during five phone calls on December 29, the same day that President Barack Obama imposed new restrictions over Moscow’s campaign interventions.

Recent disclosures have also brought out conversations between other Trump associates, including then-campaign manager Paul Manafort and advisor Carter Page, with the Russians throughout 2016.

Several of the President-elect’s nominees or senior advisers have Russian ties. Have you been in contact with anyone connected to any part of the Russian government about the 2016 election, either before or after election day?

Sessions replied with one word: “No”.

In a statement on Wednesday night, Sessions said he “never met with any Russian officials to discuss issues of the campaign. I have no idea what this allegation is about. It is false.”

Judiciary officials insisted that Sessions met with Kislyak on September 8 in his capacity as a member of the Armed Services Committee.

“There was absolutely nothing misleading about his answer,” Sessions’s spokeswoman Sarah Isgur Flores said. “He was asked during the hearing about communications between Russia and the Trump campaign — not about meetings he took as a senator and a member of the Armed Services Committee.”

Flores added that Sessions last year had more than 25 conversations with foreign ambassadors as a senior member of the committee.

The Washington Post asked all 26 members of the Armed Services Committee if any met with Kislyak in 2016. Of the 20 lawmakers who responded, every senator, including Chairman John McCain, said they did not.

“Members of the committee have not been beating a path to Kislyak’s door,” a senior committee staffer said. “There haven’t been a ton of members who are looking to meet with Kislyak for their committee duties.”

Senator Franken, who posed the initial question to Session during the confirmation hearings, said Wednesday night:

If it’s true that Attorney General Sessions met with the Russian ambassador in the midst of the campaign, then I am very troubled that his response to my questioning during his confirmation hearing was, at best, misleading.

It is now clearer than ever that the attorney general cannot, in good faith, oversee an investigation at the Department of Justice and the FBI of the Trump-Russia connection, and he must recuse himself immediately.

Senator Elizabeth Warren and several Democratic Representatives — including House Minority Leader Nancy Pelosi — said Sessions should resign. GOP Senator Lindsey Graham said that if the substance of Sessions’s conversations with the Russian Ambassador proved to be improper or suspect, he would join the call.

Warren said, amid a series of tweets:

This is not normal. This is not fake news. This is a very real & serious threat to the national security of the United States.

A Trump spokesman said the White House was “simply taking proactive steps” and called the claims of ties between Trump and Russia “false and politically motivated attacks”.

Former officials say that, in the last days of the Obama Administration, they spread information about the Russian interference in the election, including the possible contacts between Trump’s associates and the Russians.

They said they had two aims: to try and ensure that the interference does not occur in future US or European elections, and to leave a clear trail of intelligence for Government investigators.

In one instance, the State Department sent a cache of documents marked “secret” to Senator Benjamin Cardin, the top Democrat on the Foreign Relations Committee, days before Trump’s inauguration in response to a request from the legislator.

Meanwhile, the Obama Administration tightened the number of people who could assess the most sensitive intelligence, including the names of sources and the identities of foreigners who were regularly monitored, to narrow the circle — including among incoming Trump advisors — who might see the material.

Administration Accused oF Withholding Info on Connections with Putin-Linked Bank

The Trump Administration is accused of sitting on information about possible connections with a bank in Cyprus that is partly owned by a close ally of Russian President Vladimir Putin.

A group of Democratic Senators have been waiting for two weeks for new Commerce Secretary Wilbur Ross, who served as vice-chairman of the Bank of Cyprus since 2014, to answer a series of questions about possible links between the bank, Russian officials, and Donald Trump’s associates.

Senator Bill Nelson said the White House “has chosen to sit on” a written response by Ross, even though the Commerce Secretary told the senator he was eager to release his response. Nelson said Ross had “verbally reiterated” that he was not aware of any “loans or interactions” between the Bank of Cyprus and the Trump campaign or Trump Organization.

Ross has also been asked to provide more details about his relationship with previous and current Russian investors in the bank, including Viktor Vekselberg, a longtime Putin ally, and Vladimir Strzhalkovsky, the former vice-chairman of Bank of Cyprus who is also a former KGB agent.

US Allies Gave Info on Trump-Russia to American Agencies

US allies, including the British and the Dutch, have given information to Washington about meetings in European cities between Russian officials — and those close to Russian President Putin — with Donald Trump’s associates, according to three former US officials who requested anonymity in discussing classified intelligence.

Meanwhile, US intelligence agencies intercepted communications of the Russians, some of them within the Kremlin, discussing contacts with the Trump circle, according to the officials.

The White House proposes deep cuts to the Environmental Protection Agency, reducing its staff by 20% in the first year and eliminating 38 programs.

The EPA’s annual budget is to be reduced from $8.2 billion a year to $6.1 billion. Staff will be slashed from 15,000 to 12,000. Grants to states, including air and water programs, are to be cut by 30 percent. The massive Chesapeake Bay clean-up project in Maryland will receive only $5 million in the next fiscal year, down from its current $73 million.

The agency’s Office of Research and Development could lose up to 42% of its budget, and funding is eliminated altogether for the EPA contribution to the US Global Change Research Program, an initiative launched by President George H.W. Bush in 1989.

Among the 38 programs eliminated entirely are grants to clean up abandoned industrial sites, the radon program, climate change initiatives, and funding for Alaskan native villages.

The White House Counsel’s Office rejects an Office of Government Ethics recommendation that Trump counsellor Kellyanne Conway be reprimanded for endorsing the products of Trump’s daughter Ivanka in a televised interview.

The White House lawyers concluded that Conway acted “inadvertently” when she told Fox and Friends that she would buy Ivanka’s line of clothing and accessories and encouraged others to do. Deputy counsel Stefan C. Passantino wrote that Conway was speaking in a “light, offhand manner”.

Passantino said he met with Conway and advised her that her remarks “implicated the prohibition on using one’s official position to endorse any product or service”.

“Ms. Conway has acknowledged her understanding of the Standards and has reiterated her commitment to abiding by them in the future,” he added.

The row started when Donald Trump used Twitter to denounce the Seattle-based Nordstrom for dropping Ivanka’s products because of poor sales.