US Analysis: “Fire-Breathers” Get Upper Hand in White House Battle 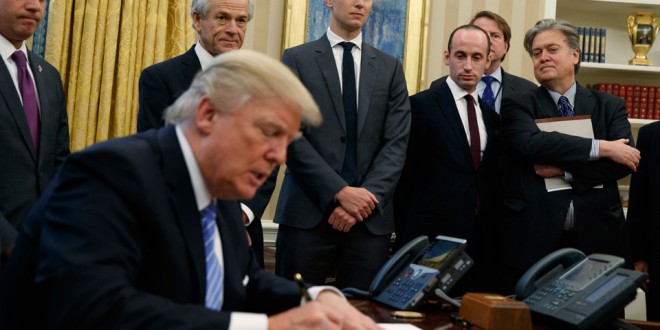 The split within Donald Trump’s White House grew on Sunday, with “fire-breathers” appearing to get upper hand over “pragmatists” in maneuvers on political talk shows.

The fire-breathers — hard-right ideologues led by chief strategist Steve Bannon — sent out policy advisor Stephen Miller to appear on four of the five leading programs. The advisor loudly defended the “Muslim Ban”, saying that court suspension was an inappropriate assertion of “judicial supremacy”, and insisted that the growing crackdown on undocumented immigrants was merely procedure.

While Miller struggled with the more challenging interviews — even getting shut down by ABC’s George Stephanopoulos after he lied about alleged voter fraud in November’s election — he received the Twitter backing of Donald Trump:

Congratulations Stephen Miller- on representing me this morning on the various Sunday morning shows. Great job!

Meanwhile, White House Chief of Staff Reince Priebus, a leading “pragmatist”, was not permitted to appear on Stephanopoulos’ show. Instead, Trump ally Christopher Ruddy, the CEO of the polemicist site Newsmax, launched an attack on Preibus on CNN’s “Reliable Sources”:

Reince just briefed me on new WH plans. Impressive! CNN today my personal view. Told him I have 'open mind' based on his results.

The shift may have been because of the intervention of Trump’s son-in-law Jared Kushner, who appears to be between the two factions:

Jared Kushner tells me COS Reince is doing "amazing job." Disagrees with me!