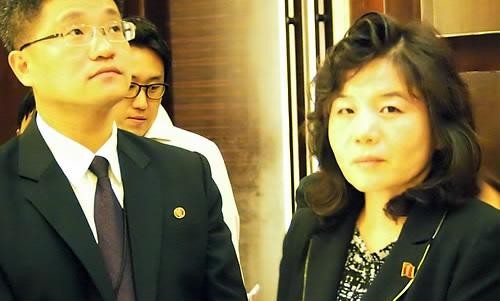 Why did Trump Administration cancel 1st back-channel talks in US since 2011 with North Koran official?

Developments on Day 37 of the Trump Administration:

The US cancels plans for back-channel talks with North Korea, with the State Department denying a visa for a top envoy from Pyongyang.

The reason for the cancellation is not clear. On February 12, North Korea test-fired a ballistic missile, and the half-brother of North Korean leader Kim Jong-un was assassinated with VX nerve agent in Malaysia the next day, with suspicion falling on North Korean officials and agents. may have played a role, the report said.

A State Department official denied that any discussions had been scheduled, “The US government had no plans to engage in Track 2 talks in New York.”

Leading GOP Representative Darrell Issa calls on Congress to “show leadership” with vigilance in its oversight of the Trump Administration.

Issa has been an enthusiastic backer of Donald Trump and once claimed the Obama Administration was “the most corrupt in history”, but he said in an interview on Saturday:

My view is: it’s extremely important that Congress point the guns at the same direction that they were pointed….

We do need a government that is accountable to us….We need to seize the opportunity and really push hard to have access so that no sacred cows are protected. For credibility, we have to hold this president to the level of transparency that the last president took every effort to thwart.

On Friday, Issa called for a special prosecutor to oversee the investigation into the Trump campaign’s contacts with Russia amid Moscow’s interference in the 2016 election.

Last week several GOP legislators, including Senator Susan Collins, said Trump’s tax returns might be subpoenaed in another line of investigation of the President.

The top Democrat on the Senate Select Committee on Intelligence says he has “grave concerns” about White House attempts to influence an investigation into links between Donald Trump’s associates and Russia.

Senator Mark Warner made the remarks after reports that the White House tried to get the FBI to issue a statement denying any ties. When the FBI refused as the investigation is ongoing, Trump’s advisors then sought officials and lawmakers on the House and Senate intelligence committees to reject the news stories of the links.

Warner said, “I have called [CIA] Director [Mike] Pompeo and Chairman [of the Intelligence Committee, Senator Richard] Burr to express my grave concerns about what this means for the independence of this investigation and a bipartisan commitment to follow the facts, and to reinforce that I will not accept any process that is undermined by political interference.”

The Senator said he would consult with the other members of the Senate intelligence panel to ensure that its investigation was free of White House intervention, “It will be up to Republican leadership to demonstrate in the days ahead that they are capable of pursuing this investigation.”

Perez won 235 to 200 in the second round. He then proposed Ellison as deputy chair, a motion which passed unopposed.

Perez is the first Latino to lead the DNC. Ellison, the first Muslim member of Congress, is a longtime activist for grassroots causes.

Both men used their remarks after the vote and messages on social media to emphasize unity in the challenge to Donald Trump and defense of the social programs promoted during the Obama Administration.

Perez also had a pointed exchange with Trump:

Congratulations to Thomas Perez, who has just been named Chairman of the DNC. I could not be happier for him, or for the Republican Party!

Call me Tom. And don't get too happy. @keithellison and I, and Democrats united across the country, will be your worst nightmare. https://t.co/fu7WvLofrD

Donald Trump continues his offensive against the media by announcing that he will not attend this year’s White House Correspondents’ Dinner.

Trump made the announcement in a measured tweet that was markedly different from his recent attacks on the “fake media”:

I will not be attending the White House Correspondents' Association Dinner this year. Please wish everyone well and have a great evening!

The annual black-tie dinner raises money for journalism scholarships and is usually attended by the president, journalists, celebrities, and Washington insiders. The last President to miss the event was Ronald Reagan in 1981 when he was recovering from an assassination attempt, although he still delivered remarks by phone.

Several news organizations had already withdrawn from the April 29 event in protest of Trump’s treatment of the media. Vanity Fair and Bloomberg have cancelled their after-party, and The New Yorker has will not hold its pre-party the day before.

At an all-hands meeting of the NSC, McMaster said jihadist terrorists are not true to their professed religion and that the use of “radical Islamic terrorism” hinders the US in working with allies.

Instead, organizations such as the Islamic State should be viewed as a perversion of Islam, and thus un-Islamic, McMaster said.

The general, who served for years in Iraq, is known for his view that American forces and officials must establish co-operation with local people and groups, and that the “radical Islamic” label hinders that effort.

A White House official said there is a “genuine difference of opinion” between Trump and McMaster on the use of the term, but that it is not a “major difference”.

Last Friday, Trump told the Conservative Political Action Conference as he promised a revised “Muslim Ban” suspending the visas of citizens from seven mainly-Muslim countries, “Let me state this as clearly as I can, we are going to keep radical Islamic terrorists the hell out of our country.

A source said McMaster signaled that Russia was an adversary, not a friend, in contrast to both Trump’s affinity for Russian leader Vladimir Putin. He also struck a different tone from Bannon, who has expressed a desire to distance the US from the European Union, by defending the US-European alliance.

The meeting was “very good for morale” among the career NSC staff, the source said.

Bannon has tried to assert his influence over the NSC. He was behind an executive order which said that he and other White House staff, including counsellor Kellyanne Conway and chief of staff Reince Priebus, could attend all meetings. And the chief strategist ensured he was made a full member of the Principals Committee, which carries out the day-to-day implementation of NSC guidelines.

EPA Head to Roll Back Obama Regulations In “Aggressive Way”

The new head of the Environmental Protection Agency, Scott Pruitt, says he will begin rolling back Obama-era regulations in an “aggressive way” as soon as next week.

“I think there are some regulations that in the near-term need to be rolled back in a very aggressive way. And I think maybe next week you may be hearing about some of those,” Pruitt told the Conservative Political Action Conference.

Pruitt, who pursued numerous lawsuits against the EPA as Oklahoma Attorney General, say he believes many American want to see the agency eliminated completely, claiming that its focus on combating climate change costs jobs and prevents economic growth.

“I think its justified,” he said. “I think people across this country look at the EPA much like they look at the IRS. I hope to be able to change that.”

Fox News is criticized for using a “Sweden expert” who has no connection with the Swedish defense and security services and who has been convicted of a violent offence in the US.

Trying to defend Donald Trump’s distorted claims of rising violence in Sweden — drawn from a Fox interview with a documentary maker whose work is suspect — Fox turned to Hans Bildt as a ”Swedish defense and national security advisor”.

See also This is Donald Trump’s “Terrorist Attack” in Sweden

But Marie Pisäter at the Swedish Defense Ministry says that no one called Nils Bildt works there. ”We have no spokesman by that name”, she said. The Foreign Office said, ”We do not know who he is.”

Bildt, who runs several companies in the US, was convicted of assaulting a law enforcement office and obstruction of justice in 2014 and was given a one-year prison sentence.

He said, “I appeared on Bill O’Reilly’s show on Fox News. Te title was chosen by Fox News’s editor – I had no personal control over what title they chose. I am an independent analyst based in the USA.”

Bildt’s appearance from 2:58 on the O’Reilly program:

In yet another example of Donald Trump taking distorted “news” from Fox, the President uses Twitter to highlight — and take credit for — an out-of-context claim about a reduction in national debt.

The media has not reported that the National Debt in my first month went down by $12 billion vs a $200 billion increase in Obama first mo.

But Trump did not recognize issues with that simple portrayal of the figures. The fall in debt was because of adjustments around the sales of Government securities, rather than a reduction in the base figure.

He did not appear to understand that any significant shift in the debt is likely due to the policies of his predecessor, given that the new Administration has not begun to implement its policies.

Nor did Trump acknowledge the sharp difference in the situation between January 2009, when President Obama inherited one of the worst financial crises in modern American history, and that of January 2017, with an economy in a much-improved position.

The original Herman Cain statement on Fox and Friends: