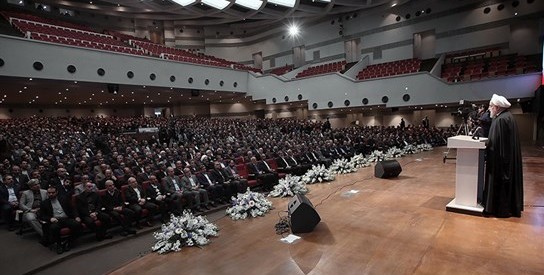 Iran’s President Hassan Rouhani effectively launched his pursuit of re-election on Saturday, with an address claiming the accomplishment of the 2015 nuclear deal and economic recovery after its implementation.

Rouhani’s speech, to officials for the May 2017 ballot, was mainly devoted to exaltation of the process, “I hope we witness a competitive, glorious election in 2017 that leaves our enemies astonished and our friends around the world hopeful”. He added:

We must encourage people to work more and contribute to the country’s prosperity by voting….We must not let elections become polarized because polarized elections bring trouble for our country….

Elections give people hope anew and the entire elections process is a gift from God that must be safeguarded. Everybody must go to the ballot box and know that their presence is very significant for the destiny and greatness of Iran.

But the President also used the occasion to set out his achievements, beginning with the effect of the nuclear agreement with the 5+1 Powers (US, UK, China, Russia, Germany, and France): “The government has fulfilled its promises to people. We had promised a 5% growth rate but currently, our country’s economic growth is more than 6% and this is very significant.”

Rouhani did not note difficulties which put a question mark over that claim of 6% growth. Amid continued US financial restrictions and internal tensions, Iran is still struggling to confirm trade and investment in key sectors, including the oil and gas industry.

Instead, the President spoke about the continued effort to purchase 180 passenger jets from Airbus and Boeing to hail his calm approach and push back critics: “The art of diplomacy is to untie tangled knots easily. Sometimes one must clench their fist and chant but some believe that they should just clench fists and shout.”

Hardliners and conservatives have yet to agree a primary challenger to Rouhani, who won a surprise victory in 2013 after three hardline and conservative candidates weakened each other and split votes.