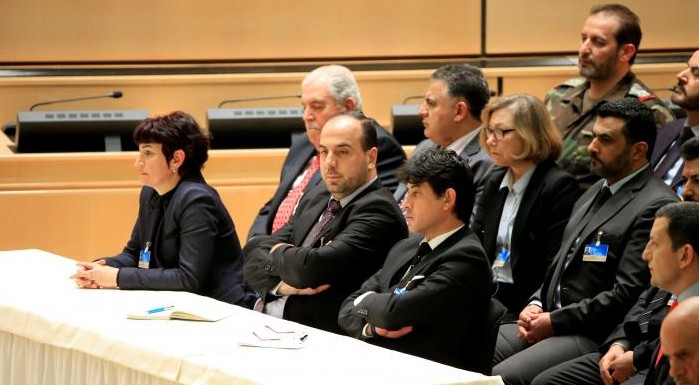 A Journey Through Assad’s Syria

UPDATE 1745 GMT: The head of the regime delegation, Bashar al-Ja’afari, said that they are considering a paper from Staffan de Mistura, following today’s meeting with the UN envoy.

“In our next meeting…we shall inform him accordingly of our position on the contents of this paper,” Ja’afari said.

Political talks to end Syria’s six-year conflict resumed on Thursday, with the regime and opposition-rebel bloc facing each other in Geneva.

I ask you to work together. I know it’s not going to be easy to end this horrible conflict and lay the foundation for a country at peace with itself, sovereign and unified….

The Syrian people desperately all want an end to this conflict and you all know it. You are the first ones to tell us it. They are waiting for a relief from their own suffering and dream of a new road out of this nightmare to a new and normal future in dignity.

Mistura will hold meetings with the delegations on Friday to establish a procedure for indirect discussions.

Russia and Turkey brokered a renewal of talks in late January in the Kazakhstan capital. Expectations are still low: the Assad regime is demanding an end to the process for a transitional governing authority — the centerpiece of international proposals since 2012 — in which the President might have to leave power. The opposition-rebel bloc is again calling for a substantive ceasefire, release of detainees amid the killing of thousands in regime prisons since 2011, and an end to sieges — but with little belief that the regime will consider any of those demands.

However, the opposition-rebel group has bent to Russian pressure to include some politicians preferred by Moscow, and De Mistura maintained on Thursday that the nominal ceasefire brokered by Russia and Turkey offered a possibility: “The effort has jump-started the process…to see if there is a political road forward and we don’t want to miss this opportunity.”

However, neither side applauded De Mistura’s statement. As he embraced opposition-regime representatives, the regime delegation walked out of the room.

Tension also immediately arose over a transitional process. The lead negotiator for the opposition, Nasr al-Hariri, said, “If Staffan is serious he has to stick to the first subject in the agenda which is a political transition that is acceptable to the Syrian people.”

But Russia’s envoy in Geneva, Alexei Borodavkin, said demands from for Assad to step down are “absurd”.

The opposition’s Hariri also declared, “Iran is the main obstacle to any kind of political deal,” blamed Tehran for ongoing pro-Assad attacks violating the nominal ceasefire.

On Thursday, pro-Assad warplanes carried out attacks from Aleppo and Hama Provinces in the northwest to the Damascus suburbs and Daraa Province in the south.

Hezbollah and the Syrian military have been trying to take more territory southwest of Aleppo city, reoccupied by the pro-Assad forces in December, while fighting has been ongoing in Daraa city since last week when rebels attacked to pre-empt an expected pro-Assad offensive.

A group of Syrian women read out a joint statement called for the release of prisoners, “We, as families, demand the immediate release of our relatives who have been unlawfully detained.”

Framed photos of dozens of prisoners, covered with long-stemmed red roses, were placed on the ground, as the vigil heard stories of those imprisoned or missing.

“I am married, but to a detainee. He was arrested two weeks before our wedding on March 15, 2012,” human rights lawyer Noura Ghazi said. “Ten months later he was transferred to Adra prison in Damascus. We got married in prison.”

She visited her husband, Bassel Khartabil, every week for almost three years before he was transferred to an “unknown place” in October 2015. “There was a rumour he was sentenced to death. I know nothing,” she said.

Fadwa Mahmoud, a 63-year-old dissident and former prisoner, sought refuge in Berlin in 2015 three years after searching for her husband Abdulaziz Al Khayer, head of the banned Communist Action Party, and her son Maher Tahan, both arrested near Damascus airport.

“I cry every day,” she said. “I want to keep working on this file as long as there is one detainee in Syria. It is not only about my son and husband.”

UN envoy De Mistura stood with some of the women, saying:

They were sending to me, and through me to everyone, the message that while we are going to talk about the future of Syria we should not forget those who are still either detained or abducted, or missing.

There are thousands and thousands of mothers, wives, daughters who are hoping that at least this aspect will be one of the benefits of any negotiation…You can be sure that we will be constantly raising detainees, abducted and missing people.

Iraq PM: We Carried Out 1st Airstrike Inside Syria

We are determined to chase terrorism that tries to kill our sons and citizens wherever it is found, so we gave orders to the air force command to strike Islamic State positions in [the border towns of] Hosaiba and Albukamal inside Syrian territory as they were responsible for recent bombings in Baghdad.

The heroes of the sky executed the operation and responded to the terrorists with amazing success.

The Syrian Foreign Ministry says the raid was carried out “in total coordination” with the Assad regime.

Claimed footage of the airstrikes:

The Local Coordination Committees has confirmed that 129 rebels have been killed by a jihadist faction moving towards the Islamic State.

Civil defense teams said they retrieved the bodies of the executed and have handed them over to relatives for burial.

The men were slain by the group Liwa al-Aqsa amid fighting in northwest Syria. They were found near a reservoir south of Khan Sheikhoun in Idlib Province.

More than 70 of the victims were from the faction Jaish al-Nasr.

Rebels say they have completed the takeover of the Liwa al-Aqsa positions in southern Idlib and northern Hama Provinces, with the jihadists withdrawing to the city of Raqqa, ISIS’s central position in northern Syria.

The widow of one of the victims says, “From the beginning of the revolution, I knew that his death was a possibility. But I didn’t expect him to die in this horrific way.”

A day after losing the city of al-Bab in Aleppo Province, the Islamic State has detonated a car bomb in the nearby village of Sousiyan, causing scores of casualties.

The Local Coordination Committees said 53 people have been killed.

A Turkish-rebel offensive took over al-Bab, ISIS’s last major position in the province, after a 2 1/2-month assault. 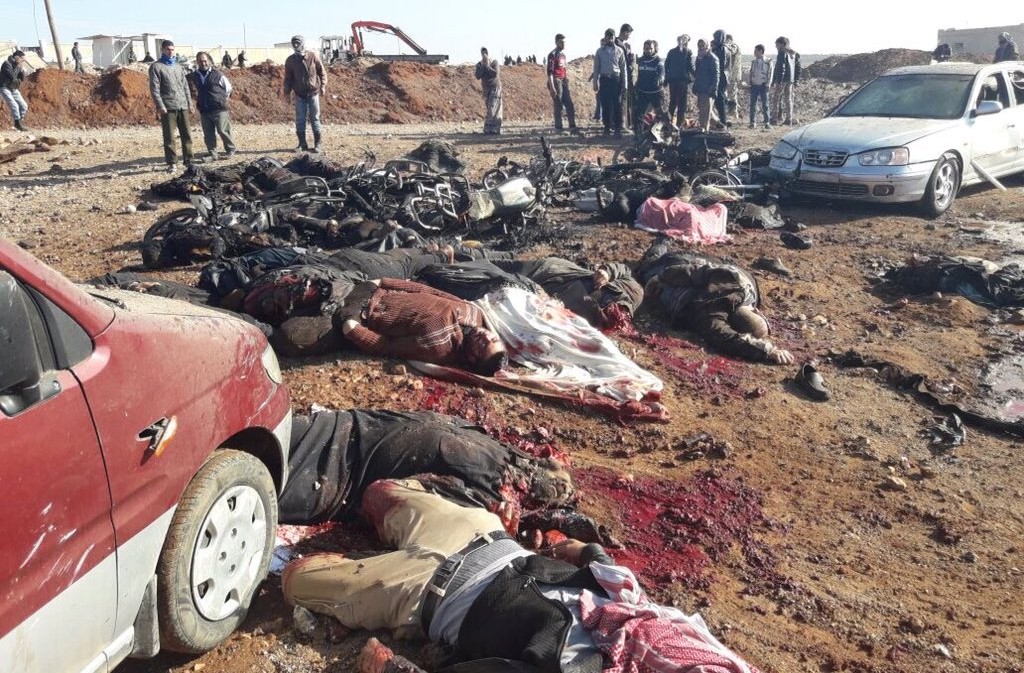 #ISIL car bomb Targeted #FSA and Civilians in the village of Sousyan in the northwest of #Albab result of many casualties pic.twitter.com/nlPMb0BGt4

The slain troops were conducting road checks at the entrance of the city. Other soldiers were wounded.

Meanwhile, celebrations in al-Bab after the departure of ISIS:

Celebrations inside Al-Bab after expulsion of #ISIS by #EuphratesShield forces. pic.twitter.com/THM598vgyi