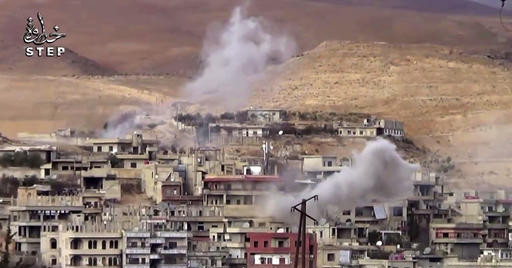 Investigation: Who Cut Off Damascus’s Water?
Analysis: How Turkey Joined Russia — and Left Saudi Arabia Behind

The assault is reportedly with tank shelling and Grad rockets on the Dumayr and Nasiriyah bases.

The rebels say they are attacking in support for the Wadi Barada area, northwest of Damascus — despite the supposed ceasefire, Assad and Hezbollah forces are continuing their three-week attempt to overrun the territory.

UPDATE 1800 GMT: Turkish Foreign Minister Mevlüt Çavuşoğlu has criticized ceasefire violations by the Assad regime’s army and militias, warning that these could derail political talks scheduled for next month in Kazakhstan.

“If we cannot stop the violations, the Astana process could fail,” Çavuşoğlu told the Turkish State outlet Anadolu Agency, blaming Hezbollah as well as Assad forces.

He called on Iran to exert pressure on Shia militias — which have been organized by Iran since 2012 to fight for the regime — and President Assad to stop the violations.

Çavuşoğlu added that the opposition had so far responded to the truce.

He said that Turkey and Russia have been working on a document of punitive enforcement measures against those who violate the ceasefire deal.

UPDATE 1430 GMT: Another White Helmets rescuer has been killed, bringing the total slain by Russia-regime attacks since 2013 to 156:

Mourning the loss of our hero "Mohammad Sawan". He was killed in a double tap bombardment in #WadiBarada.pic.twitter.com/4CPH3KOkqg pic.twitter.com/DkwGvELUQK

The Revolutionary Forces of Syria Media Office site says the specialized officers were invited by community leaders to check the damage from pro-Assad attacks and arrange repair and maintenance. However, the men were halted at a checkpoint.

UPDATE 0945 GMT: A pro-opposition website reports an advance for the regime and Hezbollah forces attacking the Wadi Barada pocket, northwest of Damascus:

ORIGINAL ENTRY: Syria’s national ceasefire is close to collapse, only six days after it began, amid an assault by pro-Assad forces on an area northwest of Damascus.

Local sources said on Tuesday that the ceasefire is effectively “toast” because rebels have lost patience with the ongoing attacks, notably on the Wadi Barada pocket.

The Syrian military, militias, and Hezbollah have not halted ground and air assaults despite the truce, hoping to overrun the pocket of 10 villages and about 100,000 people. The area is significant because of the al-Fija springs, which provide 60% of Damascus’s water.

Near the start of the three-week offensive, regime airstrikes damaged the pumping facility for the springs. More than 4 million people in the capital have been affected and have no more than two hours of water per day.

The rebel faction Jaish al-Islam said on Tuesday that it will move fighters from the east Qalamoun region, where they have been facing ISIS-affiliated units, near Wadi al-Barada. Although the group did not specify its operations, it could attack the regime and Hezbollah forces who have surrounded the pocket, as well as an Iranian headquarters in the area.

Regime forces have also continued their attempt to seize more territory in the East Ghouta area, northeast of Damascus, and shelling and airstrikes have been reported in Idlib, southern Aleppo, and northern Hama Province since the ceasefire, brokered by Russia and Turkey, began last Thursday.

The local sources reported a rebel response on Tuesday with rebel shelling in northern Hama Province. In Damascus Province, they fired at a military base in protest over the regime attempt to overrun Wadi Barada, and they also shelled the regime enclave of al-Fu’ah in Idlib Province.

One source summarized, “These actions are just a symbol, a last signal to considering the deal as null and void.”

Rebel factions said on Monday that, because of the pro-Assad attacks, they are freezing any discussion of involvement in political talks in Kazakhstan next month with the Assad regime. The negotiations are the next stage of the Russian-Turkish plan for a resolution which leaves both Moscow and Ankara with influence in Syria, whatever the outcome for President Assad and the opposition.

The Assad regime continues to justify its attack with the pretext that the strikes are on the jihadists of Jabhat Fatah al-Sham (formerly Jabhat al-Nusra), whom Damascus and Russia say is excluded from the ceasefire — even though there is no established JFS presence in Wadi Barada.

On Tuesday, the pro-regime Al-Watan also proclaimed attacks by the Syrian Army and militias in northern Homs Province against “al-Nusra and its allies”.

In the case of East Ghouta, pro-Assad outlets have not even bothered with the JFS/Nusra pretext: they have acknowledged that the attacks are on Jaish al-Islam, which is covered by the ceasefire.

Turkey Warns US Over Supposed Lack of Support

The Turkish Defense Minister, Fikri Işık, has implicitly warned that Ankara will block US use of one of the largest military airbases in the world if Washington does not support Turkish-rebel operations within Syria.

Işık said, in response to a question on Thursday:

“I hope that all coalition forces, especially the US, will provide the air support and other support that Turkey needs in the Euphrates [Shield] operation, and the necessary steps will not be delayed further.”

The Defense Minister then said the lack of US involvement made the Turkish Government “question” the American position at Incirlik.

Turkey intervened on August 24 with airstrikes, armored vehicles, and troops alongside a rebel offensive against the Islamic State in northern Syria. After taking much of ISIS’s territory, the offensive has struggled in the past month in its attempt to capture al-Bab, the Islamic State’s main position in Aleppo Province.

A spokesman for the US coalition said on Wednesday that “there have been discussions at the diplomatic level about the way ahead” for cooperation on the al-Bab offensive.

Air Force Colonel John Dorrian said in Washington, “We do expect that there will be some ongoing support to Turkish operations in and around al-Bab.”