PHOTO: A young victim of the regime chlorine on Sarmin in Idlib Province, March 2015

For the first time, international investigators have listed President Assad and his brother Maher, the former commander of an elite Army unit, as suspects in the use of chemical weapons.

The joint inquiry for the UN and the Organisation for the Prohibition of Chemical Weapons has named 15 people in connection with a series of chlorine bomb attacks in northwest Syria in 2014-15.

The list was based on a combination of UN-OPCW evidence compiled and information from Western and regional intelligence agencies, according to a source.

The UN/OPCW team concluded in August that the regime was responsible for two chlorine attacks in Idlib Province — on Talmenes on April 21, 2014 and Sarmin on March 16, 2015.

Virginia Gamba, the head of the Joint Investigative Mechanism, asserted that, despite the list, “There are no…identification of individuals being considered at this time,” she told Reuters by email.

The first section of the list, “Inner Circle President”, lists six people including President Assad and his brother, who commanded the elite 4th Armoured Division at the time of the attacks, the Defense Minister, and the head of military intelligence.

The second section names the air force chief and four commanders of air force divisions, including the heads of the units named by the inquiry over the chlorine attacks.

The third part of the list names two colonels and two major-generals.

Previous UN enquiries, including the investigation of the Assad regime’s 2013 sarin attack that killed more than 1,400 people near Damascus, have been restricted by Security Council mandates from assigning responsibility.

Claims are circulating that three Russian soldiers have been killed in Aleppo city.

Claims include the deaths of the Russian troops in a clash with Iraqi militia over goods looted from homes or a rebel “sleeper cell” carrying out assassinations.

The Russian Defense Ministry has offered no commment.

Continuing to break the nominal ceasefire, regime warplanes carried out more airstrikes on Idlib Province, killing at least eight people on Friday and nine on Saturday.

Today’s fatalities were in the town of Ma’arat Misrin, where 15 people were wounded: 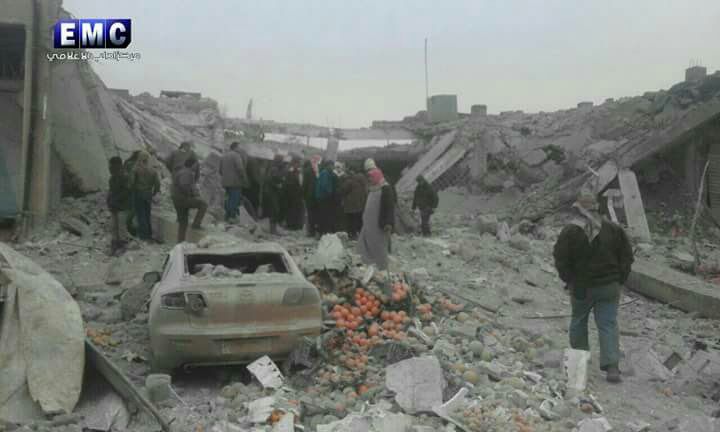 Activists say 20 civil defense workers were injured in Ariha in a “double tap” bombing, as they tried to help the victims of an initial attack.

White Helmets rescuers dig out a child from the rubble in Ma’arat Misrin: