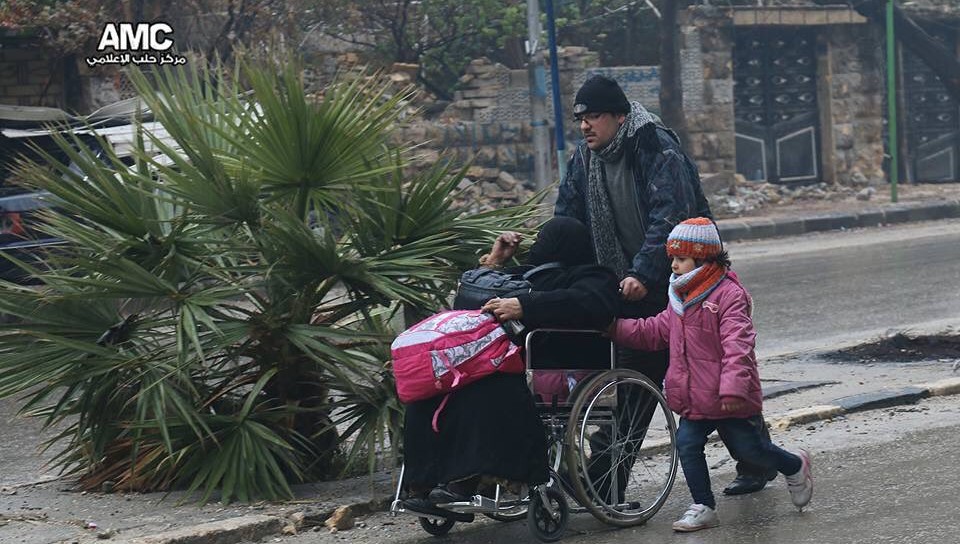 Analysis: After Aleppo — It’s Up to Russia and Iran
Podcast: Aleppo, War Crimes, and What Happens Now

UPDATE 1700 GMT: Amid evidence that Iran overruled Russia’s brokering of an Aleppo ceasefire, a representative of a rebel faction claims he witnessed an argument between Iranians and Russians over the evacuation of wounded people on Tuesday night:

After we took injured to the evacuation location, Iranians came and wanted to interfere. Russians objected. They started arguing. Shelling resumed.

UPDATE 1355 GMT: Rejecting Russia’s claims about the breaking of the Aleppo ceasefire, Turkish President Recep Tayyip Erdoğan has criticized the violations by pro-Assad and Iranian-backed militias.

The shelling quickly undid the work of Turkey and Russia in arranging a truce and possible removal of rebels and civilians from eastern Aleppo city.

Erdoğan said, “I will have a phone conversation with Russian President Vladimir Putin over the situation this evening.”

UPDATE 1320 GMT: The rebel faction Faylaq al-Sham has acknowledged the loss of an entire battalion as it fought advancing pro-Assad forces in the al-Kalasah section of Aleppo.

A statement said the battalion refused to withdraw until all civilians were able to leave, while inflicting dozens of casualties on the pro-Assad troops and militia.

UPDATE 1100 GMT: Opposition activists and outlets claim that Russian warplanes are now attacking the Ansari and Salaheddin neighborhoods in Aleppo.

UPDATE 0955 GMT: Multiple witnesses and pro-opposition sources are reporting that pro-Assad forces have broken the ceasefire, only hours after it began.

Shelling is reported on the remaining opposition districts in eastern Aleppo city, such as Mash’had, Sukkari, Salaheddin, and Ansari.

Local sources have said Russian claims of the evacuation of 6,000 are false: “Iranians and various militias shelled the places where people were waiting for the green buses.”

However, Russian Foreign Minister Sergei Lavrov maintained the propaganda line this morning, “I hope that the situation in Aleppo will be resolved in two to three days. [Russia] has created humanitarian corridors that have been and are being used by tens of thousands of civilians.”

The Russian military put out the further declaration that “militant groups…resumed combat operations Wednesday morning, but their attack was beaten back”.

It insisted that rebels had shelled the green buses and then effectively endorse the pro-Assad shelling, “The Syrian army went ahead with the operation to retake eastern Aleppo’s quarters from the militants.”

It seems likely that ceasefire and evacuation deal has broken down due to regime/Iranian disapproval. Situation very bleak. #Aleppo

Pounding the east of #Aleppo with dozens of artillery bombs since one hour until now we have counted more than 100 bombs.#Stand4Aleppo pic.twitter.com/1EG68WdpQV

Salah Ashkar from eastern Aleppo, “A missile just fell on the roof of my building. Now the people who were waiting the buses have to run back for their lives and again find shelter.”

A missile just fell on the roof of my building
Now the people who were waiting the buses have to run back for their lives again find shelter pic.twitter.com/WGGfc1BEdX

ORIGINAL ENTRY: A ceasefire has taken effect in Syria’s largest city Aleppo, but removals of rebels and civilians have been delayed.

With pro-Assad forces on the point of victory after months of siege and bombardment, Tuesday’s agreement was brokered by Russia and Turkey. It allows rebels, their families, and other civilians to leave the city. The displaced will go to opposition-controlled Idlib Province: from there, they can move to other locations, including the effective Turkish “safe zone” in northern Aleppo Province.

1.We are going to leave Aleppo city, but the whole world should know that our leaving its self is a crime.#Aleppo #Syria #StandWithAleppo

Turkey’s military said rebels, who may take light weapons out of Aleppo city, can join the Turkish-rebel offensive against the Islamic State. The offensive, launched on August 24, is now trying to capture ISIS’s main position in Aleppo Province, the town of al-Bab.

The first removals were expected at 5 a.m. local time. However, opposition officials said pro-Assad militia had blocked the operations. Another local pro-opposition source said Iran, the essential backer alongside Russia of the Assad regime, had objected.

Breaking: Many artillery attacks are taking place against the east of #Aleppo#Stand4Aleppo

Breaking: Video document one of 10 shells falling on the besieged neighborhoods of #Aleppo, in attempt from #Iranian to broke the Truce pic.twitter.com/9o5IicMimJ

Before Tuesday’s agreement — negotiated without either the Assad regime or the US — tens of thousands of civilians were at risk from the capture of the opposition’s final few neighborhoods. Scores of people were reportedly executed by the pro-Assad forces. Men of fighting age were seized, with the choice of conscription into the Syrian military or detention and torture, according to witnesses.

We just reached Dr. Hamza al-Khatib in Eastern Aleppo, who told us of widespread executions. https://t.co/MisQ3DboCq

Residents sent final messages, some revising them after news of the ceasefire spread. One said, “I thought we’ll die here! Cant believe we’ve a chance 2 live.”

Syrian State TV’s image of green buses lined up for the removal of the rebels and civilians: 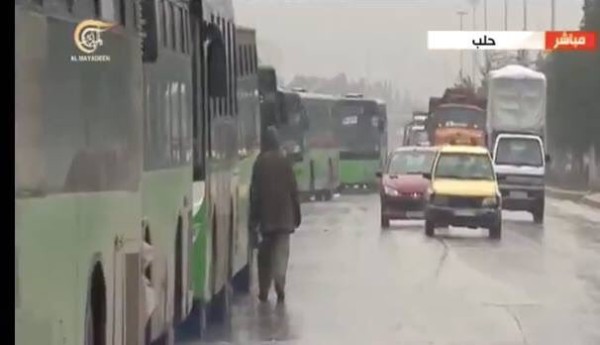 Before regime and Iranian-backed militias broke the ceasefire, Russian Foreign Minister Sergei Lavrov spoke by phone with Turkey’s Foreign Minister Mevlut Çavuşoğlu. Lavrov explained, “It is easier for Moscow to reach deal with Turkey — on Aleppo — than with the US.”

It is our wish that no one points the finger at someone else in such a humanitarian situation. There is an agreement here, and this must also be implemented.

People have been slaughtered, children have been killed. So now, everyone is responsible here.

Assad Blames West for His Defeat in Palmyra

Finally responding to last week’s recapture of the historic city of Palmyra by the Islamic State from the regime, President Assad has blamed the West.

In an interview with Russia’s RT, Assad did not explain why his military succumbed so quickly to the lightning ISIS offensive. Instead, he asserted:

If [Palmyra] was captured by the government, they would be worrying about the heritage. If we liberate Aleppo from the terrorists, the western officials and the mainstream media, they are going to be worrying about the civilians. They do not worry when the opposite happens, when the terrorists are killing those civilians or attacking Palmyra and destroying the human heritage, not only the Syrian heritage.

Despite Tuesday’s announcement of a ceasefire in Aleppo, brokered by Russia and Turkey, Assad continued to denounce the Western calls for a truce: