UPDATE 1745 GMT: A ceasefire and removal of people has been agreed for eastern Aleppo city, officials and activists from all sides say.

The ceasefire began at 6 p.m. local time and departures will start at 5 a.m. Wednesday.

The deal was brokered between the Turkish intelligence services and the Russian military, with Ankara and Moscow serving as guarantors.

Rebel leaders said many civilians and fighters would leave for opposition-held Idlib Province, and Turkey moving some to northern Aleppo Province.

"I thought we'll die here! Cant believe we've a chance 2 live" Zien told me, how sad 2b happy coz u r being deported out of ur home! #Aleppo

Russia’s Ambassador to the UN, Vitaly Churkin, referred to an agreement only for the withdrawal of rebels and not for civilians.

However, the Turkish “senior government official” setting out the terms said both rebels and civilians would be given safe passage to Idlib Province. From there, they would be “free to relocate”.

He said there are no limits on fighters joining the Turkish-rebel offensive against the Islamic State in Aleppo Province.

News of the deal came after the UN said it had reports of 82 people, including 11 women and 13 children, executed by pro-Assad forces in the past 24 hours.

Civilians leave the Bustan al-Qasr district before the ceasefire announcement: 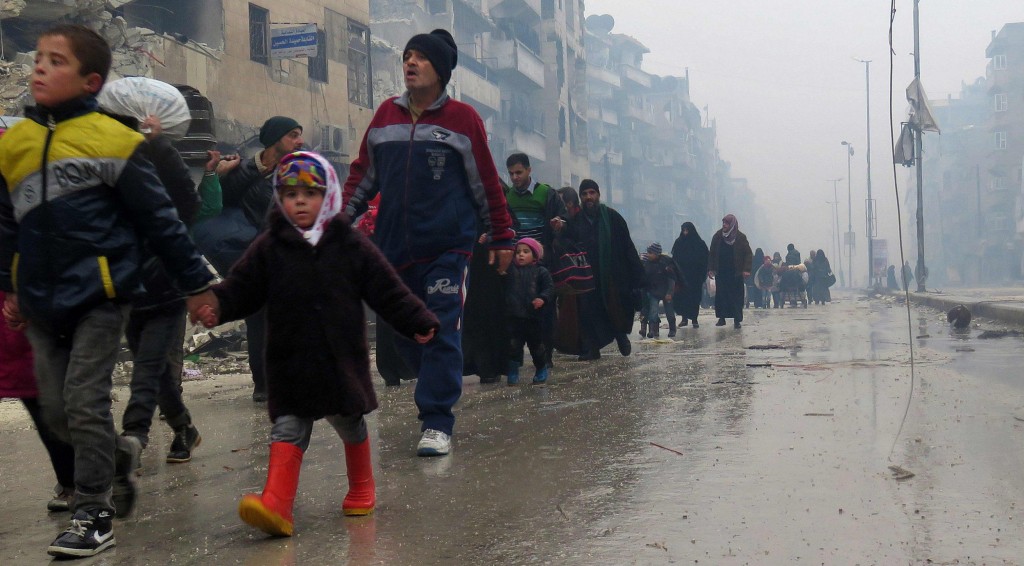 Earlier today: families in #Aleppo moving from one besieged district to another as army closes in, hoping to stay alive just a bit longer. pic.twitter.com/N41xhZmoSD

The joint statement calls “on all parties to ensure the safe passage of media workers and show respect for the work and the physical integrity of media personnel, who are ensuring that the outside world and citizens within Syria are being kept informed of developments and can make informed decisions on the basis of this”.

It notes that journalists, like civilians, are protected under the Geneva Convention.

UPDATE 1355 GMT: Citizen journalist Waad al-Kataeb tells her story from east Aleppo — “I don’t want to go out from the city. It’s my Aleppo. It’s my lovely city”:

The message from Syrian camerawoman @waadalkateab, who documented the plight of people trapped in rebel-held East Aleppo for @Channel4News pic.twitter.com/lyYPApbDLF

UPDATE 0845 GMT: The White Helmets rescuers say they are no longer able to count the dead and wounded in eastern Aleppo city.

Yesterday the civil defense organization reported mass casualties, with more than 90 bodies of people presumed to be still alive under debris. Volunteers said they could hear the voices of children trapped in rubble of their homes.

A volunteer said Monday night that men, women, and children were huddling and crying in the streets and at the gates of empty buildings in the remaining opposition neighborhoods. Bombing has destroyed medical facilities, ambulances, and fuel supplies.

UPDATE 0830 GMT: A message this morning from eastern Aleppo city:

I still here, facing the genocide with my special friends without any comments from the world i hope i could broadcast our live death to you https://t.co/9U7kJHMNrl

The final call from teacher Abdulkafi al-Hamdo, “Assad militias maybe 300 meters away. No place to go….I hope you can do something for the people. For my daughter. For the other children.”:

ORIGINAL ENTRY: Pro-Assad forces are on the verge of capturing all opposition areas of Syria’s largest city Aleppo, with fears of death or detention for tens of thousands of civilians.

Advancing foreign fighters and elements of the Syrian army and paramilitaries, supported by intense shelling and bombing, took all but a few remaining districts on Monday. Areas occupied included Bustan al-Qasr, near the border with regime-held districts. Rebels were holding out in Sukkari, Mash’had, and Zebdia.

Claims circulated of the execution of scores of civilians in districts such as Firdous, Kalaseh, and Bustan al-Qasr. Residents and activists spoke of widespread detention of fighting-age men, possibly conscripting them into the depleted Syrian military.

A regime officer addresses a group of men taken by the pro-Assad forces: 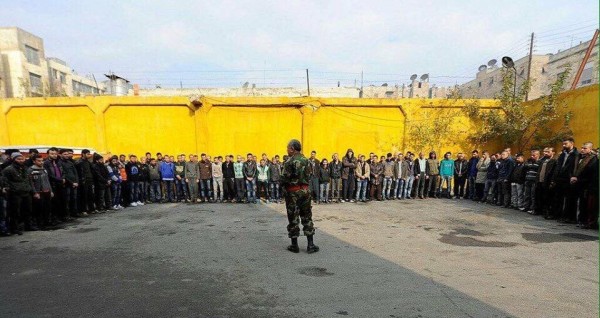 As the day unfolded, residents sent messages of despair or resignation, such as “Lina Shamy’s” filmed statement: “To everyone who can hear me, we are here exposed to a genocide”. Fatemah al-Abed, whose first-hand reports of life in east Aleppo under siege and bombardment have caught international attention, wrote: “Final message – people are dying since last night. I am very surprised I am tweeting right now & still alive.” A message on behalf of her 7-year-old daughter Bana said simply, “My dad is injured now. I am crying.”

U guess it's goodbye..
Thanks all who stand for us and pay for us.
But it's almost over and they are just hours away of killing us

It is the doomsday inside Aleppo. Bombs bombs are over the head of civilians. people are running running but don't know where to go.

Local in Aleppo says spent evening dragging bodies from frontline near his home, left others on street. "At this point I'm hoping for death"

A man carries a child with an IV drip as they move deeper into remaining opposition areas: 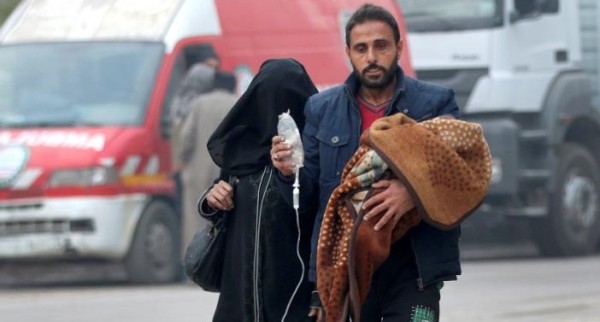 Meanwhile, in regime-held districts, there were scenes of people celebrating alongside regime troops:

A humanitarian worker in Aleppo says celebratory gunfire is non-stop. Rebel pockets may be holding out, but for regime it's as good as over.

Russia Covers Strategy With Blame of US

As the Syrian military said final victory was hours away, Russia effectively confirming that it had promoted US-Russian discussions for a removal of rebels and civilians to buy time for military operations. Foreign Minister Sergei Lavrov said a news conference in Belgrade:

From December 3 when we met John Kerry in Rome they supported such a concept [of total rebel withdrawal and even gave us their approval on paper.

But after three days they revoked that agreement and returned to their old, dead-end position which comprises this: before the agreement on corridors there has to be a truce…As I understand, this would just mean the rebels would get a break.

Last weekend a US-Russian proposal was presented to the opposition for the withdrawal of rebels, families, and civilians; however, as pro-Assad forces renewed their advance, Moscow denied any agreement with Washington.

Lavrov covered his statement with the proclamation of a possible US conspiracy: he said the Islamic State’s capture of Palmyra from the Assad regime may have been “orchestrated, coordinated” by the US-led coalition “to give a break to those bandits that are in eastern Aleppo”.

US State Department spokesman John Kirby responded, "We’re deeply frustrated but not surprised by this lack of Russian and regime commitment to what should be a humane solution."

UN officials, blocked for months by Russia and the Assad regime from providing any assistance to east Aleppo, expressed concerns. Secretary-General Ban Ki-Moon said he was worried by reports about "atrocities", while humanitarian advisor Jan Egeland tweeted:

The Gov'ts of Syria & Russia are accountable for any and all atrocities that the victorious militias in Aleppo are now committing!

"Better to Die Than Live in Humiliation"

A nurse, whose father and brother were killed by sheling, said:

I cannot leave because I’m medical staff which means a terrorist in the eyes of the regime.

I cannot forgive. It is better that God takes my life than to live in humiliation under those who murdered most of my family and my neighbours, and destroyed my country and street and robbed my home.

American journalist Bilal Abdul Kareem, who has covered the Syrian conflict on the frontline for years, sent a final message:

Perhaps my final message from E. Aleppo. Regime forces are closing in and bunker busters are raining down. pic.twitter.com/XgK0DSa08x

Aerial view of the Sheikh Sa'eed district, captured on Monday by pro-Assad forces:

Turkey's military officials say the Turkish-rebel offensive to capture al-Bab, the last major position of the Islamic State in Aleppo Province, has been slowed by almost 1,000 ditches and many improvised explosives and mines.

Last weekend the rebels and Turkey, which intervened on August 24 with airstrikes, tanks, and special forces, announced the operation to move into al-Bab. The offensive has surrounded the town, but has not been able to enter.

A military official said some ditches are almost two meters (6 1/2 feet) to block tanks and other armored vehicles, while bomb-laden vehicles and suicide teams are in the town.

To clear space for the al-Bab operation --- reaching the town before Assad regime forces or Kurdish militias --- Turkey has apparently acceded to the Russian-regime conquest of opposition areas in Aleppo city.