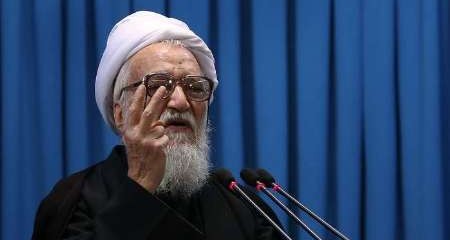 The Tehran Friday Prayer, delivered with guidance from the Supreme Leader’s office, has again warned Iran’s Rouhani Government not to work with the US.

The Prayer leader, Ayatollah Mohammad Ali Movahedi Kermani, said, “We hope there are no officials who are still attached to America.”

Movahedi Kermani reinforced his warning with praise of Foreign Minister Mohammad Javad Zarif for “formally apologizing for being deceived” by US Secretary of State John Kerry during the negotiations over the July 2015 nuclear deal and its implementation.

He emphasized that the Supreme Leader had always said that he was “not optimistic about the talks”, but that officials failed to take the remarks seriously.

Ayatollah Khamenei accepted the talks after he was told by President Rouhani in September 2013 that Iran faced economic crisis in September 2013 if there was no deal. However, he has already limited the acceptance with his derision of a “dishonest” US and his command that any links are limited to the nuclear agreement.

Other key elements in the regime, notably the Revolutionary Guards and hardline MPs, have denounced the Government for being too weak in its approach to Washington.

The criticism has been buttressed recently by the US Congress’s 10-year extension of the 1996 Iran Sanctions Act. President Obama has prevented any substantive impact by continuing waivers of the sanctions; however, President-elect Donald Trump could lift the waivers when he takes office on January 20.

A Joint Commission created to resolve disputes over implementation is scheduled to meet on January 10 to discuss Iran’s objections to the extension of the ISA.

Movahedi Kermani linked his challenge to the Government with an exaltation of mass counter-protests on December 30, 2009, organized by the regime to blunt the demonstrations over the disputed 2009 Presidential election.

“On that day, the Iranian nation gave a humiliating lesson to global arrogance and its puppets,” he said.

President Rouhani has spoken for the fourth time this month with Russian counterpart Vladimir Putin about the Syrian crisis.

One detail of interest is that Rouhani and Putin said the continuing battle against “terrorist groups” includes the jihadists of Jabhat Fatah al-Sham as well as the Islamic State.

The version of Thursday’s agreement signed by Syrian rebels excludes only ISIS from the ceasefire; however, claims are circulating that the version accepted by the Assad regime also excluded JFS. That pretext is being used to cover attacks by pro-Assad forces breaking the ceasefire.

Syria Daily, Jan 31: Ceasefire Holds in Some Areas, But Regime Attacks in Others

The discussion came as Tehran hosted Syrian Foreign Minister Walid al-Moallem, including a meeting with Rouhani.

The head of Iran’s National Security Council, Ali Shamkhani, declared in a session with al-Moallem and the head of the Assad regime’s Security Bureau, Ali Mamlouk, that Damascus had won a “terrorist world war against the country”.