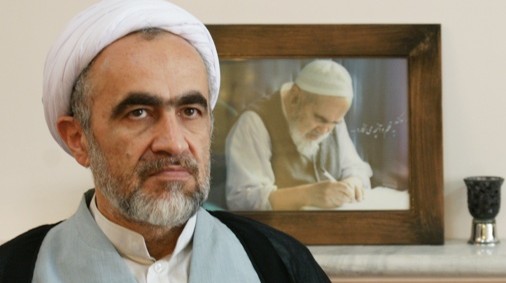 The son of the late Grand Ayatollah Hossein Ali Montazeri, who was once a possible Supreme Leader of Iran, has been given a 21-year prison sentence.

Ahmad Montazeri was convicted of “acting against national security and…publishing audio files with classified secrets”. He has also been stripped of his clerical status for three years.

Montazeri has 20 days to appeal. If the sentence is confirmed, the prison term will be reduced to six years because his brother was killed fighting for the Islamic Republic.

In August, Montazeri posted a recording of his father condemning Iran’s execution of about 5,000 political prisoners in 1988. The Grand Ayatollah, a favorite to succeed Ayatollah Khomeini as Supreme Leader, told senior officials of the “death commission” of his concerns over the executions.

Grand Ayatollah Montazeri, who wrote several letters to Khomeini outlining his criticism, fell out of favor with the Supreme Leader before Khomeini’s death in 1989. Montazeri was subsequently placed under house arrest until his death in December 2009.

Iranian officials insisted that the 1988 recording as “incomplete and full of errors and distortions”.

Confirming the sentence in an interview with Radio Zamaneh, Montazeri said:

The court that tried my case was headed by an honorable judge who talked to me and I think he was satisfied with the answers I gave. I was hoping for an acquittal. It took them a while to deliver judgment and I thought maybe this is a sign of acquittal. But I guess the sentence was dictated from elsewhere because the judge with the qualities I know of him could have not ruled for this sentence.

He said the sentence will not silence him or stop him from releasing other documents:

If I feel I am obligated to deliver on my duty, I will do so. It depends on the time and the conditions in the future. Maybe if I am in prison the files will be published sooner than intended.

Rouhani and Putin Discuss Oil Ahead oF Crucial OPEC Meeting

A Kremlin statement said the two men agreed to coordinate the steps on the global hydrocarbons markets, including in the framework of the energy dialogue between Russia and the Organization of the Petroleum Exporting Countries”.

OPEC ministers gather on Wednesday in Vienna to discuss a proposal for a freeze on output amid continued low global prices, compared to the peak of 2014.

Iran wants an exemption from any cuts to continue its post-sanctions recovery of porduction and exports. Tehran’s regional rival Saudi Arabia has reportedly offered a compromise for Iranian output of just under 4 million barrels per day, close to the Iranian level before stringent US and European sanctions took effect in 2012. However, Tehran has yet to agree the proposal and has continued to lobby OPEC officials, with Secretary General Mohammad Barkindo visiting Tehran earlier this month.

The Kremlin also said the two men “agreed to continue close cooperation aimed at ensuring long-term normalization of the situation in Syria”.

It did not refer to the Iranian role in a pro-Assad offensive, enabled by Russian airstrikes and a Russian-regime siege, to overrun eastern Aleppo city.

See Syria Daily, November 29: The Devastation of East Aleppo and Its People