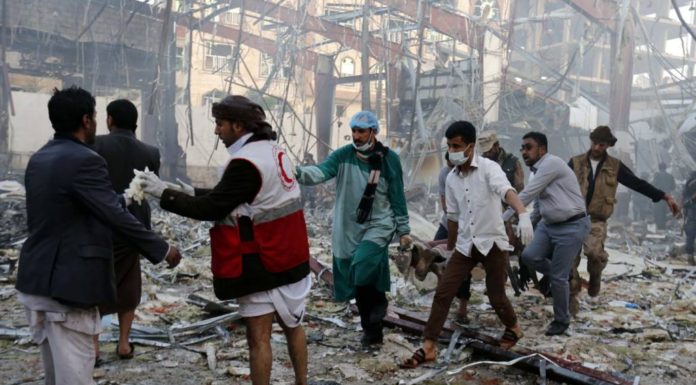 More than 140 people have been killed and hundreds wounded in Yemen by a Saudi airstrike on a funeral reception.

The fighter jets destroyed a crowded hall in the Yemeni capital Sana’a, in one of the deadliest incidents since a Saudi-led coalition intervened in Yemen’s civil war in March 2015.

The Health Ministry broadcast pleas on radio stations to summon off-duty doctors, as families pleaded with passers-by outside hospitals to donate blood.

Tamim al-Shami, a spokesman for the Health Ministry, said at least 104 people had been killed and 550 wounded. He added that the death toll was likely to rise, with rescuers working to remove bodies from the rubble.

“There are charred bodies, and some were cut to shreds and couldn’t be identified,” Shami said.

The UN’s humanitarian coordinator, Jamie McGoldrick, put the toll at 145 dead and 525 wounded.

A witness, Mohammad al-Hadrami, said two almost-simultaneous strikes hit the hall, followed by a third about a minute later. Rescue workers gathered outside the hall, but were hesitant to enter for fear of another strike.

“Some of the people who were carried out of the hall were headless,” said Hadrami.

Another witness reported four strikes spread over a slightly longer period of time.

General Ahmed al-Asiri, a spokesman for the Saudi-led coalition, sent a text message that officials were aware of the reports but claimed it was possible that there were other causes for the blasts.

Asiri later supported an assertion by Saudi outlet Al Arabiya that the coalition had not carried out any strikes near the hall.

But the UN’s McGoldrick blamed airstrikes and said he was “shocked and outraged”.

Saudi Arabia, accompanied by other Gulf States, sent in warplanes and troops soon after the Ansar al-Allah (Houthi) faction took control of Sana’a, forcing the government of President Abdurahman Mansour Hadi, to flee to the southern port city of Aden.

The US has provided military assistance to the Saudis, while Iran has supported Ansar al-Allah with political — and, according to critics, significant military — backing. Ansar al-Allah is also allied with forces of the former President Ali Abdullah Saleh, who was forced by mass protests to step down in 2012 after 33 years in power.

Last week, Ansar al-Allah and its allies hit a support vessel operated by the UAE, destroying it, in the Bab al-Mandeb Strait.

More than 9,000 people have been killed in the conflict. Many others are at risk of malnutrition and starvation, amid food shortages exacerbated by a Saudi-led naval blockade.