Iraq Analysis: A Beginner’s Guide to the Battle for Mosul 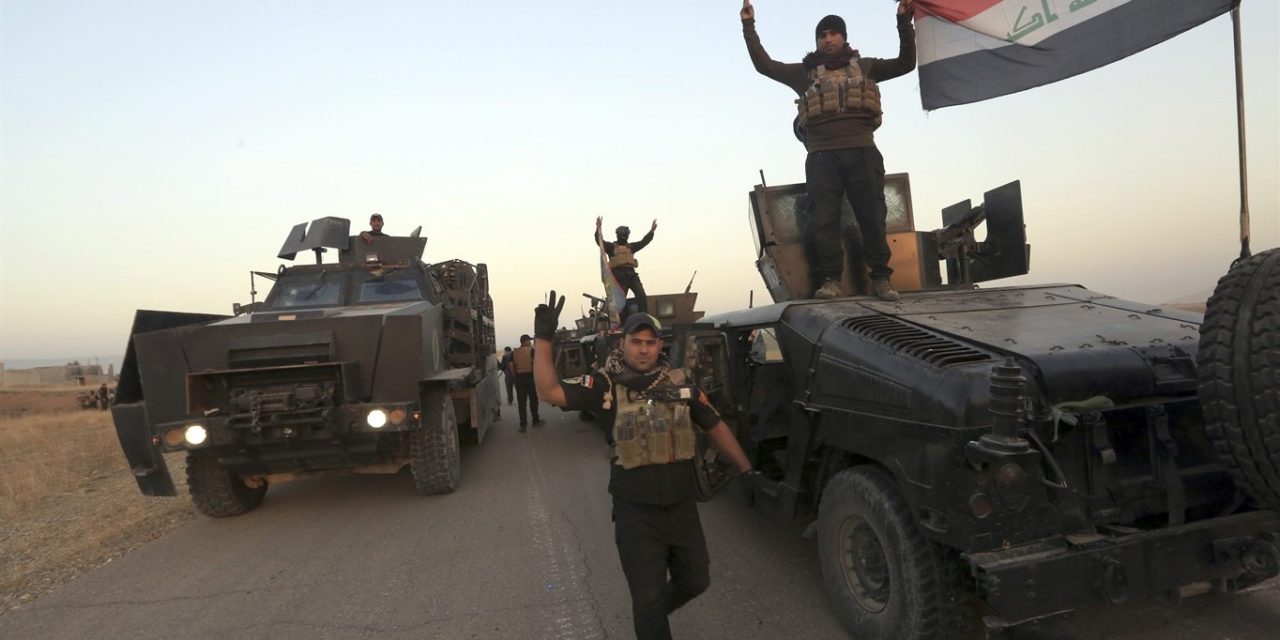 PHOTO: Troops of Iraq’s elite counter-terrorism forces pose for a photo as they advance towards Mosul on Thursday (Khalid Mohammed/AP)

About 30,000 Iraqi troops and Kurdish peshmerga, supported by US-led airstrikes and US, British, and French special forces, are involved in the operations. Mostly-Shia paramilitary units (PMUs) are present, but are saying their role is to cut off ISIS support lines rather than engage in fighting.

Declaring that only the Iraqi army and federal police will enter the city, al-Abadi reassured people in and near Mosul that the goal of the military campaign is to liberate the city and that sectarian conflict will not be fostered. He urged civilians — estimated at 600,000 to 1.5 million inside Mosul — to stay home until exit routes are provided.

The Prime Minister reiterated his message during the week. On Wednesday, he joined Iraqi forces in Nineveh Province. Speaking via video conference, he told an international meeting in Paris on Thursday that the army is now well-trained and is representative of all Iraqis, and that human rights violations will not be allowed.

The convergence of Iraqi forces and Kurdish Peshmerga demonstrate an agreement by the factions to defeat ISIS. Military gains and advances were soon announced in the initial days of the campaign, with more than a dozen villages retaken. However, the offensive is now facing Islamic State resistance, as well as suicide bombings and a counter-attack on the city of Kirkuk to the east.

The campaign to recapture Mosul from the Islamic State is significant on many levels.

This is ISIS’s last urban stronghold, where a caliphate was declared by leader Abu Bakr al-Baghdadi two years ago, trying to establish rule over a diverse population of Sunni Arabs, Kurds, Christians, Turkmen, and other religious minorities.

Mosul is the birthplace of ancient civilizations, with a cultural heritage that is representative of the identity of the Iraqi state and people. To erase this identity, the Islamic State launched a campaign to destroy the city’s cultural and historic artefacts, monuments, and historic locations in 2015.

A Breakthrough for National Consensus?

The military operations and its initial gains have been widely hailed by Iraqi people. Local campaigns on social media include trending hashtags such as رسائل الى الموصل (Messages to Mosul), الموصل_تعاد (Mosul is being retaken), and الموصل_عراقيه (Mosul is Iraqi). Videos of Christians celebrating the recapture of their villages have been widely disseminated.

Realizing the importance of these campaigns, Prime Minister al-Abadi has begun using these hastags in his official tweets. The campaigns are also highlighting the necessity of reliability in the dissemination of news, avoiding misinformation.

These efforts reflect a wide consensus — perhaps the first in more than a decade — not just on the goal to defeat IS, but also to counter sectarianism. There is also a shared belief that a military victory is achievable, albeit at a later stage.

Still, the challenges of reclaiming Iraq’s second city are great. ISIS’s tactics of mined roads, suicide bombing, and IEDs are already confronting the offensive. The protection of civilians, by allowing them secret roads to escape the Islamic State, will aggravate the humanitarian situation. ISIS is already ordering civilians to hand over their simcards to the nearest checkpoint within 24 hours, or else have their mobile devices confiscated and face arrest. The numbers of displaced may exceed the capacities of international organizations to shelter them.

Immediate obstacles are even compounded by post-liberation challenges. Issues such as holding the ground, imposing security, establishing legitimacy, setting local administration, and returning displaced people are critical. Coexistence among the diverse communities, reconstruction of infrastructure, and rebuilding of trust between the Baghdad Government and the local people must be established. Outside forces will have competing interests.

Defeating the Islamic State does not put an end to terrorism. Iraqis will need to push towards real reform in their political, judiciary, military, economic, and educational institutions. Rule of law and the reopening of files on fraud and graft, bringing the corrupt to justice, should be a priority.

While a current national consensus on liberation of Mosul is a real opportunity for a united Iraqi future, political divisions and the security threat must now be confronted and not just cited as problems. Otherwise, the opportunity to rebuild trust among Iraqis, and to overcome sectarianism, will be lost.