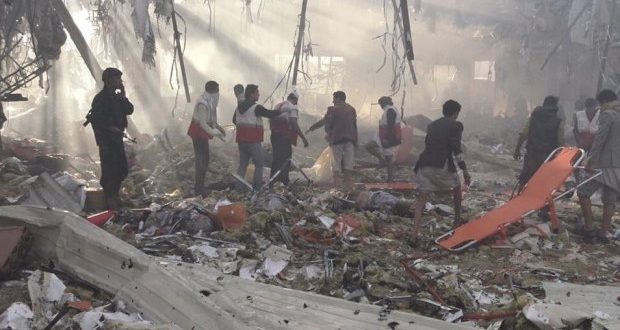 PHOTO: Rescuers at the scene of a deadly Saudi airstrike in the Yemeni capital Sana’a on Saturday

UPDATE 1730 GMT: The deputy head of Iran’s armed forces has piled on the criticism of Riyadh.

“Saudi Arabia has by no means the capability to confront Iran and [in fact] not only Saudi Arabia, but its allies are also incapable of confrontation with the Islamic Republic of Iran,” General Massoud Jazayeri, said in response to a question by reporters.

He added that Saudi Arabia “counts for nothing [against Iran] and is no match for the Islamic Republic of Iran in the region to aspire entering military scenes”.

The general dismissed last week’s Saudi military exercises in the Persian Gulf, the Sea of Oman, and the Strait of Hormuz: “Saudi maneuvers were a routine parade and a mediocre and low-level mission according to our observations.”

Jazayeri also joined the Revolutionary Guards’ denunciation of the US, “The Americans also lack such a capability and will.”

The commander of the Islamic Revolution Guards Corps’ Aerospace Force repeated the line of a US-Israeli plot behind the attack.

General Amir Ali Hajizadeh said, “Evidence shows that this crime has been committed under the operational control of the US and the Zionist regime.”

Meeting Russia’s special envoy on Syria, the Secretary of the Supreme National Security Council, Ali Shamkhani, jabbed, “Washington’s silence over the crimes of al-Salman [the Saudi royal family] and massacre of the defenseless people of Yemen that are done by means of modern US weaponry is another clear indication of the US negligence towards human rights and lives.”

ORIGINAL ENTRY: Iran has pressed the US and Saudi Arabia over airstrikes in Yemen that killed more than 140 people on Saturday.

The Islamic Revolutionary Guards Corps led the campaign yesterday, claiming that the attack on a funeral reception in the capital Sana’a was a “plot” and “Zionist crime” by Israel as the US and the Saudis.

In a further escalation of the hostile rhetoric between Tehran and Riyadh, accompanying a deterioration since Saudi Arabia broke relations with Iran in January, the Guards proclaimed:

There is no doubt that the crime of the bombardment of a funeral ceremony in Sana’a, which was attended by more than 1,500 defenseless Arab Muslims, has pushed the Saudi regime another big step closer to collapse.

The statement expressed confidence that the Yemeni people — led by the Ansar al-Allah (Houthi) movement which took power in Sana’a in early 2015 and has been fighting the Hadi Government — will take revenge and give an “unforgettable lesson” to the Saudi monarcy and its “malicious allies”.

Turning to Washington, the IRGC claimed, “The US policies in the Muslim world are turning into a factor for the genocide and gradual massacre of Muslims.”

It added that the US has committed crimes in countries such as Afghanistan, Iraq, Lebanon, Palestine, Syria, Libya, and Bahrain in recent years. The IRGC even linked Washington to the September 2015 crush near the Saudi holy city of Mecca which killed thousands of pilgrims, including 464 Iranians.

Iran has given political support — and, according to its critics, military backing — to the Houthis in their fight against the Government, now based in the port city of Aden in southern Yemen.

Saudi Arabia led a coalition intervening in the civil war in March 2015, with both aerial and ground operations.

More than 9,000 civilians have reportedly died in the fighting, many of them killed by bombing, and much of the country is at risk of malnutrition and famine with the Saudi-led coalition enforcing a naval blockade.

Journalist Ehsan Mazandarani has been released from prison temporarily for medical treatment.

Mazandarani’s lawyer, Hooshang Pourbabaei, said his client is going to hospital because of the effects of a hunger strike.

The managing editor of the newspaper Farhikhtegan, Mazandarani was arrested with three other journalists in November 2015 amid a crackdown by the Revolutionary Guards. They were accused of being part of an “infiltration network” conspiring with “hostile” Western governments.

All four were found guilty in April of “conspiracy against national security.” Mazandarani was given a seven-year prison sentence, but the Revolutionary Court of Appeals reduced his sentence to two years.

Mazandarani went on a hunger strike earlier this year and suffered a heart attack on June 20. 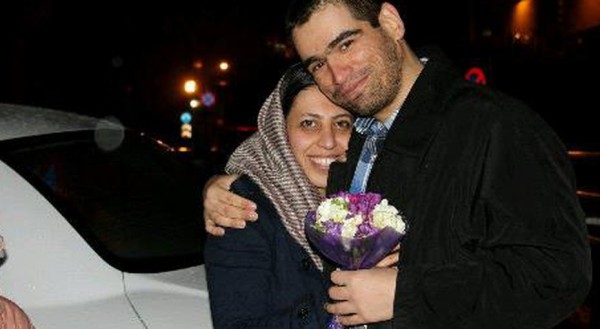