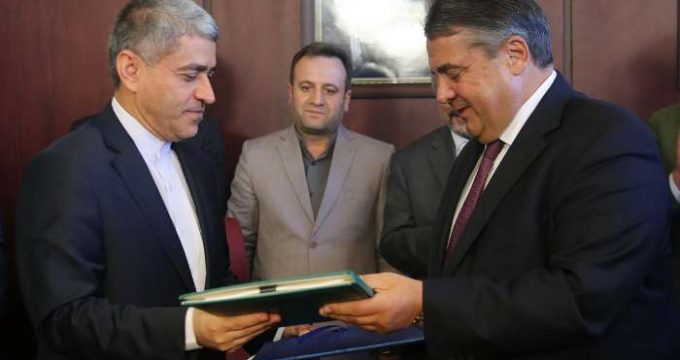 IMF Gives Government A Boost, But There May Be Problems Ahead

A dispute has arisen within Iran’s regime over a high-level German visit promising much-needed trade and investment.

The Rouhani Government celebrated the mission of Germany’s Economy Minister and Deputy Chancellor, Sigmar Gabriel, along with 120 representatives from companies such as Siemens, the SMS metallurgy group, Keller HCW, and Mitsubishi Germany. Ten preliminary agreements with Iranian companies were signed.

The German Federal Bank and the Central Bank of Iran also signed a cooperation agreement. The German banking sector has been reluctant to underwrite business deals, fearing continued US sanctions.

But, as the discussions were taking place, head of judiciary Sadegh Amoli Larijani put out a far different message. He said that Gabriel should have been denied entry to the country because of his criticism of Iran’s human rights record.

Critics also objected to Gabriel’s trip after he told the magazine Der Spiegel that the Islamic Republic can have normal and friendly relations with Germany “only when it accepted Israel’s right to exist”.

Foreign Minister Mohammad Javad Zarif responded, “No one can set conditions for Iran and Iran is an independent country.”

See Iran Daily, Oct 3: Tehran Warns US — Your Intervention in Syria Would Be “Suicidal”

The Government hoped Gabriel’s mission could be a breakthrough, as Tehran struggles to confirm renewed links with Europe, despite January’s implementation of the nuclear deal between Iran and the 5+1 Powers.

There was a rush of optimism early this year as President Rouhani visited Italy and France to announce multi-billion-dollar deals. However, European companies and banks have been hesitant to renew links amid concerns about continued US sanctions and Iranian regulations.

A $25 billion deal with France’s Airbus for 118 passenger planes has been stalled because of the need for US licenses, although a first delivery of 18 aircraft has now been approved for next year.