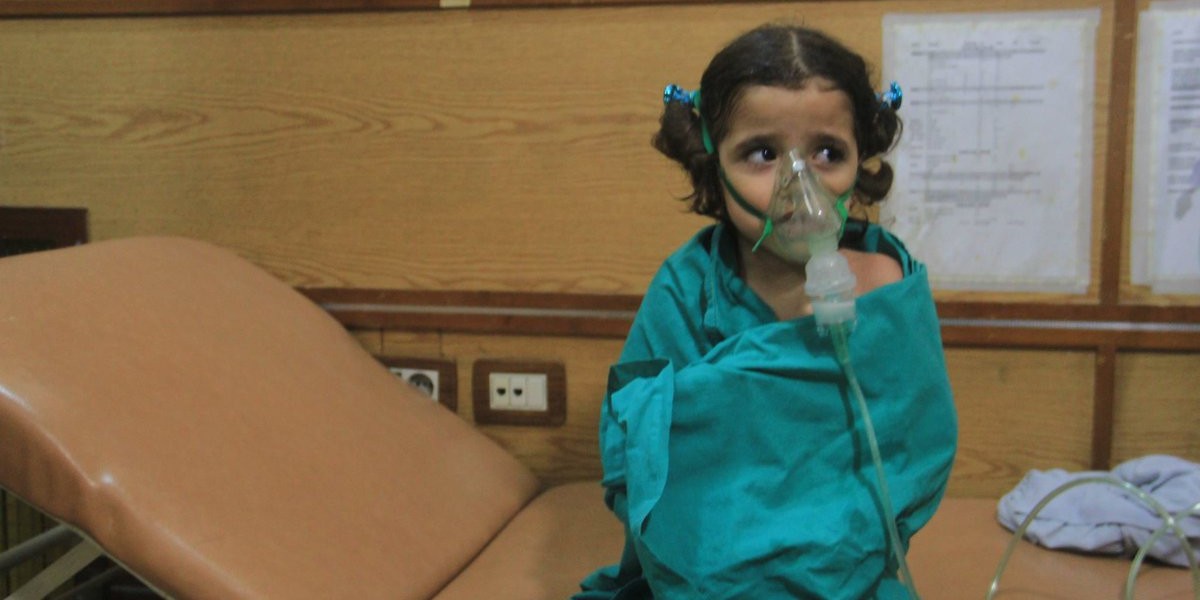 As the Assad regime continues its chemical attacks on opposition areas in Syria, Simon Cotton of the University of Birmingham explains how chlorine became a weapon.

Here’s what you need to know about chlorine and its use as a chemical weapon.

From Gas to Disinfectant

The chemical element chlorine is too reactive to exist on its own in nature, but some of the compounds that contain it are essential to life. We use hydrochloric acid (HCl) in our stomachs to break down food and destroy bacteria, while sodium chloride (NaCl) – the common salt we add to food – is so important that it was once used as a currency.

Pure chlorine was first isolated from hydrochloric acid by Carl Wilhelm Scheele in 1774. Within a few years, its bleaching properties were discovered and in 1810 Humphry Davy announced that it was a chemical element. At room temperature, it is a greenish-yellow gas with a choking smell, which is denser than air.

Dry chlorine gas will not bleach, but in water it forms hypochlorite, responsible for the bleaching action, and also responsible for its disinfectant action. It was first used to disinfect tap water at the time of a typhoid outbreak in Maidstone in 1897. Since then the process has been generally adopted.

Forty million tons of chlorine is manufactured a year, among other things for use in making many pharmaceuticals. Thousands of organic chlorine compounds occur naturally including vancomycin, which for many years was the antibiotic of last resort and is made in nature by a bacterium in the soil.

But chlorine itself is very reactive with the human body and very toxic. It irritates the eyes and skin and, even at quite low levels, can causes permanent lung damage even if it does not kill you. Breathing high levels of chlorine causes pulmonary edema – fluid buildup in the lungs.

Accidents with chlorine do happen. In Graniteville, South Carolina, on January 6 2005, a railroad tanker full of liquefied chlorine gas was punctured killing eight people that day, with another fatality three months later attributed to inhaling the gas. More than 5,000 people were evacuated from its immediate vicinity and some have health problems more than ten years later.

Use as a Weapon

Fritz Haber (1868-1934) knew about the toxicity of chlorine when he chose it as his agent of warfare in 1915. He had already come up with the Haber-Bosch process, patented in 1910, for the fixation of nitrogen as ammonia, which won him the 1918 Nobel Prize in chemistry. This made the manufacture of artificial fertilizers possible and the survival of millions of people today depends on it.

But it also enabled the mass production of nitric acid, source of the explosives that Germany used in World War I. Haber was an intensely patriotic German Jew. He was head of the chemistry section in the Ministry of War, coordinating the production of ammonia needed to fight the war. He was also in charge of chemical warfare, choosing chlorine gas as the agent.

Haber supervised the installation of the first chlorine gas cylinders in the trenches on the Western front, near Ypres. He and the specialist troops waited for the wind to blow from the east towards the Allied trenches and launched the first gas attack on April 22, 1915. As clouds of chlorine drifted towards the Allies, panic set in. It was no good diving into a trench, as the dense chlorine was heavier than air and poured in. Of the 15,000 or more casualties, 5,000 soldiers were killed.

Haber’s story ended tragically in several ways. He returned home to a celebration of the success of the attack on May 1 but that night his wife Clara committed suicide after an argument – possibly over the morality of what he was doing. A few years later he developed a system for getting rid of insect pests, using hydrogen cyanide. It became known as the Zyklon system. A derivative pesticide, Zyklon B, was used to exterminate millions in Nazi concentration camps, where many of Haber’s close relatives died.

Gas masks were developed to protect against chlorine attacks and other chemical warfare agents were developed. But chlorine remains the simplest chemical weapon and reappeared on the battlefield during the Iraq War and allegedly now in Syria. In World War II, both sides of the conflict knew that the other side had weaponized chlorine and refrained from using it. Today in Syria, it sadly appears this may not have been the case.