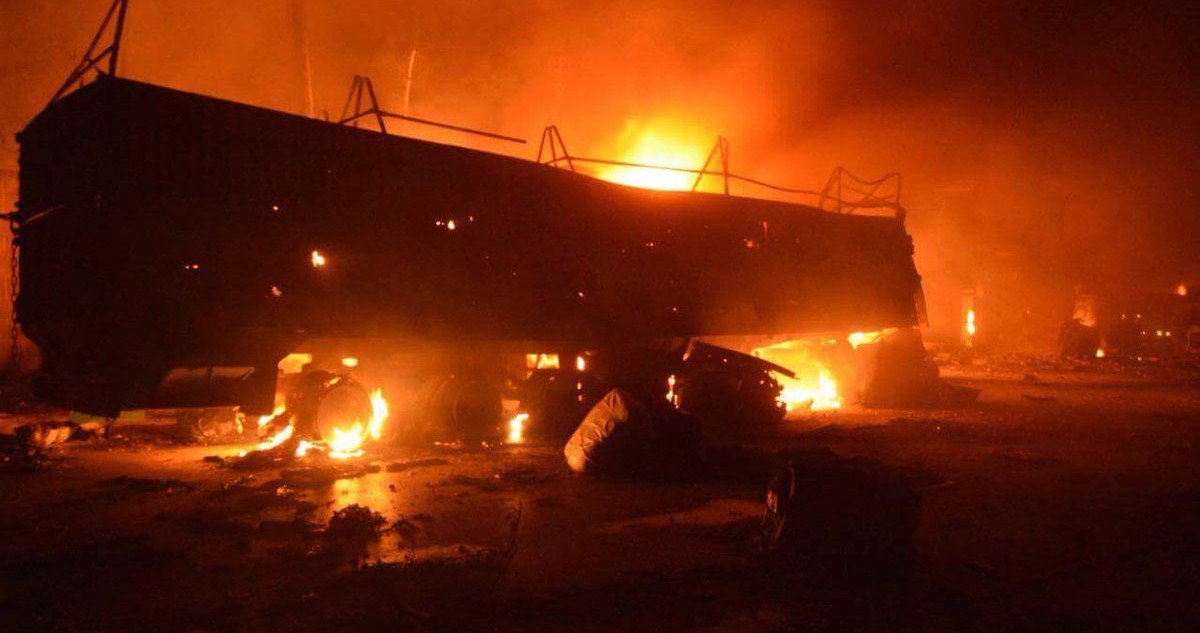 UPDATE 1840 GMT: After a meeting with Russian Foreign Minister Sergei Lavrov and other foreign ministers in New York, US Secretary of State John Kerry insisted: “The ceasefire is not dead.”

British Foreign Secretary Boris Johnson offered support: “Quite frankly, the Kerry-Lavrov process is the only show in town and we have to get that show back on the road.”

UPDATE 1830 GMT: The UN has pulled back from saying that airstrikes devastated its aid convoy.

The organization put out a revised version of an earlier statement, replacing “airstrikes” with unspecified “attacks”.

UN humanitarian spokesman Jens Laerke said the references to airstrikes in the original statement were probably the result of a drafting error: “We are not in a position to determine whether these were in fact airstrikes. We are in a position to say that the convoy was attacked.”

The US continued to say that it believes the convoy was hit by an airstrike which could only have been carried out by Russia or the regime military. Brett McGurk, the Presidential envoy to the coalition fighting the Islamic State, said:

For a convoy to be targeted in an air strike is truly outrageous. Again we don’t know exactly what happened, we’re working through it, but we think it was an airstrike.

UPDATE 1745 GMT: Having denied that it attacked the UN aid convoy and suggested that rebels were responsible, Russia is trying a new line.

Russian State outlet Sputnik is indicating that the trucks made themselves a target because of an armed escort: “UN aid convoy accompanied by terrorists’ off-road vehicle with large-caliber mortar launcher.”

UPDATE 1530 GMT: UN officials say they were informed of the airstrikes but that — despite “communications with parties to the conflict” — the attacks continued.

UPDATE 1420 GMT: The Russian Defense Ministry has denied any responsibility by Russian or Assad regime forces for the attack on the UN aid convoy.

“Russian and Syrian warplanes did not carry out any airstrikes on a UN humanitarian aid convoy in the southwest of Aleppo,” Ministry spokesman Igor Konashenkov said.

Konashenkov insinuated that rebels attacked the convoy: “All of the video footage demonstrates that the convoy caught fire, which strangely happened almost at exactly at the same time as militants started a large scale offensive on Aleppo.”

But the spokesman also appeared to say that no weapons at all set the convoy alight:

We have closely studied the video footage from where the incident took place and we did not find any signs of any ammunition having hit the convoy. There are no craters, while the vehicles have their chassis intact and they have not been severely damaged, which would have been the case from an airstrike.

Contrary to Konashenkov’s statement, there are no “militants” in the area of Orem al-Kubra in western Aleppo Province, where the convoy was making its delivery (see Artur Rosinski’s map below).

Konashenkov also asserted that Moscow had no knowledge about the convoy after its arrival at the warehouses:

Around 13:40 Moscow time (10:40 GMT) the aid convoy successfully reached the destination. The Russian side did not monitor the convoy after this and its movements were only known by the militants who were in control of the area.

However, drone footage shows that the Russians were tracking the convoy as it traveled to Orem al-Kubra, with the trucks visible at the 57-minute mark in this video:

After a meeting with US Secretary of State John Kerry and other foreign ministers, Russian Foreign Minister Sergei Lavrov admitted that the Russian military had been monitoring the convoy, but he insisted that the Russians had “lost track of it when it entered rebel territory”.

UPDATE 1000 GMT: The UN and Syrian Arab Red Crescent have suspended all operations in Syria.

ORIGINAL ENTRY: Syria’s Assad regime and/or its Russian ally has bombed a UN aid convoy, as it ended a seven-day US-Russian ceasefire.

The trucks of the UN and Syrian Arab Red Crescent were delivering assistance at warehouses in Orem al-Kubra in Aleppo Province when they were attacked. The warplanes then struck a second time in a “double tap” operation, as rescuers tried to assist the wounded from the first assault.

A local resident reported five missile strikes. Of the 31 trucks, 18 were hit.

At least 20 people were killed. The Red Crescent director in the Aleppo area and 11 other personnel died, while 18 were wounded. Bodies burned inside vehicles and could not be retrieved because of the ongoing attacks.

See other video and photographs in Monday’s Syria Daily

There can be no explanation or excuse, no reason or rationale for waging war on brave and selfless humanitarian workers trying to reach their fellow citizens in desperate need of assistance….

Let me be clear: if this callous attack is found to be a deliberate targeting of humanitarians, it would amount to a war crime. I call for an immediate, impartial and independent investigation into this deadly incident. The perpetrators should know that they will one day be held accountable for violations of international humanitarian and human rights law.

There was also pro-Assad bombing of parts of opposition-held eastern Aleppo city, with the Syrian American Medical Society reporting 12 dead in one attack and posting pictures and video of injured children.

“It started with an hour of extremely fierce bombing,” said Besher Hawi, the former spokesman for the opposition city council. “Now I can hear the sound of helicopters overhead. The last two were barrel bombs.”

Video showed bombing of eastern Aleppo through the night.

Rescue efforts in the Sukkari district:

The Local Coordination Committees documented 74 deaths across Syria on Monday, including 45 in Aleppo Province.

Assad and Russia: Ceasefire is Over

The Syrian military announced the “end of the freeze on fighting” on Monday afternoon, claiming — without evidence — that rebels had breached the ceasefire more than 300 times.

Syrian servicemen and peaceful citizens are still dying. The cause of this is the fact the United States has no effective leverage to influence Syria’s opposition and is unaware of the real situation on the ground.

Considering that the conditions of the ceasefire are not being respected by the rebels, we consider it pointless for the Syrian government forces to respect it unilaterally.

The Syrian military had resumed bombing before Monday’s developments, with airstrikes from the northwest to the south of Syria over the weekend. Among them was an attack on Dael in Daraa Province which killed at least 12 people and wounded dozens.

However, the Russian-regime announcements and the bombing of the aid convoy shredded any prospect of a stoppage which would allow aid and open the way to political talks.

They also exposed a US position which seemed detached from reality, as Secretary of State John Kerry said, “[The ceasefire] was quite good last night, trucks are moving, let’s see how it goes today.”

As reports of the bombings were confirmed, a “senior Obama administration official” said:

We don’t know if [the ceasefire can be salvaged.

At this point the Russians have to demonstrate very quickly their seriousness of purpose because otherwise there will be nothing to extend and nothing to salvage.

State Department spokesman John Kirby said the US was “outraged”: “The United States will raise this issue directly with Russia. Given the egregious violation of the Cessation of Hostilities, we will reassess the future prospects for cooperation.”

However, Kerry continued to hesitate over what action might be taken:

Well, the Syrians do not – didn’t make the deal. The Russians made the agreement. So we need to see what the Russians say. But the point – the important thing is the Russians need to control Assad, who evidently is indiscriminately bombing, including of humanitarian convoys. So let’s wait and see and collect the facts. We need to see where we are, and then we’ll make a judgment. But we don’t have all the facts at this point.

As it announced the end of the ceasefire, the Russian Defense Ministry declared that “militants” interrupted an online video broadcast with shelling on the front southwest of Aleppo.

The Ministry said, a web camera “monitoring the implementation of the ceasefire reigme” was knocked out of service at the al-Assad Military Academy. It said no Russian servicemen were hurt.

Just after the start of the ceasefire last week, a Defense Ministry briefing was punctuated by a display on a large video screen of supposed rebel shelling of the main route north of Aleppo city.

Analysts evaluated that the “attack”, which featured two Russian officers clumsily diving to the ground and a reporter running for supposed safety, was probably staged.

The Defense Ministry proclaimed that an assault by the jihadists of Jabhat Fatah al-Sham, formerly Jabhat al-Nusra, was repelled with “some 100 militants of the group’s forward unit” killed and four tanks, three infantry fighting vehicles, and nine pickup trucks destroyed.

There is no corroboration elsewhere of the Ministry’s claims.

US Designates Jihadists of Jund al-Aqsa as “Terrorist”

The US has designated the jihadists of Jund al-Aqsa, who fight alongside rebel factions, as a “terrorist” organization.

The State Department said that Jund al-Aqsa was deployed as “a subunit of Al Qa’eda’s affiliate in Syria”, Jabhat al-Nusra, in 2012. It added that, although the group is now independent “it is still openly aligned” with Nusra, now called Jabhat Fatah al-Sham.

The Department said sanctions against Jund al-Aqsa are “a powerful tool”. However, far more significant is the likelihood that the US will now accept Russian airstrikes on the group as legitimate — under the US-Russian plan for Syria, JFS/Nusra is excluded from any ceasefire.

That in turn could give Moscow cover for its attacks on areas such as northern Hama Province, where Jund al-Aqsa is in an offensive alongside rebels which has taken a series of towns and villages this month.