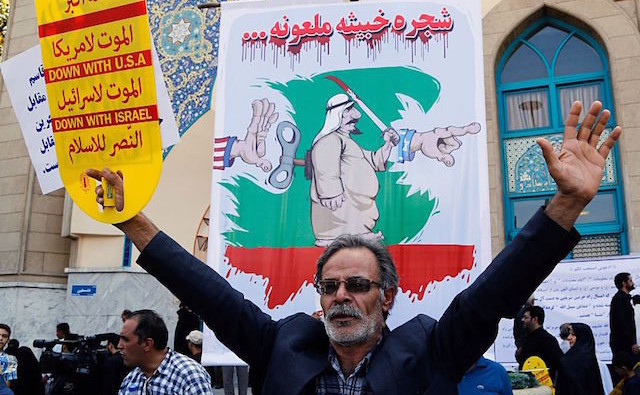 PHOTO: An anti-Saudi protester in Friday’s rallies in Iran (STR/AFP/Getty)

The al-Saud regime, which has brazenly revealed its age-old alliance with the Zionist enemy, is taking the holy Islamic sites hostage to realize its lowly and spiteful sectarian and political policies and use them to serve the arrogance and Zionism.

Zarif, issuing his message on the first anniversary of the deadly Mina stampede, the “unlimited obstinacy, imbecility, bigotry, and wealth of Saudi rulers have turned Al Saud into a ruthless and irrational regime”. This had plunged the Middle East and the world into the “most deplorable and disastrous” conditions in modern history by creating, nurturing, and spreading terrorism.

In a sign that the Rouhani Government’s foreign policy of engagement has been set aside, Zarif has abandoned his moderate tone for the regime’s harsh line towards the Saudis. On Wednesday, he tweeted — in response to the Saudi Grand Mufti’s declaration that Iranians are not Muslims — that there was “no resemblance between the Islam of Iranians and most Muslims and the bigoted extremism that Wahhabi top cleric and Saudi terror masters preach”.

Meanwhile, a senior cleric has proclaimed, “Today, the evil and accursed lineage of the House of Saud is the strategic extension of hegemony policies and the devil sect in our region.”

Hojatoleslam Ebrahim Raisi, the custodian of one of Iran’s most important religious charities, said, “We are not speaking about an incompetent and unworthy government, but an about an accursed and wicked regime that has stood shamelessly against Muslims, and slaughters in Yemen, Syria, Iraq and Bahrain.”

In the holy city of Qom, Ayatollah Hossein Nouri Hamedani said the Saudi monarchy “is the trash of the [Israeli] regime”: “It spends its oil and gas money in line with Israeli plots and acts against the teachings of Qu’ran.”

ORIGINAL ENTRY: Pressing its campaign against Saudi Arabia, Iran has called for a fact-finding committee into last September’s stampede near Mecca that killed thousands of Hajj pilgrims.

The head of the Hajj and Pilgrimage Organization, Saeed Ohadi, pressed the case on Saturday: “If the fact-finding committee will be formed, many realities of this bitter tragedy which is unprecedented throughout history of Islam will be unveiled,” Saeed Ohadi said on Saturday.

He pledged, “The Islamic Republic of Iran is firmly pursuing and redoubling efforts to restore the rights of the families of the Mina disaster victims.”

The Secretary of the National Security Council, Ali Shamkhani, reinforced the message as he said the deaths were “a stain on al-Saud that will never be removed.”

The tragedy occurred when two groups of pilgrims converged in Mina for the Stoning of the Devil ceremony. Among the victims were 464 Iranians.

Iranian officials have always accused Saudi counterparts of negligence over the disaster, and the affair — as well as ongoing conflict over crises such as the Syrian civil war and Saudi military intervention in Yemen — contributed to the Saudi breaking of relations with Iran in January.

However, Iran’s rhetorical campaign has escalated sharply in the past week, beginning with the Supreme Leader’s Hajj message which condemned Saudi “traitors” as vassals of the US and Israel. Saudi Arabia’s Grand Mufti responded that Iranians are not Muslims, leading to Ayatollah Khamenei’s further denunciation of the “vicious and barbaric progeny of al-Saud”.

On Friday, the Iranian regime organized marches across the country to chant against the monarchy of Saudi Arabia and of its close ally Bahrain.