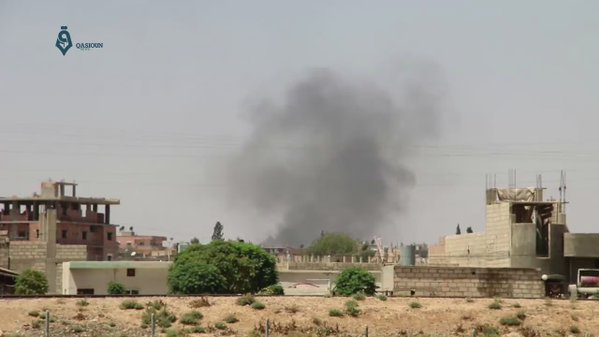 PHOTO: Smoke rises from a claimed regime airstrike on Kurdish positions in Hasakah in eastern Syria on Thursday

UPDATE 1800 GMT: The Pentagon said that it scrambled US jets on Thursay as regime warplanes bombed Kurdish positions in Hasakah, emphasizing that it would defend American troops in the area.

The US scrambled fighters to confront the Su-24s, which were departing the area as the American planes arrived. The US also called the Russian military on a safety of flight hotline, and were told that the warplanes were not Russian-piloted.

“We will ensure [US troops’] safety and the Syrian regime would be well advised not to do things that would place them at risk,” said Davis.

Asked if the US would shoot down regime aircraft that threatened American personnel, Davis said, “We have the inherent right to self defense. When anybody is striking against U.S. forces, and U.S. forces are at risk, we have the right to take action.”

UPDATE 1345 GMT: Kurdish outlets claim that their forces have advanced in regime-controlled areas of Hasakah, taking about 90% of the El Newşe neighborhood. They said that clashes continue elsewhere in the city.

The pro-regime Al-Masdar News has acknowledged the Kurdish attacks, especially in the Guweiran District. It said that the Syrian Air Force carried out an airstrike to check the assault.

ORIGINAL ENTRY Regime and Kurdish forces have renewed their battles in the eastern Syrian city of Hasakah, with the Syrian Air Force bombing Kurdish positions for the first time.

The latest clashes began on Wednesday, with each side blaming the other for attacks on checkpoints in the city, where there has been divided control since 2013. A ceasefire on Wednesday night quickly collapsed, with more Kurdish claims that the Syrian army and militia were firing on the Kurdish security force Asayish.

On Thursday, the Syrian air force began its bombing, according to Kurdish officials. YPG spokesman Redur Xelil said, “There are martyrs and wounded.”

A “government source in the city” said that the strikes were “a message to the Kurds that they should stop this sort of demand that constitutes an affront to national sovereignty”.

The Kurdish militia YPG said it would “not be silent” over what it called it an act of aggression: “Every hand spattered with the blood of our people will be held to account through all possible and available means.”

The Syrian regime is apparently working with some regional countries and especially Turkey, which intervened directly in Syria and Rojava [Syrian Kurdistan].

This is an indication of coordination between Turkey, Iran and the Baathist regime in Syria, to stop the implementation of the democratic project in northern Syria and Rojava.

A Brief US Intervention?

Local sources said US jet fighters tried, for the first time in the conflict, to check the Syrian air force; however, the bombing resumed as soon as the American jets left the area.

Government forces were also bombarding Kurdish districts of Hasakah with artillery, according to Kurdish officials.

A pro-Assad website declared an “all-out battle for control” of Hasakah, although it denied any regime bombing.

The unofficial “Syrian Arab Army” Facebook page initially said the US had tried to intercept regime warplanes, but it later retracted the statement.

There have been periodic clashes between regime and Kurdish forces in Hasakah and in the eastern city of Deir ez-Zor, where there is also divided control, followed by ceasefires to maintain the positions of each side.

Claimed aftermath of a regime airstrike: 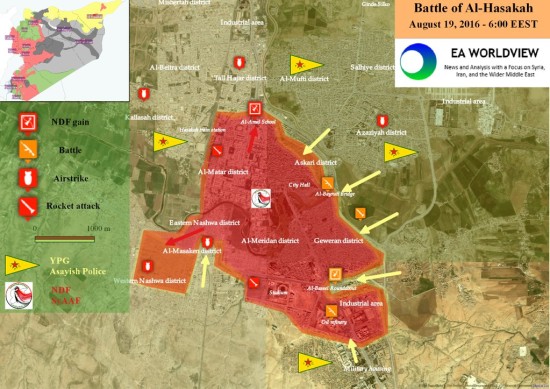 The spokesman emphasizes that “this is not a re-branding” but the establishment of a “completely independent” entity — “a necessary step forward for the reunification of ranks in Syria…to remove any obstacles for a merger” of rebel factions.

The Russian Defense Ministry has denied any responsibility for the attack in Aleppo city that injured 5-year-old Omran Daqneesh, whose image has sparked renewed interest in civilian casualties.

See Syria Feature: Will This Injured Boy’s Iconic Photo Change Anything? Probably Not.

The Ministry said that it never targets populated areas and that rebels themselves hit urban neighborhoods to prevent humanitarian aid.

The Ministry insisted that, as footage of the boy’s rescue showed windows in a nearby house intact, the home of Omar’s family was hit with a rebel mine.

The health of conjoined twins, evacuated last Friday from the besieged Damascus suburbs, is deteriorating and they need to be moved outside Syria, according to a doctor.

Moath and Nawras were born on July 23. The Assad regime initially blocked their evacuation, but relented after the Syrian American Medical Society drew attention to their case and local doctors urged international organizations to act.

Conjoined at the stomach and pericardial sac, the twins are in a private hospital in Damascus, but the facility does not have the staff or equipment for specialized micro-surgery to separate them.

The doctor is pressing Lebanese authorities to allow the transfer of the twins to Beirut: “We are trying to move them as soon as possible so we can save their lives.”

As it continues intense bombing throughout northern Syria, Russia has renewed its PR line that it will support a brief “humanitarian pause” in Aleppo city.

While bombing to support the Assad regime, Russia has regularly proclaimed that it is seeking humanitarian initiatives. Last month, after helping ensure a pro-Assad siege on opposition areas of Aleppo, Moscow said it was pursuing “humanitarian corridors”, but these were never established.

The Defense Ministry then suggested a three-hour pause during the day to deliver aid, but UN officials said this was not sufficient to ensure security for assistance.

On Thursday, De Mistura said the UN was suspending humanitarian operations because of fighting and bombing.

The local council of the besieged town of Darayya, southwest of Damascus, says barrel bombs with napalm have put the last hospital out of operation.

The White Helmets civil defense organization reports the death of another volunteer rescuer:

we are tired and sad in lost another hero today
WhiteHelmets Hero Manar abo Mohammad in daraya.
May he rest in peace pic.twitter.com/JQyYAdpOF6

More than 130 White Helmets volunteers have been killed by Russian and regime attacks.