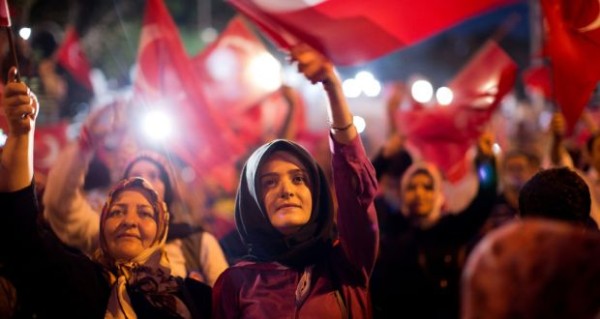 Last week, WikiLeaks claimed another victory against authority through the publication of about 300,000 e-mails from Turkey.

The site — famous for its exposés through document dumps of US operations in Iraq and Afghanistan to dissemination of the correspondence of Hillary Clinton and the Democratic National Committee — said the “Erdogan e-mails” were confirmation of the corruption within the Turkish government, which had just foiled a coup attempt. Western media reports, as well as the former National Security Agency employee Edward Snowden, echoed the narrative.

However, leading social media analyst Zeynep Tufekci saw something far different when she looked at the documents: “An unaccountable group effectively doxed [published the personal information of] millions of women and members of a political party targeted by [the] coup.”

WikiLeaks has not taken this well. It has labelled Tufekci — a prominent critic of the Turkish Government’s restrictions on the media — a lackey of President Recep Tayyip Erdoğan:

@DGisSERIOUS The story is fabricated by an Erodogan (AKP) apologist in Turkey. We have already lodged a complaint with Arriana Huffington.

@zeynep Correct your baseless story and stop running flak for Erodogan or we will file a formal complaint with HuffintonPost & others.

WikiLeaks was able to seize on a slip in the original story — it did not directly publish the databases with the women’s names, but merely provided links to them. However, it has not refuted any of the other points made by Tufekci, including those about the risk to women from the exposure of personal information.

Still, the site still insists the article has been “fabricated”.

For many, blocking WikiLeaks was confirmation that the emails were damaging to Turkish President Recep Tayyip Erdogan and the government, revealing corruption or other wrongdoing. There was a stream of articles about “censorship.” Even U.S. National Security Agency whistle-blower Edward Snowden tweeted the news of the WikiLeaks block with the comment: “How to authenticate a leak.”

But Snowden couldn’t have been more wrong about an act that was irresponsible, of no public interest and of potential danger to millions of ordinary, innocent people, especially millions of women in Turkey.

And yet Western media reports, ranging from Reuters to Wired, some from journalists I know and respect, made the same assumptions Snowden did. They merely reported the block as an act of censorship and reported WikiLeaks’ allegations of what the emails may contain, without apparently any cursory check.

Journalists and anti-censorship activists who I am in touch with in Turkey have been combing through the leaked documents, and I am not aware of anything “newsworthy” being uncovered. According to the collective searching capacity of long-term activists and journalists in Turkey, none of the “Erdogan emails” appear to be emails actually from Erdogan or his inner circle. Nobody seems to be able to find a smoking gun exposing people in positions of power and responsibility. This doesn’t rule out something eventually emerging, but there have been several days of extensive searching.

However, WikiLeaks also posted links on social media to its millions of followers via multiple channels to a set of leaked massive databases containing sensitive and private information of millions of ordinary people, including a special database of almost all adult women in Turkey.

Yes — this “leak” actually contains spreadsheets of private, sensitive information of what appears to be every female voter in 79 out of 81 provinces in Turkey, including their home addresses and other private information, sometimes including their cellphone numbers. If these women are members of Erdogan’s ruling Justice and Development Party (known as the AKP), the dumped files also contain their Turkish citizenship ID, which increases the risk to them as the ID is used in practicing a range of basic rights and accessing services. The Istanbul file alone contains more than a million women’s private information, and there are 79 files, with most including information of many hundreds of thousands of women. 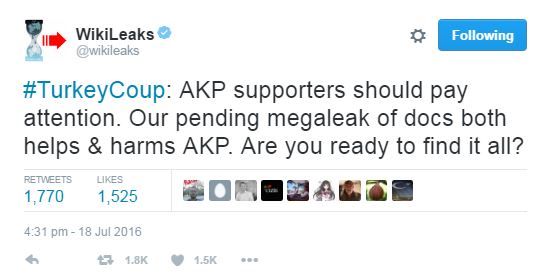 WikiLeaks’ misleading publicity over the e-mails

We are talking about millions of women whose private, personal information has been dumped into the world, with nary an outcry. Their addresses are out there for every stalker, ex-partner, disapproving relative or random crazy to peruse as they wish. And let’s remember that, every year in Turkey, hundreds of women are murdered, most often by current or ex-husbands or boyfriends, and thousands of women leave their homes or go into hiding, seeking safety.

I have confirmed that these files indeed appear to contain correct private information by confirming that dozens of my friends and family members in multiple cities were included in that database, to my horror, with accurate private data. The files also include whether or not these women were AKP members — right after a brutal and bloody coup attempt to overthrow the AKP.

Another file appears to contain sensitive information, including Turkish citizenship IDs of what appears to be millions of AKP members, listed as active or deceased. Yet another file contains the full names, citizenship IDs and cellphone numbers of hundreds of thousands of AKP election monitors — the most active members of the party.

I’ve long been critical of the AKP’s censorship practices in Turkey and will continue to speak out. But there is not a single good reason to put so many men and women in such danger of identity theft, harassment and worse — especially after the country was rocked by a bloody coup targeting this political party. I also cannot understand why the leak of such private and sensitive information has been met with such uncritical reporting during such a dangerous week.

The leaked emails published by WikiLeaks were presented in a searchable database, illustrated with a caricature of Erdogan using a flying carpet titled “FROM: AKP” to knock down pillars of democracy. I couldn’t care less about the Orientalist imagery — it’s just stupid. The main problem here is deception — because the emails are not actually from the AKP. Rather, most are emails sent to the ruling party in what appears to be a Google group. There are some emails here and there from gov.tr and akp.org.tr domains, but they are not inner-circle emails as far as anyone who has looked has yet found.

These emails are what you expect: chain emails, recipes, wishes for happy holidays, spam emails, pleas for jobs, serious emails imploring some pothole or other problem be fixed. Some of these emails are just forwarded to a group, the way emails often are. They are un-redacted and often include personal information.

Much of mass media in Turkey has been ignoring this leak, partly because the coup attempt fallout has understandably consumed their attention and partly because the Turkish press is not known for its investigative tendencies. However, links to these files have been circulating widely on Turkish social media, and I fear the damage is done. WikiLeaks should take down its links to all personal information as soon as possible.

Western journalists have barely commented on the content of the files. And yet, it didn’t stop them from reporting on it. Even those working for what should be the most eagle-eyed outlets have been merely reporting name searches. For example, one journalist who noted that former House Speaker Denny Hastert was “mentioned” was retweeted almost 500 times, as if this was an important piece of information. Even a cursory Google search of a phrase from that particular email would have revealed that it was actually a copied-and-pasted 2014 news article speculating about a Turkish businessman visiting the U.S.

This kind of misreporting was widespread. Parroting WikiLeaks’ claim, the Christian Science Monitor reported that 1,400 of the emails were allegedly related to Fethullah Gulen, a cleric who leads a secretive global network and who the government blames for the coup. This batch of 1,400 emails was actually merely a keyword search for the phrase “Gulen,” which also means “smiles” or “smiling” in Turkey, so ads for vacations by the Mediterranean (“Çeşme’s smiling face!”) were included in these allegedly incriminating “1,400 emails” along with pasted public news articles mentioning the name of the embattled cleric.

“Discretion is Not Censorship”

Last week, Turkey experienced a bloody coup that was stopped by citizens (including women) facing tanks and sniper fire and getting shot and killed. In the midst of all this, an unaccountable group effectively doxed millions of women and members of a political party targeted by that coup. And not a single news story (that I could find) mentioned these facts or that the emails contained nothing of public interest.

I hope that people remember this story when they report about a country without checking with anyone who speaks the language; when they support unaccountable, massive, unfiltered leaks without teaming up with responsible parties like journalists and ethical activists; and when they wonder why so many people around the world are wary of “internet freedom” when it can mean indiscriminate victimization and senseless violations of privacy. Discretion is not censorship.

This blog has been updated to reflect that WikiLeaks promoted links to the databases via its social media accounts but did not host those databases on its own site.