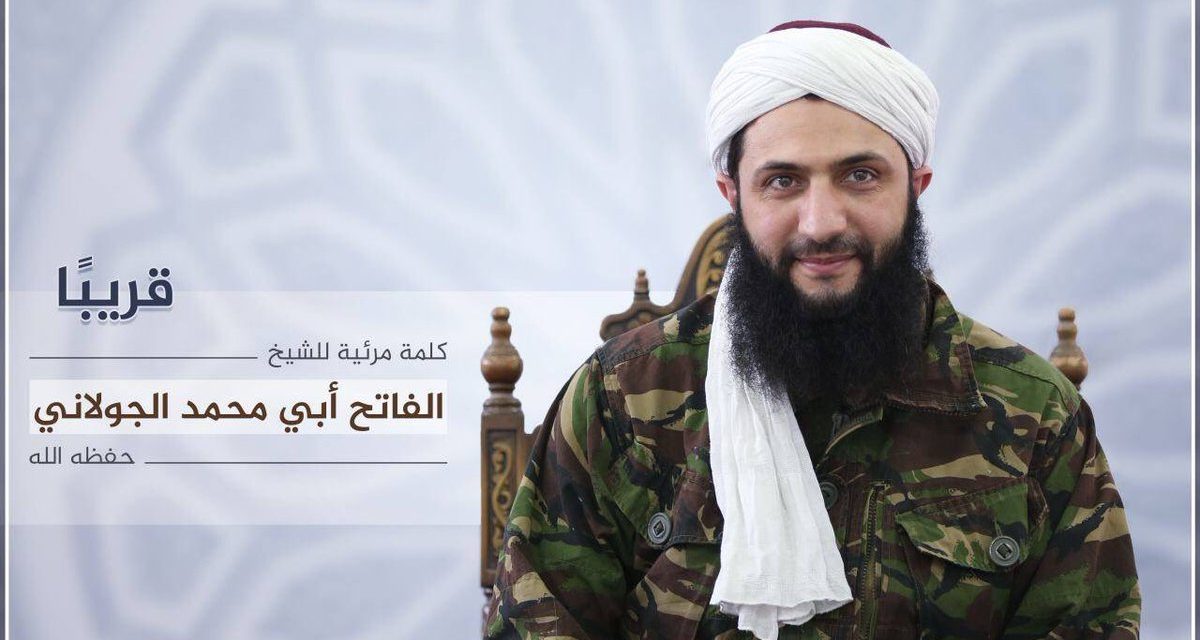 The announcement has been expected for days and was preceded earlier on Thursday by a message from Al-Qa’eda leader Ayman al-Zawahiri endorsing the detachment for the sake of unity in the fight against the Assad regime and Islamic State.

After thanking Zawahiri and invoking the words of Osama bin Laden, Joulani announced the separation “in the necessity of the continuity of the jihad of al-Sham [Syria]”. The re-organized Nusra will be known as “Jabhat Fatah al-Sham”.

Joulani pointed to attempts for a “unified body” with rebel factions to bring together “the masses of the people, liberating their lands, giving victory to their faith, and upholding their testimony of faith”.

He denounced the US and Russia for their bombardment and displacement of Syria “under the pretense of targeting Jabhat al-Nusra”.

In The Name of Allah, the Beneficent, the Merciful,

All praise is due to Allah, Lord of all, and may the peace and blessings of Allah be upon His Messenger, Mohammad, his family, and his companions as for what is to follow,

To my fellow Muslims everywhere, to the honourable people of Syria;

We would like to thank our brothers, the commanders of al-Qaeda in general, Dr. Sheikh Ayman Al-Zawahiri and his vice, Sheikh Ahmad Hasan Abu Al-Khayr especially, may Allah protect them.

We thank them for their stance, whereby they gave priority to the interests of the people of Al-Sham, their Jihad, their revolution, as well as their proper assessment of the general benefits of the Jihad.

This noble stance will be recorded in the annals of history.

Their blessed leadership has, and shall continue to be, an exemplar of putting the needs of the community and their interests before the interest of any individual group.

We, of the central command of Jabhat Al-Nusra, in accordance with the general guidelines and directives of the aforementioned leadership, our obligations in serving the people of Al-Sham and their Jihad, lightening the weight upon the shoulders of the people, without compromising or sacrificing our solid beliefs, or laxity in the necessity of the continuity of the Jihad of Al-Sham, which we will continue protecting using all Islamically legitimate means which assist in the attainment of these objectives or ends in the achievement of these lofty goals.

As we strive to bridge the gaps between the groups of Mujahideen and ourselves, we hope to form a unified body, whose basis is Al Shura, uniting the masses of the people of Al-Sham, liberating their lands, giving victory to their faith and upholding their testimony of faith.

Fulfilling the requests of the people of Al-Sham to expose the deceptions of the international community, the leaders being the US and Russia, in their relentless bombardment and displacement of the Muslim masses of Al-Sham under the pretence of targeting Jabhat al-Nusra, an al-Qaeda affiliate.

For the aforementioned reasons, we declare the complete cancellation of all operations under the name of Jabhat Al-Nusra, and the formation of a new group operating under the name “Jabhat Fath Al-Sham”, noting that this new organization has no affiliation to any external entity.

This new formation aims to fulfil the following:

1. Work toward establishing the religion of Allah (swt), His Shari’ah (law) as legislation, establish justice among all people.

2. Strive toward unity with all groups, in order to unify the ranks of the Mujahideen and liberate the land of Al-Sham from the rule of the tyrant and his allies.

Allah (swt) said: “And hold onto the rope of Allah all of you together and do not be disunited”.

3. Protect the Jihad of Al-Sham and assure its continuity, utilizing all Islamically legitimate means to do so.

4. Strive to serve the Muslims, attending to their daily needs and ease their hardship in every possible way.

5. Ensure security, stability and honourable life for the general masses.

All praise is due to Allah, Lord of all.