BBC Radio: Orlando Shootings — “Not A Damn Thing Will Be Done About Guns” 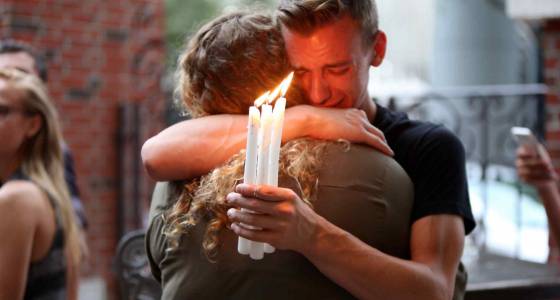 PHOTO: Grieving at the scene of Sunday’s Orlando shootings

I spoke with BBC outlets fully and frankly this morning about the killing early Sunday of more than 50 people, with more than 50 injured, in a Orlando, Florida nightclub.

I chose not to maintain “objectivity” for these interviews. My sorrow and anger is fed by the belief that nothing will be done about the fundamental cause not only of recurrent mass shootings but also of the ten of thousands of people who died in individual incidents each year.

That cause is not “Islamic terrorism” or the Islamic State — although Donald Trump is already perverting the Orlando deaths to feed the Islamophobia, fear, and hatred propelling his Presidential campaign.

That cause is not the derangement of an individual who, in this case, acted out on homophobia to kill and wound the innocent.

That cause is the availability of guns. Without them, could Omar Mateen have wielded a knife to cause more than 100 casualties?

But this fundamental will soon disappear — indeed, it has already disappeared in the response of a Hillary Clinton, who talks about “international terrorsm”, “security”, and Trump’s “narcissism” but never mentions “guns”. For political and cultural reasons, not a damn thing will be done.

The deadly Groundhog’s Day will go on and on, each time corroding just a bit more the essentials of life in the US.