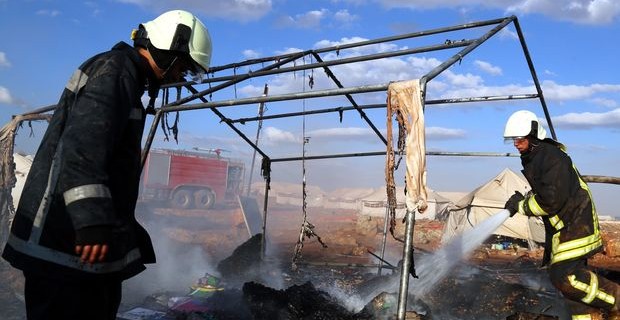 PHOTO: Firemen at the Karmouna refugee camp after Thursday’s airstrikes

US Spokesman — “I Was Wrong. Nusra Does Not Control Aleppo”

Russia’s Ministry of Defense lied on Friday about a deadly airstrike on a refugee camp in northwest Syria the previous day.

More than 30 people were killed in the attack on the Kamouna camp, near the town of Sarmada in Idlib Province close to the Turkish border.

Videos showed the aftermath of the initial strike by four missiles, with rows of tents destroyed, damaged, and smoking. Clothing, cooking pots, and body parts were scattered on the ground. A truck was filled with wounded people moaning and crying.

See “War Crime” as 30+ Killed in Strike on Refugee Camp

While it is not certain whether the attacks were carried out by Russian or Syrian warplanes, journalists and activists pointed to the Assad regime.

Trying to divert blame for the attack, which came hours after the Syrian military said it would observe a temporary truce in areas such as Aleppo city, Russia’s Ministry of Defense declared that the jihadists of Jabhat al-Nusra may have shelled the area.

We have attentively studied the information from the air space monitoring data in this area for May 4 and 5, 2016. There were no flights by Russian or any other aircraft.

Judging by the damage shown in photographs and video, the camp may have been shelled either on purpose or by mistake by multiple rocket launchers which are currently being used very actively in this area by terrorists from Al-Nusra.

Konashenkov did not present any of the data, nor did he respond to the evidence and witnesses that established the airstrikes on the camp.

The Defense Ministry has regularly denied Russian or regime aerial attacks on civilian targets, blaming others without evidence. Earlier this year, Moscow dismissed dozens of strikes on medical facilities by its warplanes with the declaration that some of the hospitals did not exist.

On April 28, a day after missiles killed 55 people and destroyed the al-Quds Hospital in east Aleppo, Konashenkov said the assault was by US-led coalition aircraft.

Russia later said that satellite photographs showed there had been no damage to the hospital.

Pro-Assad bloggers, who routinely recycle the Russian denials, quickly spread the latest line. The Moon Over Alabama blog, blared, “An ‘Airstrike’ That Did Not Happen”, asserting that the White Helmets rescuers at the scene are part of an American and British propaganda campaign.

Earlier this month, after five White Helmets personnel were killed in Russian or regime strikes on their building west of Aleppo, pro-Assad activists asserted that the organization is linked to “Al Qa’eda”.

Breaking its silence over the attack, the Syrian military followed Konashenkov’s lead, insisting, “There is no truth to reports…about the Syrian air force targeting a camp for the displaced in the Idlib countryside.”

However, the UN High Commissioner for Human Rights, Zeid Ra’ad al-Hussein, said evidence suggested a government plane was responsible for the “murderous attacks”:

Given these tent settlements have been in these locations for several weeks, and can be clearly viewed from the air, it is extremely unlikely that these murderous attacks were an accident.

The UN’s head of humanitarian operations, Stephen O’Brien, said on Thursday, “The suspicion will fall initially on the Syrian government and we will want to make sure that they, or whoever it is, are fully held to account for this absolutely abominable act.”

France echoed the remarks, declaring a “revolting and unacceptable act that could amount to a war crime or crime against humanity”.

Claimed Video: Russian Base Near Palmyra

Claimed footage of a Russian military base near Palmyra, the historic city in central Syria recaptured from the Islamic State in late March:

Russian forces were involved, at least in an advisory role, in the battle to retake Palmyra. They have also led the effort to clear the area of mines.

The footage shows the protection of the base with a Pantsir anti-aircraft system.

Pro-opposition Qasioun News reports that Assad forces have regained a village lost in the southern Aleppo offensive by rebels and Jabhat al-Nusra this week.

The Syrian military and foreign allies took Khirbat Ma’rata village (see map), near the key town of Khan Tuman that was reclaimed by the rebel-Nusra advance on Thursday.

Russian and regime warplanes have been carrying out intense airstrikes of the area to support the counter-attack.

Rebels and Jabhat al-Nusra seized the town of Khalidiya as well as Khan Tuman, on the Aleppo-to-Damascus highway; a tank base; an Army fuel depot; and hilltops.

No details were given of the discussion. State news agency SANA posted an account in which Assad denounced foreign-supported terrorism and expressed appreciation for Iranian support.

SANA declared, “The two sides asserted that the counter-terrorism front led by Syria, Iran and Russia constitutes a foundation stone for eradicating terrorism and extremism as well as re-establishing security and stability in Syria and the region.”

Iranian State outlet Press TV quoted Velayati as saying, “[Iran] will mobilize all resources to fight the terrorists that are perpetrating crimes against oppressed nations in the region, regardless of the ridiculous categorization of those terrorists as moderates and extremists.”

On Friday, Velayati reiterated that Iran is backing Assad to remain in office until 2021, completing the rest of his seven-year term from a staged election in June 2014.

Breaking its silence over the battle near Aleppo, Iran’s Revolutionary Guards has acknowledged the deaths of several of its troops in this week’s advance by rebels and the jihadists of Jabhat al-Nusra.

The Guards said “several Iranian advisors” were killed by “Takfiri terrorists”, as the rebel-Nusra offensive captured the town of Khan Tuman near the Aleppo-to-Damascus highway.

Guard spokesman Hossein Ali Rezaie later said 13 troops were killed and 21 injured. All the casualties were from the Guards’ Mazandaran Division

Rezaie was not clear if all the casualties were in the Khan Tuman battles. However, State news agency IRNA cited the location.

Rezaie cautioned Iranians not to be affected by the graphic images of the dead, which he described as “psychological warfare” by the enemy.

Mohammed Balbasi and Reza Hajizadeh, members of #Iran's IRGC killed in #Syria during past days pic.twitter.com/PD4I9Ezra3

The Syrian Pound appears to be in free fall, weakening another 9% in a few days.

The site says, from a money-changer, that just before the halt the Central Bank sold dollars for 540:1 to military personnel and regime-affiliated traders. Those who bought the dollars then sold them at more than 600:1, making a large profit.

The Syrian economy is now largely propped up by external aid from countries such as Russia and Iran. GDP has fallen by about 15% per year since the start of the uprising in March 2011.

Before the uprising, the Pound was at 47:1 vs. the US dollar.

Amid the latest weakening of the economy, the regime reportedly raised bread prices between 25% and 40% last week.

The Syrian opposition says regime forces prevented a UN aid convoy from entering the district of al-Wa’er in Homs city on Thursday.

The 18-truck convoy has 4,000 food baskets and hygiene kits. A second delivery is scheduled for Monday, with two more in two weeks’ time.

Almost 14,000 families live in the district, which has been under besieged for more than three years. In late 2015 aid was finally delivered to the district after a truce.

UN official Jan Egeland said earlier this week that the Assad regime is continuing to block aid to several besieged areas, leading to a sharp reduction in assistance in April.

[The regime] imposes cumbersome procedures that restrict access to healthcare. This is strangulation by red tape. It is violence by bureaucratic means rather than force of arms, but it is just as devastating.

News is still awaited on the extent of the storming of Hama Prison by regime security forces on Friday night.

The forces attacked with tear gas and live ammunition, four days after the facility was taken over by detainees protesting the movement of inmates for execution.

A Syrian opposition official, in contact with the prisoners, said an unidentified gas was fired into the prison, causing 25 cases of suffocation but no deaths. Video and pictures showed fires inside the complex.

Activists and the Syrian opposition warned on Thursday of an imminent “massacre” of the more than 1,200 men inside the prison, as the Assad regime brought in reinforcements after failed attacks earlier in the week.

The Syrian opposition official said the opposition-rebel High Negotiations Committee has informed the US and UN envoy Staffan de Mistura about the situation.

With electricity and water cut off, a detainee collects rainwater:

Footage of security forces, taken by a detainee, before last night’s assault: