On Tuesday morning, Syria’s State media added an important story to its claims of rebel attacks on civilians in regime-held areas of Aleppo city.

For the first time, the outlets proclaimed that a medical facility had been hit, declaring that “terrorist rockets” had struck the al-Dhabeet Maternity Hospital in west Aleppo. Three women had been killed and 17 women and children wounded, said State news agency SANA. Photographs showed damage to the front of the hospital, with windows blown out, and destroyed cars in the street.

But the narrative immediately ran into trouble. Analysts quickly noted that the pictures did not point to a rocket attack but to a vehicle bomb, given that one of the cars had been blown into pieces and that the hospital showed the widespread effects of a bombing rather than the more direct impact of a rocket. Witnesses, including the hospital director, spoke of a “blast” rather than a strike from the air.

So State media shifted the story. By afternoon, it was a shell that had hit a military vehicle, causing an explosion that fit better with the photographs.

Even later, some accounts began speaking of a “missile” that had been fired on the hospital, the first time that the rebels would have carried out that type of attack on a civilian target in Aleppo.

None of this, however, dealt with the problems that the witnesses had not heard the whistle associated with a rocket or missile. Nor did it explain why the car which had been blown apart appeared to be that of a civilian, and not the armed forces.

Perhaps unwittingly, the Assad regime’s outlet had raised the propaganda stakes. Initially, their hope was to take attention away from the surge in Russian and regime airstrikes and missiles that had not only killed more than 250 civilians in and near Aleppo since April, but had destroyed a major hospital, a clinic, a medical warehouse, and a civil defense center.

Those attacks had prompted a UN Security Council session on Tuesday which unanimously called for an end to the attacks and protection of all medical personnel. The regime’s hope may have been to divert attention from itself and onto the “terrorist” rebels, often framed — inaccurately — as the jihadists of Jabhat al-Nusra.

The exposure of a car bomb would not only undermine that effort but raise a bigger PR problem for regime officials. Given the high level of security in the area of the hospital — and given that rebels have never penetrated that security, even if they had sought to do so — the most plausible explanation is that the car was planted in the area. Put bluntly, the Assad regime had staged a “false flag” operation, killing some of the civilians that it claims to protect.

How to escape that possibility? Well, there is always the glimmer that the world’s media will run your original story, even with all its flaws.

And so far the Assad regime has that security, with international outlets — from The New York Times to Reuters — sheltering it with lead paragraphs about rebel “rockets” and “missiles”.

The al-Dhabeet Hospital is well to the south of the area where all the claimed “terrorist rockets” had previously landed in west Aleppo. It is not close to any of the sites that have been named by Syrian State media. It is distant from the current fighting between rebels and regime forces in the northwest of the city. 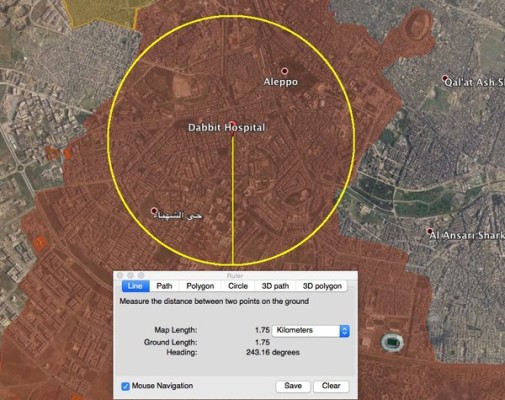 The distance — put at 1.6 km from the closest rebel line — is significant because it places the hospital out of reach of the rebels’ firing positions for “hell cannons” and mortars, blamed for most of the attacks on west Aleppo. The longer-range Grad rocket can travel up to 20 km, but its lack of precision would mean — if it was used — that the hospital was not deliberately targeted.

Moreover, the location of the hospital hinders the possibility of a howitzer, artillery, or tank shell. With all the tall buildings surrounding al-Dhabeet, it would be close to a miracle trajectory for a shell to have caused the supposed impact on the street in front of the hospital.

That leaves the idea of a pinpoint missile strike — the belated explanation by some pro-Assad outlets — but no one has established the likely path of such an attack, especially given that rebel forces have not previously attempted such a launch in the Aleppo battle.

The photographs of the attack clearly showed the destruction of cars in front of the hospital. 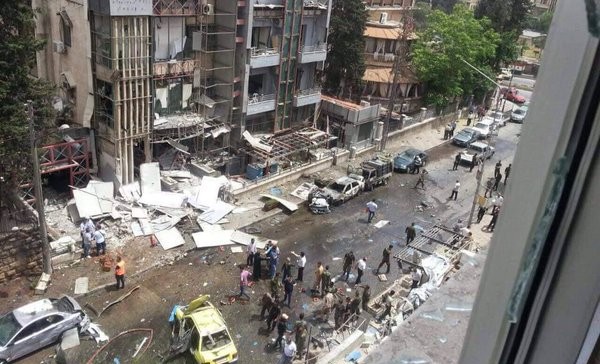 A closer look identifies one vehicle which appears to have been blown apart from the inside, not from an external strike: 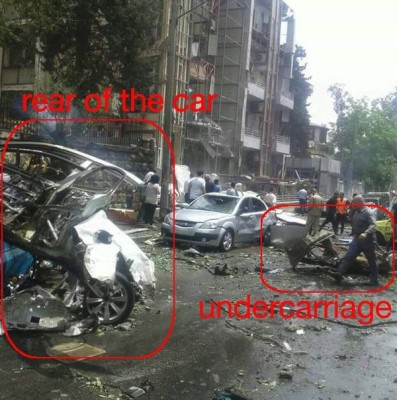 And another Russian outlet, ANNA News, features an outpatient who speaks (2:48 mark) of a “big bomb”, matching the account of the hospital’s director and other witnesses:

Both photographs and video also show the damage across the hospital, including shattered windows and pockmarked faced, pointing to the widespread impact associated with a car bomb.

So far there has been no evidence of any canister associated with a rocket.

Witnesses at the site claimed that Syrian intelligence officers quickly moved into the area after the blast, not only securing the area but setting up the “rockets” explanation. State media immediately put out the story of 3 dead and injured, and some accomplices — such as Murad Gazdiev of Russia’s RT — went farther with inflated casualty figures:

State news agency SANA did not go as far as to put out the “two dozen” number, and it soon faced pressure over the photographs challenging the rocket narrative. So the line changed to the “missile on a military vehicle”.

However, when even that proved difficult, SANA reverted to the vague “terrorist organizations’ attacks”, although the Foreign Ministry wrote letters to the UN which continued to declared that “terrorists fired large rocket shells”, and SANA’s brief update on Wednesday referred to “rocket shells”.

Given all the questions around the attack and the inconsistencies in State media, one might have expected some caution in international coverage of the incident.

But, fortunately for the Assad regime, there has been no scrutiny. Reuters is blunt: “Rebel fighters…fired rockets on a hospital.” Al Jazeera follows with “a rebel rocket attack”.

Anne Barnard of The New York Times, one of the best correspondents on Syria, is more cautious; however, she fails to pick up on the significance of the images challenging the official narrative: “Insurgent shelling hit a maternity hospital in the government-held section of the Syrian city of Aleppo on Tuesday, according to state media and footage from the scene.”

And The Washington Post, rather than pausing for a careful settlement, runs a banner headline: “Rebel Shelling Hits Aleppo Hospital Amid Cease-Fire Efforts”. It asserts in the lead paragraph:

A Syrian rebel assault on government-held parts of Aleppo killed as many as 19 people, activists and Syrian state media said Tuesday, in attacks that included a deadly rocket strike on a hospital.

Part of the challenge is that journalists are unable to get into regime district of Aleppo to verify stories. Declan Walsh of The New York Times finally was able last week to enter the area to carry out some interviews, but he departed for Damascus before Tuesday’s events.

But part of the media’s difficulty is self-imposed, with reliance on limited and far-from-reliable channels. Reuters, for example, draws almost all their information — not just on Aleppo but on developments across Syria — from the Syrian Observatory for Human Rights, the organization founded by a Syrian shopkeeper in Britain which often recycles chatter as confirmed facts. In turn, Al Jazeera relies on Reuters for much of their output, and The Huffington Post reprints the Reuters article under the headline, “Aleppo Hospital Hit By Rebel Rockets“. Other outlets, as in Tuesday’s case, are dependent on transmitting whatever claim is circulated by Syrian State media.

But perhaps the biggest challenge is just asking questions, rather than printing without critique. Given the demand to publish quickly, combined with the difficulty of a complex situation, the easiest option is to put out the narrative as confirmed.

And, of course, that is what the Assad regime will have known going into Tuesday. It does not want questions asked. It wants questions deflected — notably over the Russian-regime attacks in and near Aleppo on civilian targets, including on medical facilities. It wants to change the narrative, as it tries to hold out against meaningful political transition, especially one that puts President Assad at risk of a future trial.

The media is still citing last week’s Russian-regime assaults that killed doctors, rescuers, patients, and other civilians, but today it is almost always coupling this with the supposed tragic “balance” of the al-Dhabeet incident.

Soon — at least until the next Russian-regime attack that leaves scores dead at a medical facility which is supposed about the saving of lives — all the incidents will disappear.