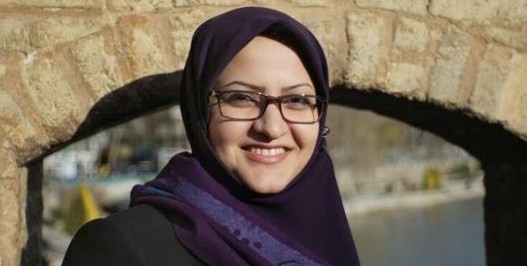 PHOTO: Lawyer Minoo Khaleghi, elected to Parliament in February but barred from taking her seat

The case of the banned MP Minoo Khaleghi, which is threatening a wider political battle within Iran’s regime, took another turn on Tuesday as she was summoned to court.

Khaleghi, a reformist who is a lawyer and activist, won a Parliamentary seat on February 26 when she finished third in the city of Esfahan. However, the Guardian Council, the 12-member body which supervises elections, subsequently declared that she was not qualified to be an MP.

Critics of the ban, including President Rouhani, have said that the Council — which banned thousands of candidates before February 26 in an unsuccessful attempt to check a centrist-reformist bloc — does not have the power to ban MPs after they have been elected.

Former President Hashemi Rafsanjani, an ally of Rouhani, has accused the Council of “bad manners” and said that it cannot be allowed to block the will of the people. Prominent MP Ali Motahari wrote an open letter last week to the Council head, Ayatollah Ahmad Jannati, to insist on Knaleghi’s reinstatement.

But on Sunday the Tehran Prosecutor General, Abbas Jafari Doulatabadi, said that Khaleghi has been summoned to court to explain photographs, circulating on-line, in which she is not wearing the hijab, the mandatory head covering for women in Iran.

Reports have indicated that the Council banned Khaleghi over the pictures, allegedly taken while Khaleghi was travelling in Europe and China. The lawyer has denied that the pictures are of her, while a journalist has been arrested for disseminating the images.

While effectively supporting the reason for the MP’s ban, Doulatabadi denied any political motive, “The Tehran court’s actions against this criminal behavior are neither to oppose the government nor to support the individual who shared the images with others.”

The Khaleghi case has wider significance because of President Rouhani’s campaign, begun last year, to limit the powers of the Guardian Council. The President questioned the authority of the Council to disqualify candidates and said it should be an advisory body.

The Supreme Leader intervened to check the criticism, and the Council pursued its mass purge of candidates for Parliament and the Assembly of Experts, the group which chooses the Leader. However, centrists and reformists formed a List of Hope which won unexpected victories in the ballot, with the outcome that no faction has a majority in Parliament.

After the vote, Rouhani has again suggested that the Council should be restrained in its claimed powers.

Crackdown on Women Without Headscarves

Doulatabadi also announced another crackdown on women failing to wear the hijab.

The prosecutor said that eight women had been arrested for modelling on-line without covering their heads.

A blogger who manages the publishing tool Perisan Blog was also detained, and a former model was questioned live on State TV on Sunday.

The former model, 26-year-old Elham Arab, had posted pictures of herself on Instagram sporting dyed-blond hair and wearing bridal gowns. On television, she spoke of “bitter experiences” and warned young women to think twice before posting pictures of themselves online: “You can be certain that no man would want to marry a model whose fame has come by losing her honor.”

Doulatabadi declared, “The enemy is investing in order to create a generation without any willpower. We must refrain from any actions that run counter to the values of the establishment.”

The renewed crackdown is a challenge to Rouhani, who has long called for relaxation of punishment and prison terms over social behavior: “We cannot take people to heaven by force and with a whip.”

Iranian officials are continuing to complain that European banks are blocking transactions, four months after implementation of the July 2015 nuclear deal.

Deputy Foreign Minister Majid Takht-e Ravanchi said at an Iranian-Italian meeting in Tehran on Monday that “conservatism among large European banks” is hindering “the required cooperation” in the banking sector.

Iranian officials, including the Supreme Leader, have blamed the US for obstructing transactions, through threats of sanctions on any European bank or business dealing with Tehran.

US Secretary of State John Kerry has said that, while Iran cannot get access to the US financial sector, European entities can deal with any Iranian entity that is not on a sanctions list. Last week, Kerry met British and European officials to discuss the issue.

However, Ravanchi said on Monday, “We are not fully satisfied with the implementation of the JCPOA because the US government has not fully carried out its responsibilities in relation to the agreement.”

He denied that European banks had set preconditions for resuming operations, “It is nonsensical to talk about guarantees in banking transactions.”

The conservative newspaper Javan had reported that the European banks had asked for $15 billion to cover past US penalties.

Indian officials said yesterday, ahead of Prime Minister Narendra Modi’s trip to Tehran next week, that New Delhi is still having problems paying off a $6.5 billion debt — most of it accrued over oil transactions — because of concerns over the US position.

“We are trying our best to conclude the agreement during the week,” an official said. “We would have liked to transfer at least some part of our outstanding dues to Iran before the PM’s historic visit.”