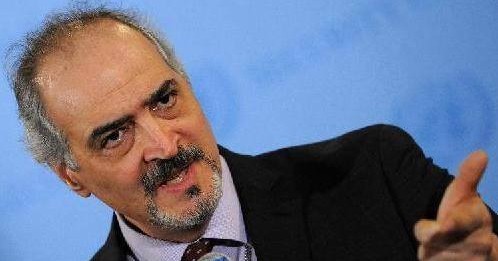 Interview: “Holding On to Some Hope” for the Negotiations

UPDATE 1300 GMT: Russia has warned that it will respond unilaterally to ceasefire violations in Syria, beginning Tuesday, if the US refuses to coordinate rules of engagement against the violators.

Lieutenant General Sergei Rudskoy of the Russian General Staff said the US, in talks with Moscow last week, had refused to coordinate a joint response: “The American side was not ready for this particular discussion and for the approval of the agreement.”

An American official in Geneva responded:

We have seen the media reports on alleged Russian concerns over cease-fire violations. Whoever is making such statements must be misinformed, because these issues have been discussed at length already, and continue to be discussed, in a constructive manner.

Russian officials and State media have been asserting on a daily basis, without substantiation, that scores of civilians have been killed by rebel forces in ceasefire violations. A Russian general said this weekend that further delays in coordination have caused casualties, such as in the divided city of Aleppo where he claimed 67 civilians have died since the cessation of hostilities on February 27.

De Mistura carefully said of the discussions, which were renewed last Monday in Geneva:

The government is currently focusing very much on principles, which are necessary in any type of common ground on the transition.

But I hope next week, and I have been saying so to them, that we will get their opinion, their details on how they see the political transition taking place.

He said the regime group could not avoid substantive questions forever.

On Friday, the delegation, led by UN Ambassador Bashar al-Jaafari, presented a document titled “Basic Elements for a Political Solution” to de Mistura. Officials and diplomats said the text was “very thin”, “bland”, and “off the point”: while mentioning a secular state, territorial integrity, and the fight against terrorism, the elements said nothing about a political transition.

Even before the talks began, the regime ruled out any discussion of President Assad’s future, and Jaafari has maintained the line over the past week.

He will spend every minute questioning the nature of the opposition, quibbling about the font in the agenda.

Another diplomat said that, despite the regime’s tactics, this set of talks will not be sidetracked like previous negotiations, including a short-lived effort last month at “proximity talks” between Assad’s representative and the opposition-rebel High Negotiations Committee:

De Mistura is dragging the regime in with his queries on their position paper, rather than allowing them to talk about what they want.

The regime had in the past a bit of space to play and to maneuver. The regime knows it has to come and stay but is not prepared for the idea that it has to engage the opposition.

Opposition: We Will Decide This Weekend Whether to Continue

The lead opposition-rebel negotiator, Mohammad Alloush, said that the group will decide at the end of the week whether to continue talks.

Alloush said little progress was made in the first week of negotiations and many pitfalls lie ahead:

We can…assess all the answers and assess the round of talks in general and the whole world can then see clearly who is procrastinating and who is putting obstacles in the way.

Alloush repeated that the opposition cannot accept Assad as part of a transitional governing authority, and that “those with blood on their hands can have no part in a reconstituted Syrian army”.

A Russian missile killed 17 Syrian Army troops near Palmyra on Monday morning, according to a pro-regime website.

Al-Masdar News, citing a “battlefield correspondent”, said 26 soldiers were wounded when the marines were in a battle with the Islamic State. Among the dead were the unit’s commander.

The Syrian Army and allied forces including Hezbollah, assisted by Russian airstrikes, have been attacking ISIS near Palmyra, a Roman-era city in Homs Province, for weeks. The Islamic State took control of the area in May 2015.

Photo: Looking Upon the Devastation in Darayya

Looking upon the devastated town of Darayya, southwest of Damascus, which has been bombarded and besieged by the Syrian military and its allies since autumn 2012: 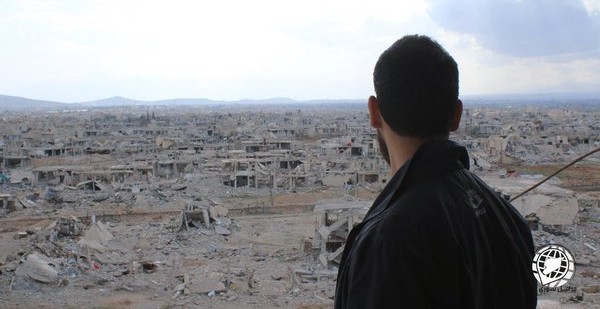