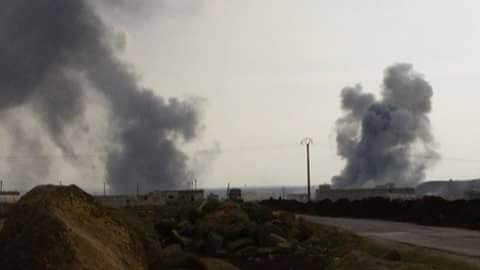 UPDATE 1730 GMT: The co-chair of the Syrian Kurdish Democratic Union Party (PYD) has said that its YPG militia will not withdraw from opposition territory which it has captured this month, despite the start of Turkish shelling on the positions.

Salih Muslim said Turkey had no right to intervene in Syria’s internal affairs and asked about the Menagh airbase, taken by the YPG on Tuesday, “Do they want the Nusra Front to stay there, or for the regime to come and occupy it?”

He warned that, if Turkey continued its operations, it would find “the entire Syrian people confronting them”.

Meanwhile, the YPG spokesman in the Efrin canton, from where attacks are being launched on rebels, has denied any collaboration with the Assad regime, but said, “[We] support any faction that could give Kurds a political role.”

Turkish artillery shelled the YPG which has been seizing opposition territory in northern Aleppo Province this month, in the Menagh airbase and near the town of Azaz on the border.

Ankara’s military officials said the shelling was in response to attacks by the YPG and Syrian regime forces on a Turkish military base and a police station. The artillery not only targeted the YPG but the dissident rebel faction Jaish al-Thuwar, part of the YPG-led Syrian Democratic Forces.

Turkish Prime Minister Ahmet Davutoğlu said that the shelling was under the rules of engagement after the YPG had fired on the base and police station. He claimed that the Kurdish militia is pursuing “ethnic cleansing” against Arabs and Turkmens, in cooperation with the Assad regime, and demanded that it immediately leave areas near Azaz.

Davutoğlu also said he received a phone call from US Vice President Joe Biden after the recent developments. The Prime Minister said he told Biden that Turkey sees the YPG, the Syrian Democratic Union Party (PYD), and the Turkish Kurdish insurgency PKK as “terrorist groups” and will take “necessary steps”.

Biden replied by citing “US efforts to discourage Syrian Kurdish forces from exploiting current circumstances to seize additional territory near the Turkish border”, and urging “Turkey to show reciprocal restraint by ceasing artillery strikes in the area”.

The Vice President “expressed support for Turkey’s fight against PKK terrorism”, without apparently noting Ankara’s contention that the PKK is the leading force in the Syrian PYD.

As the rebels have faced Russian airstrikes and a regime-Iranian-Hezbollah offensive north of Aleppo city, the YPG has taken advantage with an advance from the Kurdish canton of Efrin. It seized a series of villages and the border town of Deir Jawad before moving into Menagh Airbase, held by rebels since 2013, earlier this week. On Friday, the Kurdish militia attacked rebel positions in Azaz, a key town for the movement of men and supplies.

Despite the Turkish intervention, the YPG continued attacks on Saturday, launching an assault on the town of Tal Rifaat. Rebels claimed they repelled the Kurdish force, killing 40 troops.

Turkish Deputy Prime Minister Yalçın Akdoğan said on Sunday that the attack on Tal Rifaat poses a security threat, as it could spur tens of thousands of people to seek refuge in Turkey.

Claimed footage of one of the Russian airstrikes:

Turkey believes the Syrian Kurdish party PYD is led by the Turkish Kurdish insurgency PKK, which has waged an armed campaign for more than 30 years against Ankara. However, the US has steadily increased support to the YPG and other Kurdish units since the Islamic State’s offensive of autumn 2014 in northeastern Syria, checked by the defense of the Kurdish center of Kobane in January 2015.

Last October, the Americans switched support from Syrian rebels to the newly-created Syrian Democratic Forces, led by the YPG with some Arab and Assyrian units. Washington has provided arms, ammunition, and special forces as the Kurds have pushed back the Islamic State across northeast Syria.

Some Kurdish officials are calling for the territorial unity of Syrian Kurdistan (Rojava), connecting the Afrin canton in northwest Syria with those of Kobane and Cezire in the northeast.

Meanwhile, Turkish Foreign Minister Mevlüt Çavuşoğlu damped down his earlier statement that Turkey and Saudi Arabia could pursue ground operations in Syria against the Islamic State.

After a series of meetings between Turkish and Saudi officials, Riyadh is moving 20 warplanes and troops to the Incirlik airbase in southern Turkey.

Early Saturday, Çavuşoğlu was quoted as envisaged the entry of troops to support aerial operation: “At every coalition meeting we have always emphasized the need for an extensive result-oriented strategy in the fight against the Daesh [Islamic State] terrorist group.”

However, later in the day, he passed the issue to the US-led coalition carrying out airstrikes against ISIS since September 2014:

This is not an issue for Turkey or Saudi Arabia alone, we have been saying that the coalition should be doing this….

There is no solid decision on this, no concrete strategy. This is not a new idea, but as of today, there is no decision regarding a ground operation.

The White House has issued a brief statement on a phone call by President Obama to Russian counterpart Vladimir Putin on Sunday, “In particular, President Obama emphasized the importance now of Russia playing a constructive role by ceasing its air campaign against moderate opposition forces in Syria.”

The Kremlin said of the “frank and constructive” discussion that Putin had emphasized the rejection of “double standards” in a “unified anti-terrorism front”:

In particular, the President of Russia noted the need to organize close working contacts between the Russian Defence Ministry and the US Department of Defence, which would make it possible to combat ISIS [the Islamic State] and other terrorist organisations in more effective and better-planned fashion.

Video: Close-Up Footage of Bombing of Darayya Near Damascus

Close-up footage of a helicopter’s bombing of Darayya, southwest of Damascus:

The Assad regime has been trying to take the town, held by rebels since 2012.

Video: Jaish al-Islam Documentary of Its Advances in 2015

The leading rebel faction Jaish al-Islam has posteded a 60-minute documentary of its gains in 2015 against regime forces north of Damascus, particularly along the highway from the capital to Homs.

Jaish al-Islam took territory across the Qalamoun region, while withstanding constant regime bombardment of the Damascus suburbs, particularly its base in Douma. Fighting is continuing for control of the Damascus-to-Homs highway, with Russian airstrikes supporting the regime’s attacks.

The release of the video may be motivated in part to show the resilience of the faction, whose leader Zahran Alloush was killed in an airstrike on December 25.

In its latest analysis of Russia’s bombing in Aleppo Province, enabling regime-Iranian-Hezbollah offensives, the Institute for the Study of War concludes:

Russia obscures its true intentions in Syria through an active disinformation campaign. Its primary objective in Syria is to maintain an air and naval base on the Mediterranean by ensuring the preservation of the Assad regime.

The distribution of Russian airstrikes in Aleppo Province demonstrates that its air campaign is primarily directed at weakening the armed Syrian opposition generally, not ISIS [the Islamic State] or al Qaeda affiliate Jabhat al-Nusra.

The “cessation of hostilities” agreed upon the International Syria Support Group (ISSG) on February 11 will likely only further the regime’s campaign to complete the siege of Aleppo, which Russia has been setting conditions for since October 2015. 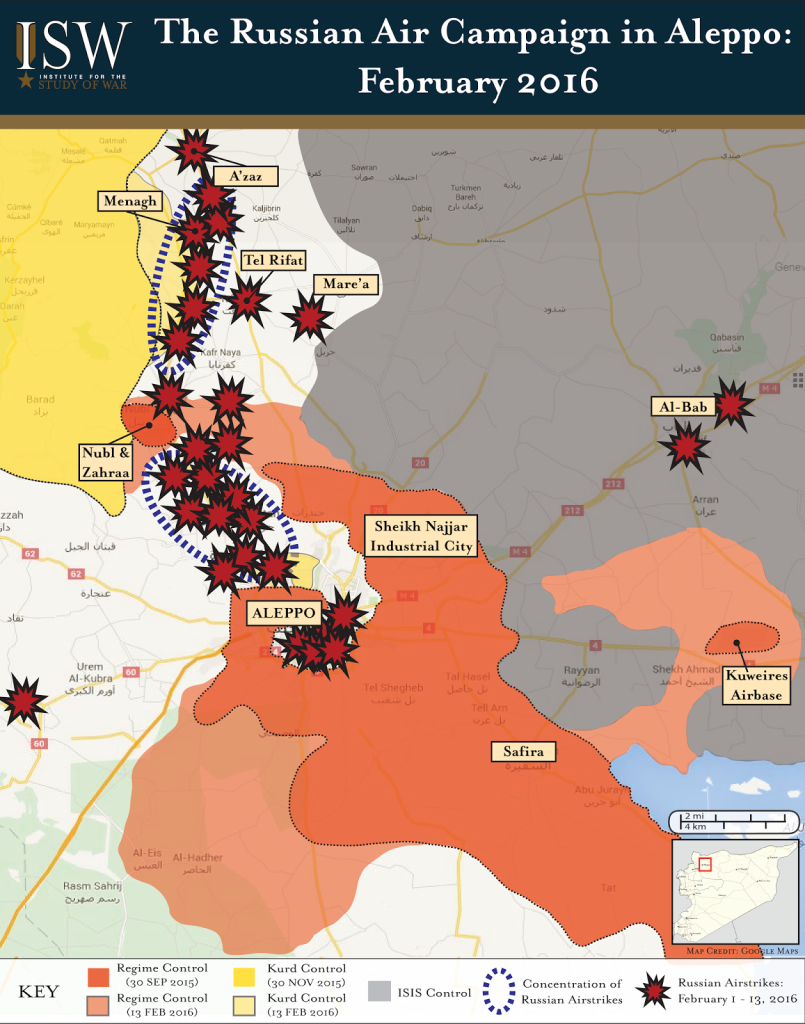