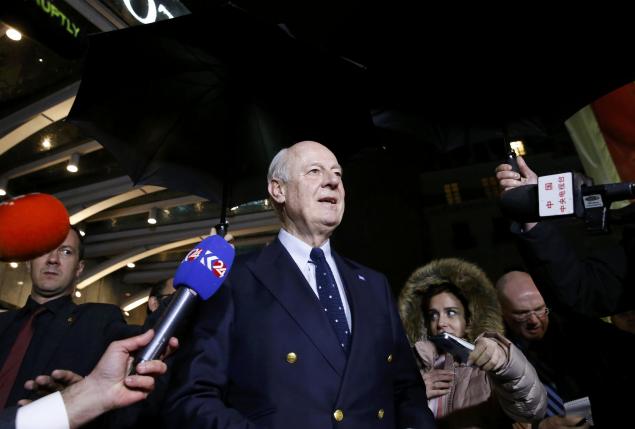 Talks in Geneva to resolve Syria’s 5-year conflict collapsed on Wednesday, even before they began, with UN envoy Staffan de Mistura announcing a suspension until February 25.

The envoy said, “I have concluded frankly that after the first week of preparatory talks there is more work to be done, not only by us but by the stakeholders.”

De Mistura had announced on Monday that talks had “begun” with his separate meetings with the regime’s delegation and the opposition-rebel Higher Negotiations Committee.

However, the head of the regime delegation, the UN Ambassador Bashar al-Ja’afari — who had already said there would be no concessions — pointedly rejected that view and refused to even acknowledge the opposition-rebel bloc: “I couldn’t tell you much about what’s going on because we are waiting for Godot, and Godot hasn’t come yet.”

The opposition-rebel HNC insisted on discussions to implement ceasefires and access to aid for besieged areas. It noted that Russia and the regime had escalated bombing, killing hundreds of civilians as well as fighters, since the formal start of the conference last Friday.

A “senior UN official” also said Russian bombing was the main reason for the halt to discussions:

I think the special envoy decided to suspend the talks because the [UN] did not want to be associated with the Russian escalation in Syria, which risks undermining the talks completely.

The stepped up air strikes gain the government ground, but also aim at humiliating the opposition on the ground and in Geneva.

The Russian attacks accompanied a regime offensive, led by Hezbollah and foreign militias, that advanced north of Aleppo. On Wednesday, the troops reached the regime enclaves of Nubl and al-Zahraa, surrounded by rebels since 2012.

Opposition: No Return to Geneva Without Ceasefires

Riad Hijab, the coordinator of the HNC, said the delegation would not come back to Geneva until there was an end to airstrikes. He added, “The opposition will only talk about a ceasefire when there is a political transition that does not involve Bashar al-Assad.”

Speaking after de Mistura’s announcement, Riyad Hijab, the HNC head who joined the opposition team in Geneva just hours earlier, announced that the delegation would leave and not come back until there was a change on the ground and an end to ongoing air strikes.

“The opposition will only talk about a ceasefire when there is a political transition that does not involve [Syrian President] Bashar al-Assad,” he said.

Even before de Mistura’s announcement, Russia prepared for the suspension by trying to lay blame on the opposition-rebel bloc. At the same, Foreign Minister Sergei Lavrov made clear that bombing would not be halted: “I don’t see why these air strikes should be stopped….[They] will not cease until we truly win over terrorist groups.”

US Secretary of State John Kerry responded with a challenge to both Moscow and the Assad regime:

The continued assault by Syrian regime forces — enabled by Russian airstrikes — against opposition-held areas, as well as regime and allied militias’ continued besiegement of hundreds of thousands of civilians, have clearly signaled the intention to seek a military solution rather than enable a political one….

It is past time for them to meet existing obligations and restore the international community’s confidence in their intentions of supporting a peaceful resolution to the Syrian crisis.

In an environment where children are still being killed, such attempts do not have any function apart from making things easier for the tyrant.

They always convene, get together, eat, drink and then leave. Now they are giving a date for end-February. Let’s watch. You will see that once it is Feb. 28 they will postpone again.

Journalist Rami Jarrah on the tactics of the Russian airstrikes and the effects on civilian areas:

Aftermath of an Russian airstrike on the al-Mashad section of Aleppo city on Thursday:

Activists says scores of people were killed in the attacks on opposition-held areas in the city and in areas to the north.

Searching for survivors in rubble in the al-Sha’ar district:

Countries Pledge $11 Billion in Aid to Syrians By 2020

Delegations at an international conference in London have pledged $11 billion in aid to Syrians by 2020.

The “Supporting Syria” conference was held as up to 70,000 more people were moving towards the Turkish border, fleeing from a regime-Russian-Hezbollah offensive in northern Aleppo Province.

British Prime Minister David Cameron said donors had pledged a total of $6 billion (£4.1 billion) for Syrians for 2016, and a further $5 billion to be spent by 2020.

UN agencies are appealing for $7.73 billion for this year, and governments of Syria’s neighbors such as Lebanon and Jordan are asking for an additional $1.2 billion for their national response plans.

Amnesty Official: US “Complicity” With Russia

Kristyan Benedict, Amnesty International’s campaign manager in Britain, casts doubt on the extent of US criticism of Russia for the undermining of the Geneva talks.

Michael Ratney, the White House’s special envoy for Syria, said in a statement on Thursday that it was “difficult in the extreme to see how strikes against civilian targets contribute in any way to the peace process”:

The Syrian people want an end to the violence and destruction that has plagued their country for five years. So do we. So does the international community.

However, Benedict notes the lack of any proposed action by Washington to deal with the Russian tactics:

#Syria: US on Putin & Assad sabotaging Geneva talks. No deadlines. No punishments. No actions. Looks like complicity pic.twitter.com/lfICzzkAN0

Rebels say that a Russian officer has been killed by an anti-tank missile in northern Latakia Province.

The rebels said Russian officers were commanding a patrol in a Turkmen area, where regime forces have been trying to advance close to the Turkish border, when the missile hit the building where they were gathered.

The rebels said Syrian officers, including a senior commander, were also slain.

The local council in Moadamiya, the Damascus suburb besieged by the Syrian military since late 2012, has accused the UN of turning a “blind eye” to the blockade.

The council said in a statement on Wednesday that the UN was “ignoring the suffering” of civilians and not intervening until people were at “the brink of death”.

On Wednesday, the Red Cross said 12 trucks with aid were sent into Moadamiya. However, activists said the assistance only reached sections of the town with regime supporters:

State media coverage of the distribution:

The council supported the claim, saying that the majority of UN assistance has been delivered to a neighborhood with a largely-Alawite population on the eastern edge of Moadamiya. It added that the area is under the Syrian military’s control, forcing most of the town’s resident to travel 2 to 3 km and try to obtain aid parcels and “putting them in direct danger”.

The council called on the UN to send future deliveries to the Town Hall. It said seven people had died of starvation in the last few days and warned of a “humanitarian disaster” without a change in the situation.

Despite a ceasefire in January 2014, following a winter in which scores of residents died of malnutrition, the Syrian military has continued to cut off food and supplies.