UPDATE 1750 GMT: The head of the regime delegation, Syria’s UN Ambassador Bashar al-Ja’afari has reiterated that little progress has been made in the Geneva talks.

“It seems the first phase of preparations will take a much longer time than expected,” Ja’afari said on Wednesday. “The official discussions did not take off yet unfortunately. We are still discussing how to proceed.”

Ja’afari attempted again to discredit the opposition-rebel negotiating team by saying that he did not recognize an organized group: “I couldn’t tell you much about what’s going on because we are waiting for Godot, and Godot hasn’t come yet.”

UPDATE 1700 GMT: State news agency SANA claims that foreign militias and the Syrian military have reached the regime enclaves of Nubl and al-Zahraa, north of Aleppo city, for the first time in three years.

This week’s offensive, led by Hezbollah and including Iraqi militias with the support of intense Russian bombing, had captured a series of villages in the advance towards the enclaves.

Claimed video of entry into the enclaves:

The first moments of breaking the siege of #Zahraa and #Nubbol in Northern #Aleppo https://t.co/xbSRvJxQDU pic.twitter.com/AfrluQdCwc

Claimed footage of fighting in the area:

UPDATE 1330 GMT: Mohammad Alloush, of the High Negotiations Committee and the rebel faction Jaish al-Islam, has firmly rejected any proposal of a “unity government” in the Geneva talks: “Whoever wants us to go into a unity government with these thugs who kill children is delusional.”

Alloush also challenged any inclusion of the Syrian Kurdish Democratic Union Party (PYD) in the discussions, “We consider forces like the PYD to be a branch of the regime.”

UPDATE 1300 GMT: Russia’s Foreign Ministry Sergei Lavrov has rejected any halt to Moscow’s bombing of opposition areas, labeling rebels as “terrorists”, despite the effect on the Geneva talks: “Russian airstrikes will not cease until we truly win over terrorist groups: Daesh, Jabhat al-Nusra [banned in Russia] and such. I see no reason to stop these airstrikes.”

The opposition-rebel bloc in the Geneva talks pointed to a withdrawal by Friday, as there was no advance towards ceasefires, detainee releases, and access to aid for besieged areas.
‘
The head of the regime delegation, Bashar al-Ja’afari, said on Tuesday morning after two hours of talks with UN Staffan de Mistura, “We are in the preparatory stage before the official launch of indirect negotiations.”

Ja’afari’s statement pushed back de Mistura’s assertion, following his initial, separate discussions on Monday with the regime and opposition-rebel groups, that “official talks” had begun. Meanwhile, the regime’s ally Russia threw up another barrier, with Foreign Minister Sergei Lavrov saying that the rebel faction Jaish al-Islam could not be a part of the opposition delegation

Ja’afari insisted, “We don’t know until this moment who the other delegations that are supposed to represent the Syrian opposition.”

The opposition-rebel High Negotiations Committee did not attend a scheduled meeting with de Mistura on Tuesday afternoon. Instead, they gathered outside the UN offices in Geneva to protest “unprecedented” bombing by Russian warplanes supporting “a massive acceleration” of attacks by foreign militias and regime forces on areas around Homs and Aleppo.

In a written statement, the HNC repeated that its goal was “to ensure the immediate implementation” of December’s UN Security Council resolution for ceasefires and an end to sieges, “before the start of negotiations”.

At the protest outside the UN offices, Hind Kabawat said, “We’ve never seen anything like this,” while Farah Atassi declared:

The targets, as always, are overwhelmingly civilians. The regime’s and Russia’s actions gravely threaten the political process.

Atassi said international action is needed “to ensure the credibility of this process”.

Russia understands the importance of reaching a ceasefire. But it will not be applicable to terrorists….Russia will continue its assistance to the Syrian government in the fight against terrorists.

At the start of the week, Russia stepping up bombing on areas north of Aleppo. On Monday, regime forces and Iraqi militias moved into two villages as rebel commanders warned that they were outnumbered by the influx of foreign fighters, airlifted on several flights each day from regime bases.

Yesterday the offensive moved into the village of Hardatnin. Russia also bombarded Anadan, Hreitan, Hayan, and Bayanoun, as residents fled towards the border. The opposition Local Coordination Committees documented the deaths of 28 people, and said more were still under rubble.

Civilians run from a Russian attack: 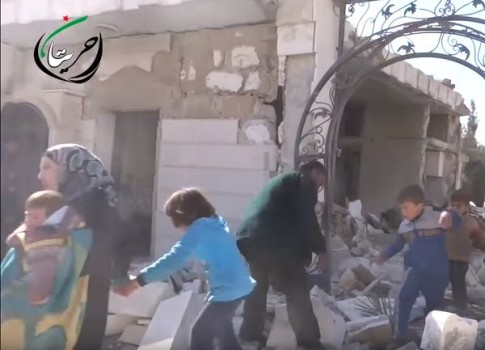 The offensive is threatening supply lines between the Turkish border and Aleppo city, which has been divided since rebels occupied eastern districts in July 2012. It may also try to break through to the regime enclaves of Nubl and al-Zahraa, long surrounded by rebel forces.

One rebel commander, Abu Yasine, said, “The supply routes were not cut but there is heavy bombardment of them by the jets. The Russian jets are trying to hit headquarters and cut supply routes.”

Ahmed al-Seoud, the head of the Free Syrian Army’s Division 13, said, “We sent new fighters this morning, we sent heavier equipment there. It seems it will be a decisive battle in the north, God willing.”

Russian warplanes are also continuing intense attacks on Damascus suburbs — including the beseiged town of Moadamiya, where doctors said 11 people have been killed and more than 170 wounded in recent days — and in Daraa Province in southern Syria.

Everything we are doing is being undermined by the Russians….[They are] posing as the co-sponsors of the political process, and at the same time bombing the people who we believe are the future of Syria.

A child is rescued from a destroyed home in Hreitan, north of Aleppo city:

A doctor and a 10-year-old patient were killed. Four staff and 20 patients were wounded.

Residents in northern Aleppo must now travel 50km (31 miles) north to clinics along the Turkish border.

The Red Cross says an aid convoy with food, medicine, and medical equipment is expected in besieged Moadamiyah, southwest of Damascus, on Wednesday.

Red Cross official Pawel Krzysiek said 12 trucks are en route to the town, cut off by the Syrian military since late 2012.

A ceasefire was arranged in early 2014 after scores of people died of starvation, but the regime continued to restrict access and to periodically attack the town. Bombing has escalated in recent days, with doctors saying at least 11 people were killed and 170 wounded.

On Tuesday, Krzysiek said 14 trucks of aid were delivered to the besieged opposition suburb of al-Tal.

The opposition-rebel bloc at the Geneva talks said the aid was too little, dismissing the deliveries as an empty gesture and demanding an end to the bombing of civilians.

45 Rebel Factions: “We Will Not Bombard Civilians or Use Hunger Against Them”

In a written statement, 45 rebel factions have said, “We assure our full commitment not to use hunger against civilians and not to bombard them or target them as a tool of war.”

The factions also emphasized that they opposed blockades, saying they have only pursued “strictly military sieges”. They promised to continue access to international aid convoys.

The groups said that — in contrast to the deaths of up to 75 people in the town of Madaya, cut off by Hezbollah and the Syrian military for almost seven months — there are no credible reports of famine or shortages in the regime enclaves of al-Fu’ah and Kafraya in northwest Syria, long surrounded by rebel forces.