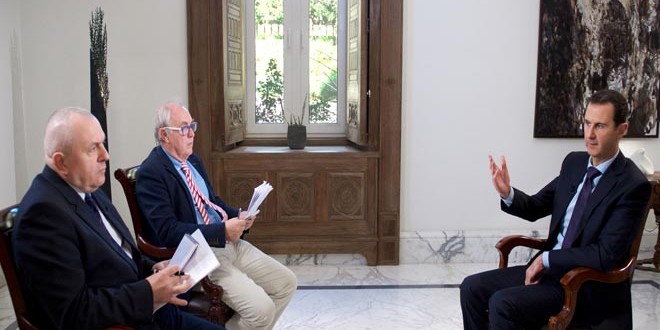 Rebels Get Some Badly-Needed Rockets — But No Launchers
Saudi Moves Jets to Turkey; Foreign Minister Says “Assad is Finished”
Assad Interview — “I Am Protecting the Country”
Analysis: It’s Not a “Ceasefire” — It’s Cover for the US and Russia

UPDATE 2045 GMT: The Kurdish militia YPG is reportedly attacking the opposition-held village of Tal Rifaat, with rebels bringing in reinforcements to hold the area.

Fighting around TelRifat between Kurdish YPG/SDF &rebels. Many groups on rebel side so I prepared this list. @akhbar pic.twitter.com/vCxfCToteQ

DEVELOPING 1545 GMT: Turkish artillery have begun shelling the Kurdish militia YPG in the Menagh airbase and near the town of Azaz in northern Aleppo Province.

Both Turkish pro-Government media and an account linked to the Syrian Kurdish Democratic Union Party (PYD) said the base is being attacked.

A spokesman for the dissident rebel faction Jaish al-Thuwar, part of the YPG-led Syrian Democratic Forces, said it is also being shelled.

Turkish “military sources” said the shelling was in response to attacks by the YPG and Syrian regime forces on a Turkish military base and a police station.

The YPG moved into Menagh, held by rebels since 2013, earlier this week. On Friday, it attacked rebel positions in Azaz, a key town for the movement of men and supplies.

ORIGINAL ENTRY: Undermining an international proposal for a cessation of hostilities, Syria’s President Assad has declared that his regime will regain control of the entire country, and that he will never negotiate with an opposition-rebel bloc.

Assad was speaking to AFP on Thursday, hours before the International Syria Support Group set out its plan:

Q: Do you think, Mr. President, that you can regain control over all Syrian territory? And what is the timeframe you have for that now?

President Assad: Regardless of whether we can do that or not, this is a goal we are seeking to achieve without any hesitation. It makes no sense for us to say that we will give up any part….

Suppose that the problem is purely Syrian, i.e. that Syria is isolated from its surroundings, we can put an end to this problem in less than a year by moving on two fronts: fighting terrorism and political action. The second scenario – which is the case now – taking the shape of continuing supplies to terrorists through Turkey, Jordan, and partly from Iraq – because Daesh [the Islamic State] exists in Iraq with Saudi, Turkish, and Qatari support.

[This] naturally means that the solution will take a long time and will incur a heavy price.

Assad avoided the question of whether he would support an end to bombardment and to sieges on civilian areas:

The general rule is that there are innocent victims in every war. This is a rule of thumb in wars, but this is definitely not the Syrian state’s policy.

The President gave a muddled answer to whether he made any distinction between rebels on the one side and the Islamic State and the jihadists of Jabhat al-Nusra on the other, but did assert, “The state will confront all those who carry weapons.”

However, he was clearer in saying that the regime will never negotiate with the opposition-rebel bloc that was established in December in Saudi Arabia, even though “proximity talks” are the goal of the UN and the international community:

It is only natural for the representatives of Saudi Arabia to be terrorists, not politicians….

Any persons calling themselves opposition but belong to foreign states or foreign intelligence services do not represent Syrians in the dialogue, and simply we do not consider them Syrian.

The first round of Geneva talks was suspended last week after less than five days, as Russia continued bombing in support of regime-Iranian-Hezbollah ground offensives. UN envoy Staffan de Mistura set the goal of a resumption of discussions, hoping to bring together the regime and the opposition-rebel bloc, on February 25.

The US responded on Friday through a statement by State Department spokesman Mark Toner:

He’s deluded if he thinks that there’s a military solution to the conflict in Syria.

All we’re looking at — if the Syrian regime continues the fighting – is more bloodshed, more hardship and, frankly, a greater hardening of positions on either side.

Video: Kafranbel Protesters on Those Who “Know Nothing About Humanity”

Protesters in Kafranbel in northwest Syria rebuke the international gathering in Munich this week, despite its claim of a proposal for a “cessation of hostilities”:

Video: Kerry to Opposition TV “No Peace in Syria with Assad”

Kerry’s lines are his standard rhetoric, such as “It’s important to get back to the table” and “The war cannot end without a political settlement”, and he called for the defeat of extremists such as the Islamic State or Jabhat al-Nusra.

However, Kerry did indicate that President Assad will eventually have to leave power — “There will never be peace in Syria if Assad is there” — and said the President should announce that he is not running for re-election.

Kerry said that it was “unacceptable” that Russia treated all “moderate opposition” as “terrorists”. He also said that it should be “made clear” to Hezbollah and Iranian forces that they have “no place in Syria”.

The Secretary of State criticized “indiscriminate” bombing by Russian and regime forces and said this is a potential war crime: “Ultimately there must be accountability.”

Aerial images of a new camp built for Syrians displaced this month by the regime-Iranian-Hezbollah offensive in northern Aleppo Province:

Opposition activists claim that the Kurdish militia YPG attacked the National Hospital in the town of Azaz, in northwest Syria near the Turkish border, in an offensive on Friday against rebels.

Rebels claim that they repelled the YPG assault, which followed a Kurdish advance this week with the capture of nearby villages and the Menagh airbase.

Abu Mohammed al-Halabi, a nurse in the National Hospital, said equipment was moved to the village of Shammarin near the border.

The hospital is one of the largest in opposition-held areas of Aleppo Province, with four operating rooms, almost 30 doctors, and dozens of nurses.

The hospital was partially closed after it was hit by a Russian airstrike last month. It resumed services, but on a reduced scale.

Russia’s bombing has damaged and closed hospitals throughout the province, including the main hospital near Azaz and two inside Aleppo city.