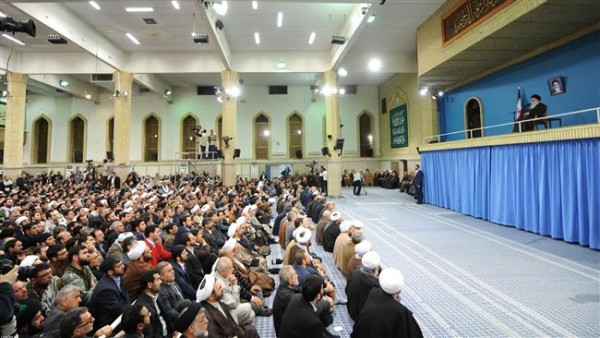 PHOTO: Supreme Leader addresses an audience in Tehran on Wednesday

Iran and Saudi Audio Analysis: Will There Be a Battle over Oil Production?

With elections scheduled for February 26, both the Supreme Leader and the Revolutionary Guards have warned Iranians not to repeat the mass protests after the disputed Presidential vote in 2009.

In a Tehran speech on Wednesday, Ayatollah Khamenei raised the specter of a US-supported “sedition” — the regime’s label for the demonstrations after Mahmoud Ahmadinejad “won” the 2009 ballot over Mir Hossein Mousavi, who has spent five years under strict house arrest.

He specifically defended the Guardian Council, the 12-member panel which disqualified thousands of candidates from the vote for Parliament and the Assembly of Experts:

Since the first day of the [Islamic] Revolution, Americans have opposed certain basic organs, including the Guardian Council, but they could not do away with it. Now they want to call into question its decisions. They want to keep the country in a four-year legal vacuum.

The commander of the Revolutionary Guards, General Mohammad Ali Jafari, sent his message through praise of security forces for suppressing protests in 1999 as well as the 2009 marches.

Jafari told officials that continued “coordination” was needed because of “security, intelligence, and soft-war” challenges as well as “socio-cultural and economic threats”.

Hardliners fear that centrists — linked to President Rouhani and former President Hashemi Rafsanjani — will ally with reformists to gain influence in Parliament and the Assembly, the 88-member body that chooses the Supreme Leader.

The Guardian Council has disqualified more than half of the 12,000 applicants for the Parliamentary vote and 80% of the candidates for the Assembly, including many centrists and reformists.

Centrists and reformists responded this week with the creation of joint lists of candidates in areas such as Tehran, under the title “Coalition of Reformists and Government Supporters”.

“The beginning of deliveries of the first consignment of Favorit missile systems cannot take place since the Iranian side has not paid the price enshrined in the contract as of February 16,” a “high-ranking representative” told TASS.

With Iranian Defense Minister Hossein Dehghan visiting Moscow this week, a senior official of Russia’s arms export agency told RIA Novosti that the first S-300 deliveries were begin made. Sputnik said Dehghan would participate in a ceremony in Astrakhan on Thursday marking the shipment.

But the Defense Ministry representative told TASS, “The presence of the Iranian defense minister in Astrakhan at the mythical ceremony of dispatching the first Favorit systems to Tehran is out of the question.”

President Vladimir Putin said last year that the supply would be renewed, but — despite Dehghan’s claims of receipt by the start of the Iranian New Year next month — no date has been confirmed.