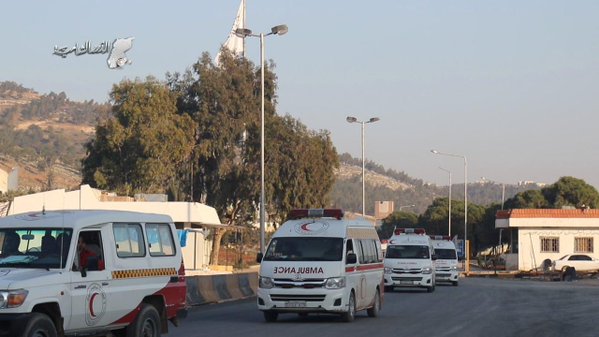 PHOTO: The Red Crescent evacuates residents from the regime enclave of al-Fu’ah, December 28, 2015

Residents of two regime enclaves surrounded by rebels in northwest Syria are calling on President Assad to “work seriously” to lift the blockades.

Two pro-regime journalists carried out interviews in al-Fu’ah and Kafraya, north of Idlib city, where an estimated 12,500 people have been encircled since rebels moved into almost all of Idlib Province this spring.

They reported that people criticized the “weakness” of UN efforts, after a humanitarian mission into the enclaves was postponed when rebels cite a need to complete security arrangements.

“We call on the Syrian army and government to work seriously to break the siege,” an al-Fu’ah resident, Abu Jawad, said. “We’re fed up.”

The rebels have maintained pressure in an attempt to counter offensives and sieges by Hezbollah and the Syrian military on Zabadani and Madaya in Damascus Province. Despite a ceasefire agreement in late September, regime forces have continued to block almost all food and supplies to Madaya, where more than 60 people have reportedly died from starvation.

Deeb Saleh, a nurse in al-Fuaa, told the interviewers — Rida al-Basha, an Aleppo-based correspondent for the al-Mayadeen channel, and Deeb Sarhan, editor of the Syria Scope network — that the sole hospital in the village “is almost shut down because of the lack of medicine and mazot [diesel fuel]”.

She said that dozens of residents have died of heart attacks, kidney failure, and other ailments due to a lack of specialists and medication and that there are “dozens of illnesses due to cold and malnutrition”.

Under an arrangement which also provided assistance to Madaya, a UN delivery of 10,000 liters of diesel fuel last Wednesday kept the hospital open. However, others in the enclaves live without heat.

“Illness has become everyone’s wish, to go to the hospital and to get some of the warmth lost in the corners of these frigid rooms,” a poster wrote on a Facebook page for al-Fu’ah and Kafraya.

“Every day, our main concern is how to find wood for heating,” said resident Abu Jawad. “There isn’t a scrap of wood in our houses that we haven’t put to use.”

A rebel defended the blockade:

Hunger and siege are among the ugliest weapons being used in Syria, but the regime was the first to do so by blockading opposition cities.

If we had not blockaded al-Fu’ah, then food would not have entered Madaya. Al-Fu’ah is not the first city to witness blockade and hunger.