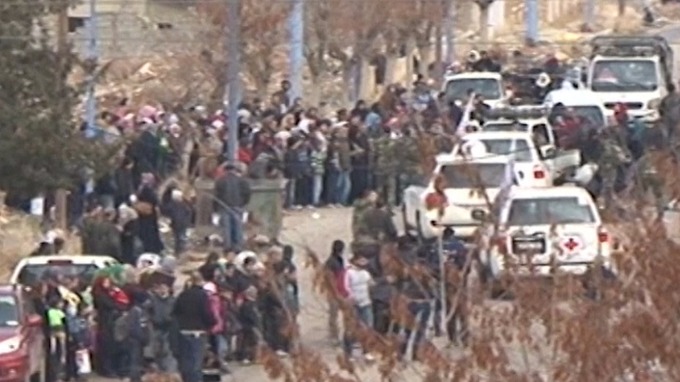 PHOTO: Residents of Madaya await aid, as a Red Cross convoy of officials passes on Monday

Pawel Krzysiek of the Red Cross was among the officials with the first aid convoy that reached besieged and starving Madaya, northwest of Syria’s capital Damascus, on Monday. He described the scene in an article for The Guardian:

The first impression is really heartbreaking. You see a lot of people on the street, some of them smiling and waving to us, but many just simply too weak with a very, very bleak expression, very tired.

The trucks are offloading as we speak. We split up and are going to deliver aid to different local establishments who are managing distribution of humanitarian supplies. The ICRC will proceed to the local health committee to discuss how we can best accommodate the medical cases, how we can deliver essential medicine for children, for chronic and acute diseases, emergency surgical items to the people who need it the most.

It’s really heartbreaking to see the situation of the people. A while ago I was just approached by a little girl and her first question was: “Did you bring food? I hope that you brought food to al-Fu’ah and Kefraya [regime enclaves in Idlib Province in northwest Syria] and to Madaya because we are really hungry.” And I believe her, she looked hungry.

It’s very dark here as there is no electricity. But I see people on the street, women, children, many of them are coming and thanking us for coming, greeting us. But some of them were shouting and asking, “Why so late?”

It’s very heartbreaking, there is a certain enthusiasm but we only managed to bring in four trucks so far that we have offloaded. There are 40 trucks coming on the way, and 21 to Fu’ah and Kefraya. It will be a lot of stuff coming in but the people are anxious, coming every five minutes and asking: “Where is the food? Did you bring medicine? Did you bring baby milk?”

We are talking to the medical staff and the Syrian Arab Red Crescent is doing a great job. We will try to focus on those most vulnerable cases here and see what will happen. The most important thing right now is to offload those trucks as soon as possible.

It’s totally black outside right now and people are burning trash to try to warm themselves a little bit. There are not much visible signs of fighting, it feels deserted but not abandoned. You feel you are in a deserted town but you know there are people there. It reminded me of Fallujah [in Iraq] in a way.

Right now the people are just getting sick from illnesses that can be easily prevented and treated. You have pretty much everything here. Chronic diseases like diabetes, people weak, people swollen because they have to eat this water with spices. We brought the medicine for chronic, acute and children diseases.

Our main main message is that this is not the long-term solution — either for Madaya, Fua and Kefraya or any other besieged place. The most important thing is that we are able to access these places on a regular basis.